I’m sorry I’m late finishing this post. I did *not* float away or become waterlogged this week; that was the north side of town, where they took a month’s worth of rain in an hour. You’ve probably seen the pictures of people rescuing terrified horses through several feet of water, a confused armadillo, some dogs, as well as people being pulled from their cars. I’m on the south side of this huge metropolis, where we had that kind of water last May. Twice.

Good thing that adorable baby tiger found wandering in Conroe, also north of Houston, wasn’t in my neighborhood. I might not give it up. . .until it reaches 100 pounds or so. (I love tigers.)

The garden has been enjoying all the rain, but I do need to get out and do some tidying up soon.

I also have been otherwise occupied this week, as well as not feeling up to any task. I didn’t attend last night’s gardening lecture at our local library, and missed seeing Miss Shirley again. If you’re reading this, Miss Shirley, my apologies–I just wasn’t up to going anywhere.

I’m sure all of you have heard by now that the musician Prince passed away yesterday at the age of 57. Like David Bowie a few months ago, fans are downloading his music from iTunes as fast as they can. I haven’t followed him in a long time, and the last new song I heard by him was called Black Sweat, in about 2006, I think. I got it from iTunes a few years ago, and it’s one of those wild, weird fun songs he was known for. I pulled out my copy of The Hits/The B-Sides that I haven’t listened to in a very long time, and will put some of them on my iPod to listen to.

So what’s going on in food?

Remember when I discovered Epic Bars a couple of years ago? I was in a shooting range in League City. No kidding. Guess what? You’ll be seeing more eateries in retail establishments starting this year, and it’s not just Epic bars. This article on SmartBlogs discusses retail eateries in the age of online shopping, and the revival of things like the old Woolworth’s lunch counters. Pasta consumption is down, and chefs are now doing the Spiralizer thing with veggies, something I haven’t tried yet.

It’s all in the Baum + Whiteman’s 2016 forecast. Increases in “clean” eating, dishes, and boasting about ingredient lists also figure in the paper. One buzzword this year is falafel–but you heard that word *last* year, right here, when I showed you how to make Waffled Falafel. Maybe 2017 will be the Year of the Waffle.

I’ve also read (elsewhere) that old-time soda fountains are making a comeback, but with a modern slant. Modern flavors like guava are added to what used to be a simple drink. Look for this to be the next “gourmet coffee,” where you order a custom-mixed non-alcoholic drink. I haven’t seen any of these in Houston, but if I find one (or more), you’ll read about it here.

Now, I’ve written frequently about gluten-free, sugar-free, and healthier versions of favorite foods. This one is apparently “sweeping the Internet,” so they say, and it’s all over Pinterest (but somehow escaped my detection.)  I’m a bit late to the game, but if you’ve never heard of Cloud Bread, I’m going to give you a primer, and show you how to make it yourself at home. And, let’s face it, anyone who loves bread is always wishing they could have it, right? So here we go.

I happened across this article in the Daily Mail recently, a London-based tabloid that has some pretty interesting articles from time to time (not to mention more real news than most US-based news organizations.) Of course, their writing can be pretty bad, which makes me think it’s outsourced, but that’s another matter.

Cloud Bread is made similar to a pancake recipe I used back in the 80’s in Sharon Claessens’ Lose Weight Naturally Cookbook. It was a pretty good book for the time. The pancakes I loved to make involved whipped egg whites, then mixing the yolks with cottage cheese (eek!) and a few other ingredients (I don’t remember if wheat flour was involved.)  They cook up like regular pancakes, but were described as “light little souffles.”

Darnit, now I wish I had my copy of it. Oh, well. . .I can buy it again one day. (Soon as I buy a house with a big enough study in it.) Many of these recipes had things like whole wheat flour in them, but it was the 80’s. Still, I remember them being mostly pretty good.

Finally, I made some. Verdict: not bad, good recipe to make all the time, if you can keep cream cheese around. I can’t, I keep nibbling on it. If I keep buying it, maybe I’ll get sick of it and just keep one or two in the fridge. I followed the basic recipe of 3 eggs, separated, 3 tablespoons of cream cheese, a quarter-teaspoon of cream of tartar (some suggest baking soda) and a packet of sweetener.

So, what do you do when you want to make this bread? You hit the grocery and buy eggs and cream cheese: 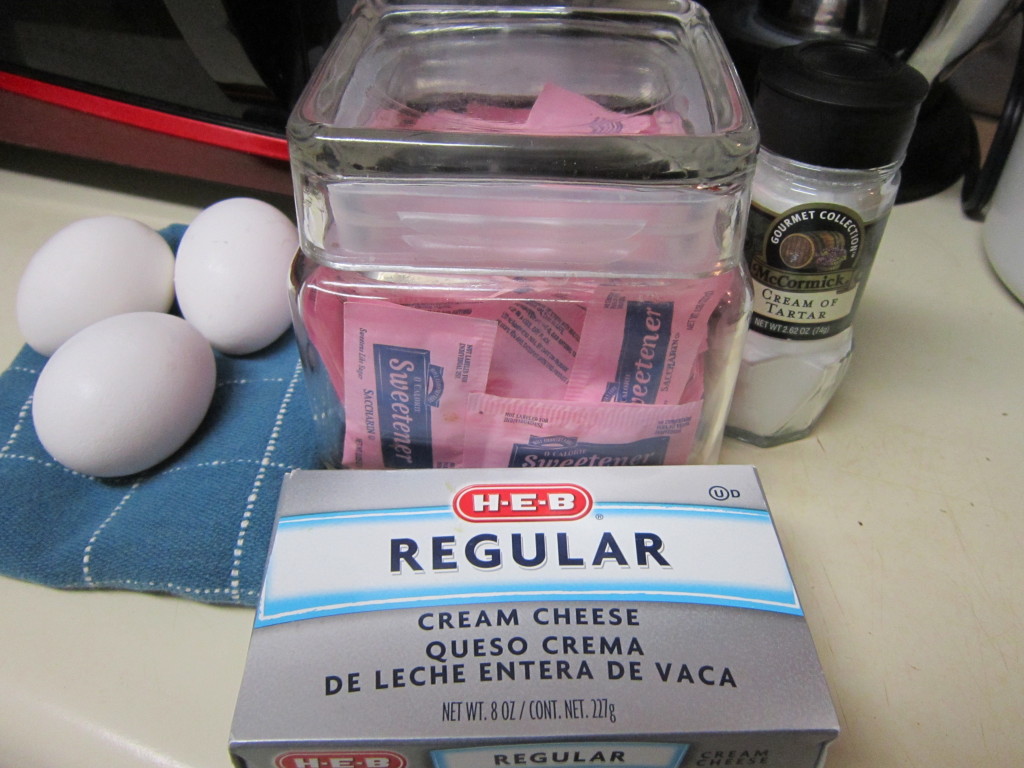 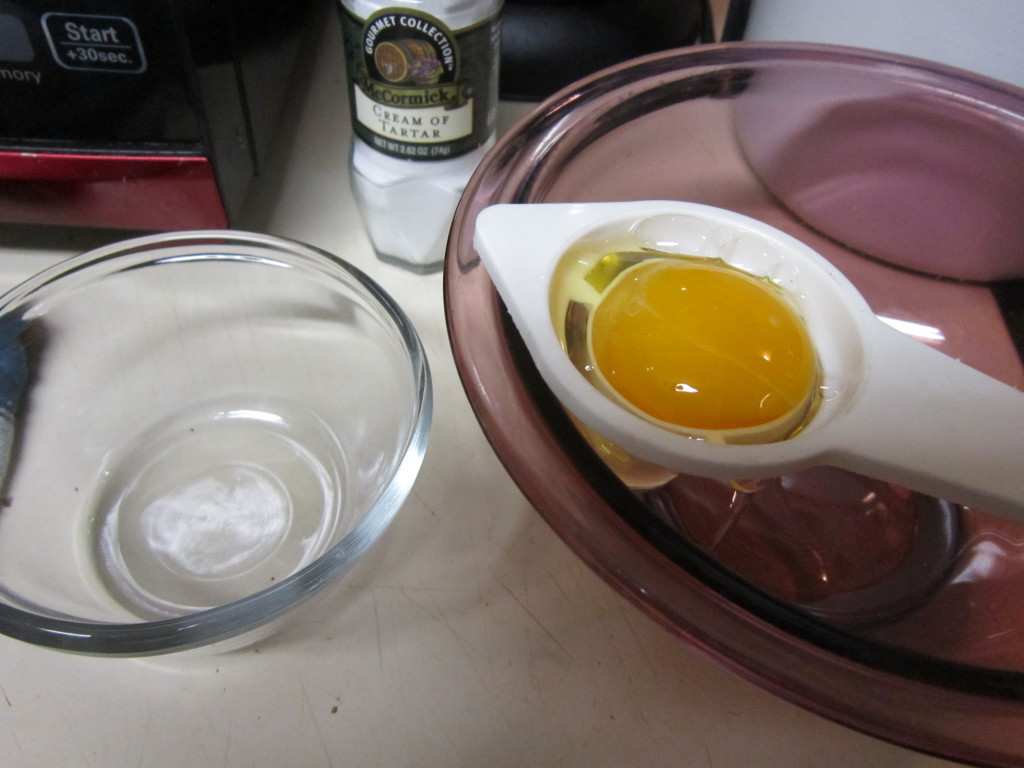 Yolks and whites need to be completely separated.

Then add a packet of sweetener, if desired, to the yolks: 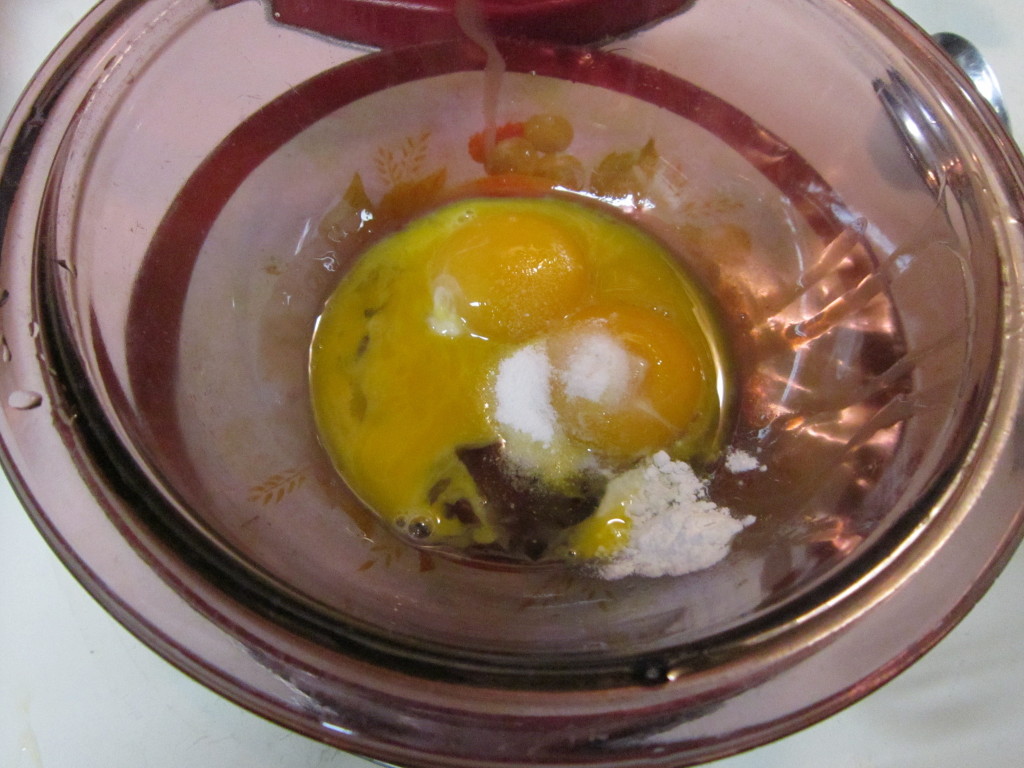 Next up, three tablespoons of room-temperature, soft cream cheese are mixed into the egg yolks: 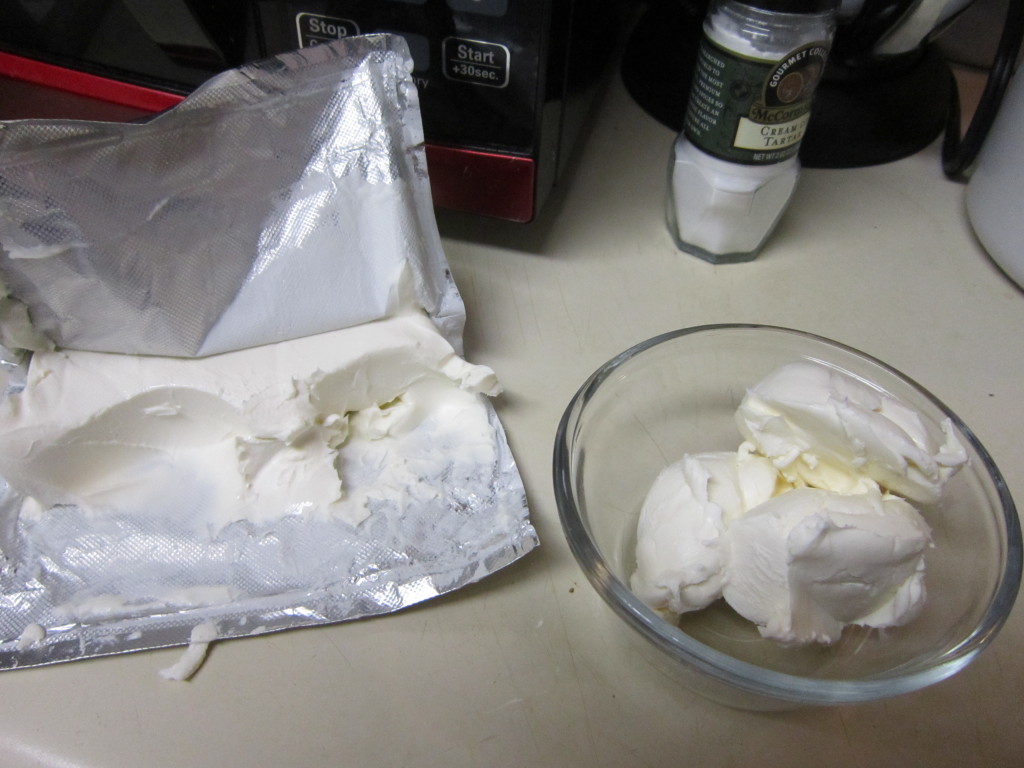 Right into the bowl: 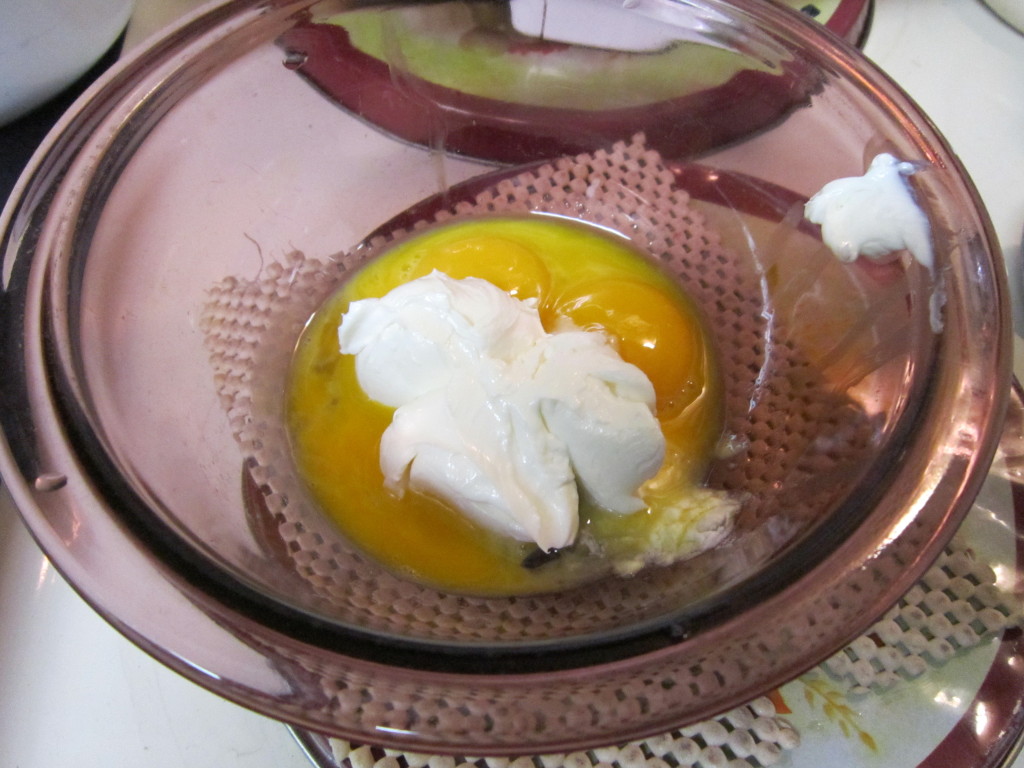 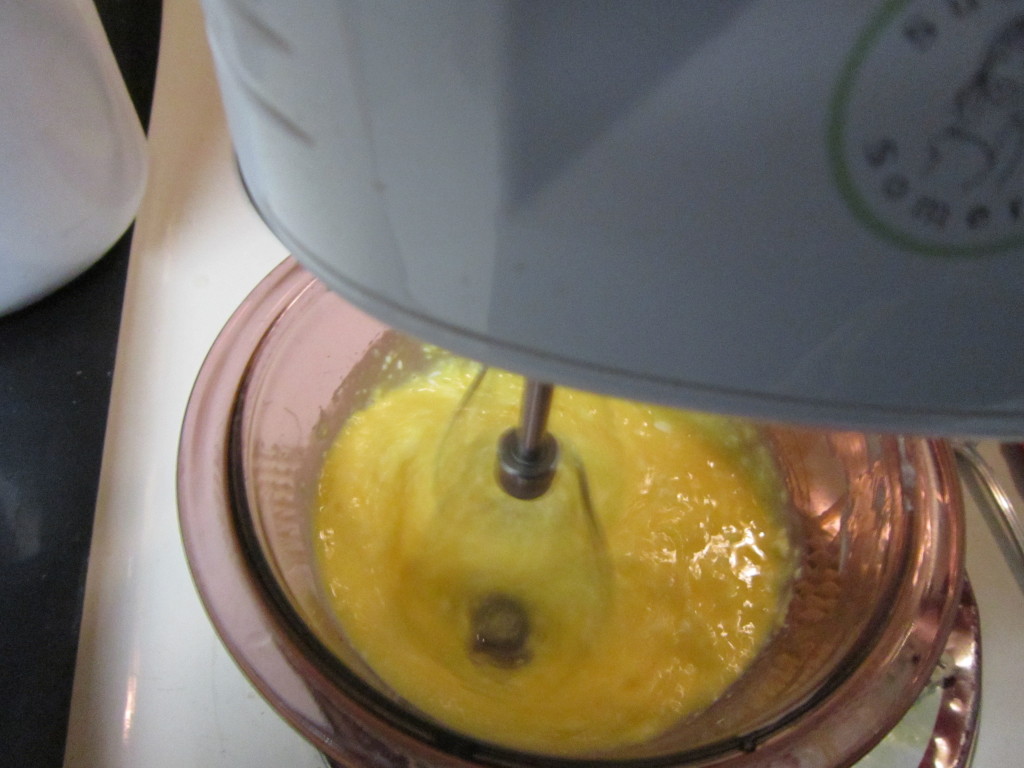 And set it aside. Next up, wash the beaters VERY clean and VERY dry. You’ll be whipping egg whites next. (You can also whip the egg whites first.) If your bowl and beaters are not absolutely clean, or have even a speck of yolk or fat, they will not whip at all. (I *was* paying attention to all those Martha Stewart shows.)

First, add the cream of tartar to the egg whites: 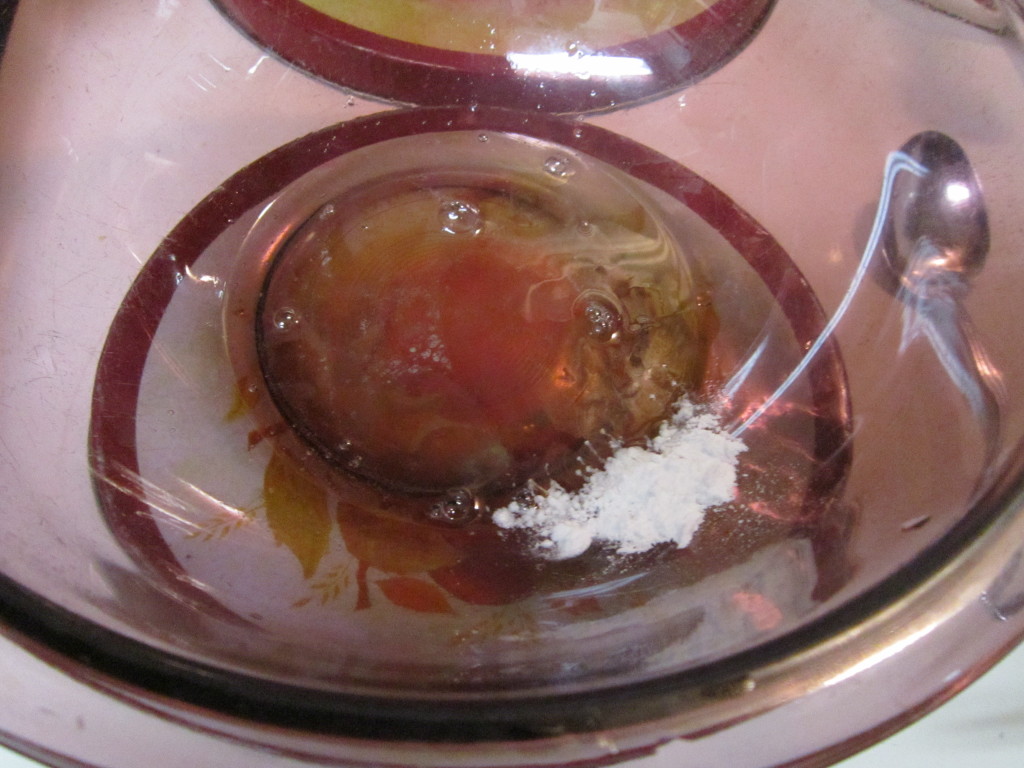 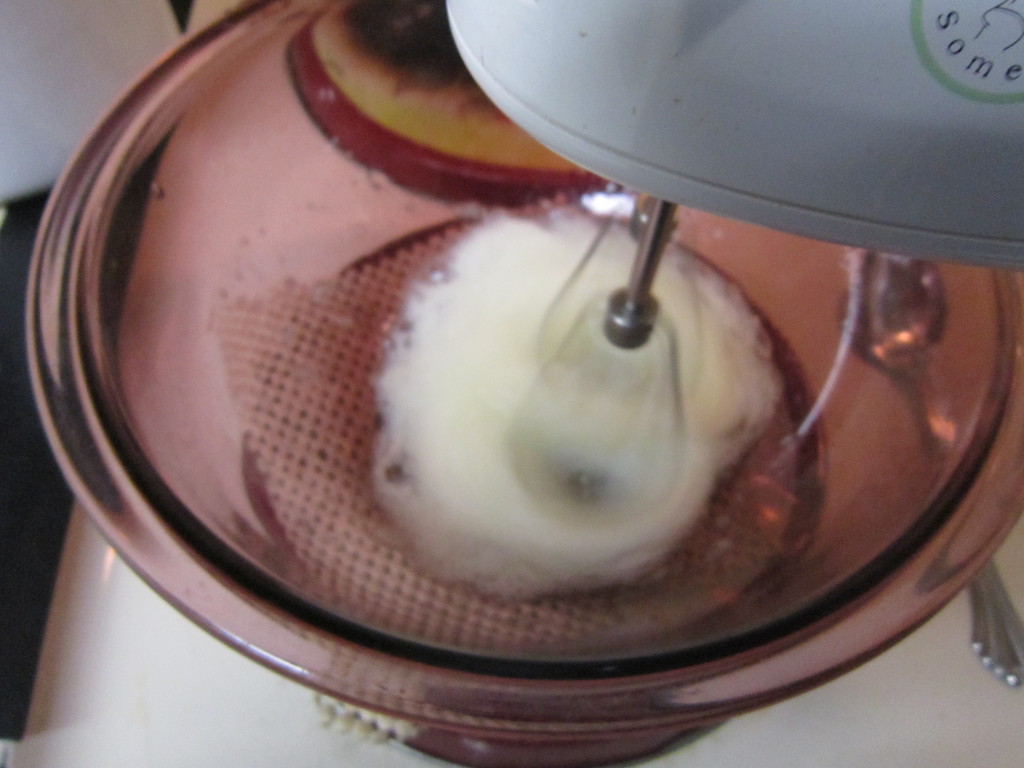 Whip all the way until you get the stiffest peaks you can get.

Once that’s done, you mix the yolk mixture into the beaten egg whites: 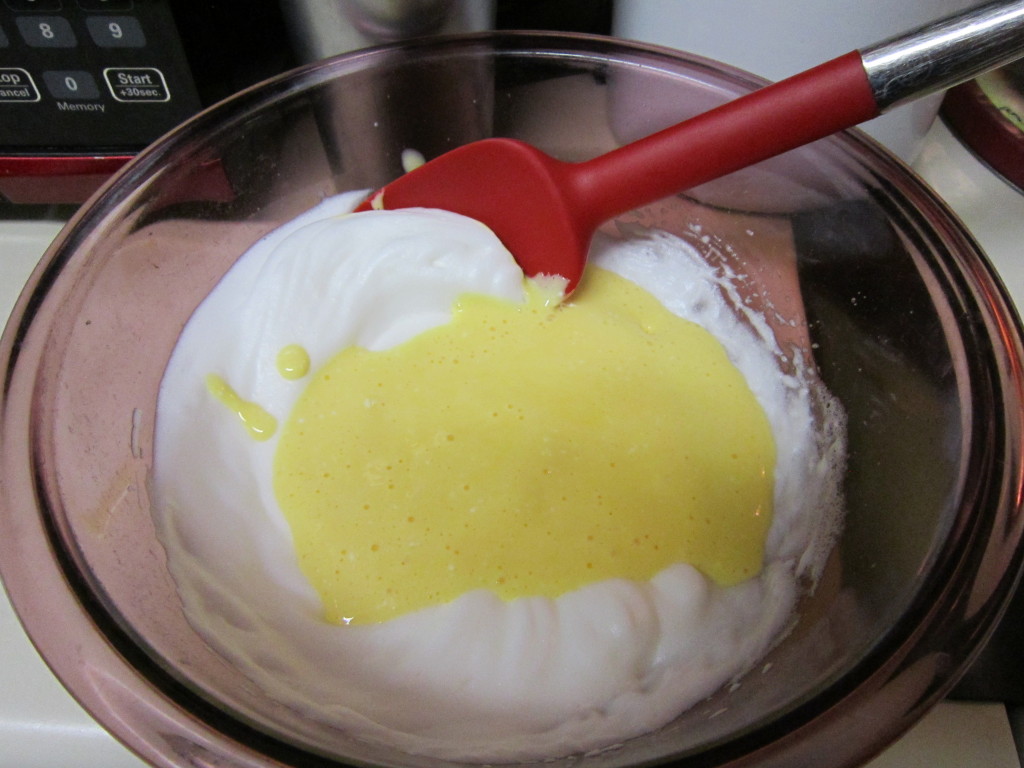 Mix carefully so you don’t deflate the egg whites. It should look like this: 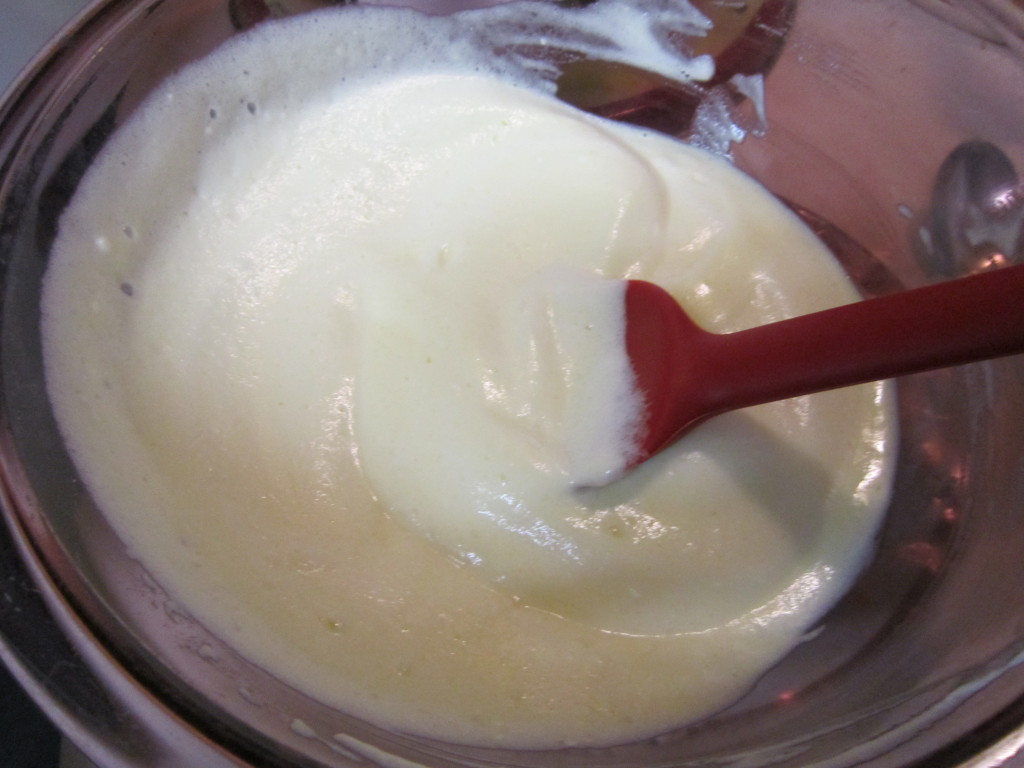 Next, take a parchment-lined baking sheet, (or spray with non-stick spray) and use the batter to make rounds: 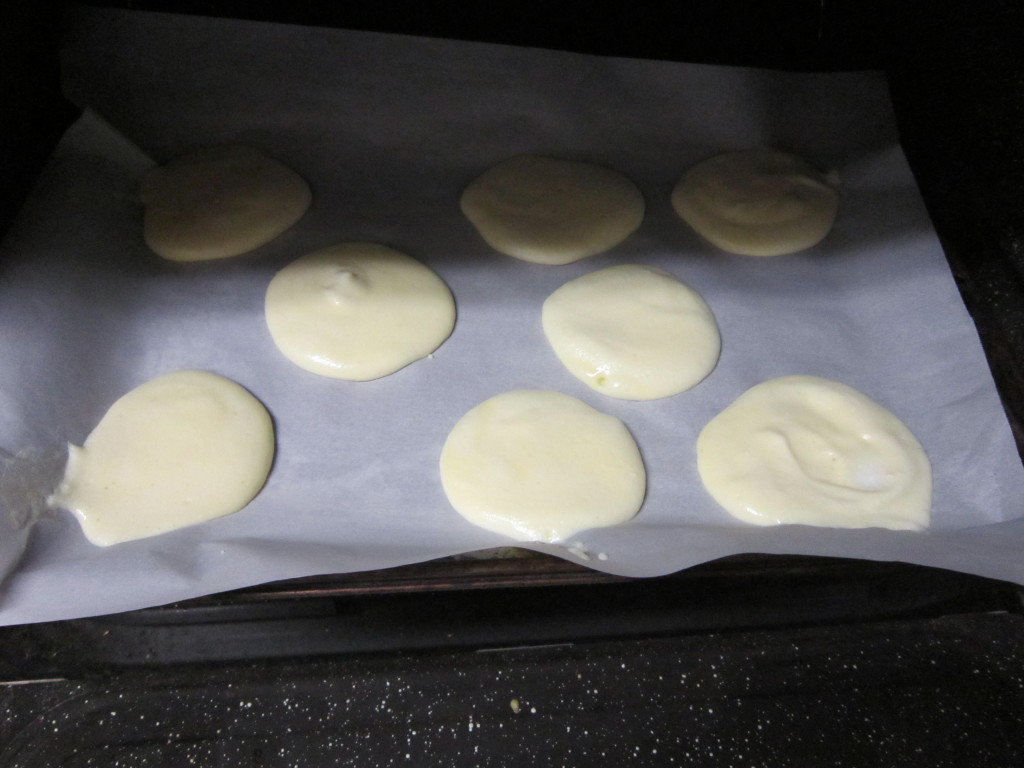 They won’t spread out when baking like cookies will, so what you see is what you get with these babies.  Bake for whatever time your recipe says (mine was 300F for 30 minutes) and they come out like this:

They’re not “tasty” on their own, but they do taste good. I just spread soft cream cheese on the first few I ate. Will they make a sandwich? If you’re careful. I’ve also toasted them in the toaster oven, and they came out a bit crumbly, but I’ve not not tried a standup toaster (because I don’t have one, actually.) My thinking is if you’re going to take them for lunch, wrap everything separately, and make the sandwich when you are ready to eat it. On Momables, she gives instructions on how to use them for kids’ lunches.

This video shows you exactly how to make these rounds.

In this DM article, one of the paper’s writers actually tries the recipe–and bungles it. Here’s where the writer messed up: she added agave syrup to the mixture. It’s fine as is–introducing more liquid into whipped egg whites does what? Flatten them. It’s extra weight and extra moisture, since agave syrup is heavy like honey. Big DUH–the young blonde girl didn’t think. Adding anything that brings in extra weight or moisture will mess the whole thing up. Wait until they’re baked and make a sandwich with them.

One comment from the Daily Mail’s article: “it’s NOT a new invention. . .it’s a lift of a recipe from a diabetics cookbook from before they had insulin…” What your grandma told you is true: everything old is new again, isn’t it?

This is the recipe from Momables:

There’s also this article from Yahoo, and this one from Woman’s Day. Apparently Cloud Bread is “the next trend taking over Pinterest.” Yeah, well, I want to know why all the Pinterest folks haven’t yet figured out how to add grapes to the Crock Pot and have it turn into red wine, OK?

And here’s a different recipe on Food.com, which tells you to put the bread into a Ziploc bag overnight. THEN it becomes more soft like sandwich bread.

Checking out Pinterest, I’ve also seen pizza and breakfast sandwiches made with Cloud Bread, but I haven’t gotten as far as trying them all out. Mostly, it’s a case of Amy wanting to have her cake and eat it too. You can–go look on Pinterest!

Now I wonder–will it waffle? That was the other delay, I was going to make a breakfast sandwich with eggs and bacon and the like and see how it waffled. Well. . .I haven’t gotten around to it yet, OK? If I do, I’ll let you know.

But honestly, I thought they were pretty darn good, and even if you’re not doing low-carb, diabetic, grain free eating, these wouldn’t be a bad little addition to your cooking routine for a quick bread and something different. And all you need is some cream cheese on your grocery list to make it.