Imagine my surprise when I saw this on Facebook this week:

As some of you may have heard, the December issue will be the last stand-alone print edition of Everyday Food. All EDF subscribers will receive our beautiful, inspiring sister magazine Martha Stewart Living instead. (Oh, and five of those Living issues will come with an Everyday Food supplement—no shortage of fast, fresh meal ideas here in the Martha Stewart test kitchens, that’s for sure!)

We’re sorry to say goodbye to our magazine subscriptions, but SO excited for what’s next. We’ll have big news to share here shortly! (Hint: It involves the same great recipes, clever tips, and delicious ideas, but this time online and updated every day.)

Another sign of the economic downturn, I suppose. I love Everyday Food, and I guess I’ll just hang onto my copies and buy the compendium books. I have the “Light” book that came out on December 28th, and the food is great; I’ve made a number of them.

I’m sure this means another app, which means if you don’t have an iPad, you’re out of the loop. I actually had an iPad for a while until I was laid off, and had to return it. You can have apps all you want, but it’s not a complete computer. Be aware of this before you plunk down $600 to buy one.

Everyday Food magazine is, or was, the companion to Martha Stewart Living for, well, everyday cooking. While flagship magazine MSL was great for entertaining and special occasions, readers longed for more, well, everyday food. Martha and her staff paid attention to online comments and emails.  Readers wanted more easy to cook stuff that didn’t require a trip to a specialty grocery store or mail order, like the cranberry preserves I ordered for a fantastic Thanksgiving dessert on the front cover of MSL a few years ago.

When I called the New England Cranberry Company to order the cranberry preserves, the gent on the phone had no idea why there was a sudden uptick in orders for that one thing. I explained it to him, and then he understood. It was a good product, and boy, what a dessert. But that’s for Thanksgiving. Every day is not Thanksgiving.

My favorite recipe for leftover turkey was found in a Glad advert in the November 2006 issue. I still have it; maybe I’ll scan it and put it here soon. It was the most delicious thing, and I ate it throughout the holidays. Seriously. Always a great time to have another bowl of it, so it definitely qualified as Oddball Eating.

The other night I decided to make something unusual from this month’s Everyday Food, called Lamb-and-Apricot Stew. It’s not on their website, so I can’t give you the link. But what I can tell you is that it’s pretty good. They also say it’s good with beef or chicken thighs, but I wanted to try the lamb, just once.

It’s a “one pot” recipe, but it takes a while to cook, and in the oven. Guess I should have used a casserole dish to bake it in the counter top oven, but it was cool enough to turn the big oven on.

I can’t say it’s super-duper, but it’s pretty good and worth the trouble. Adding dried apricots to the stew is a nice touch. If you decide to make it, this is what it looks like: 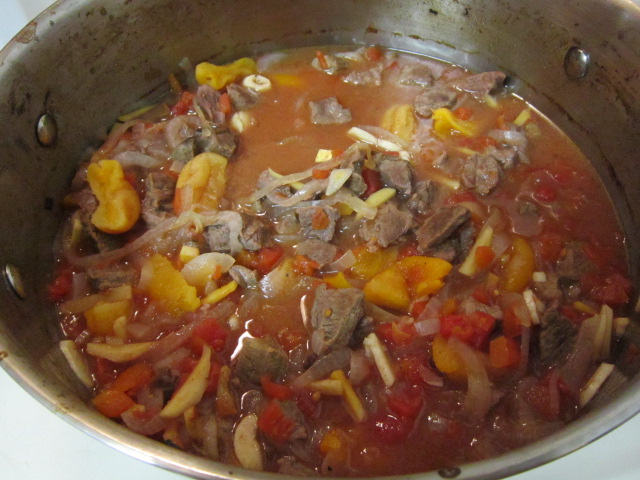 Not quite as nice as the magazine picture, but not too far off.
And this is what happens when I make something that has six servings:

Six meals, all tidied up for the week.

I make some quinoa and put the stew over the quinoa although that’s not suggested in the recipe. I prefer quinoa to rice for a number of reasons, but you could certainly use rice or any kind of pasta if you like. Recipe is highly recommended for it’s interesting taste, ease of preparation and unique addition of fruit.

Let’s see what’s in the last edition of Everyday Foodand be glad it happened.