I’m sorry–I’m stuck in a rut and I can’t stop PUNNING. Please forgive me. I’ll try to do better in the next post.

Well, as promised, I’m here to report on my first recipe from the Wheat Belly Cookbook by Dr. William Davis. No, I haven’t finished reading either one, but since this is primarily a FOOD blog, I thought y’all might be interested to know about this tasty morsel.

Get it? Tasty Morsel!

The reason I really wanted that cookbook was simple: while sitting at the conference a couple of weeks ago, I asked one of my table mates if I could look at it. Nice people being what they are, she obliged. Everything looked really good (even the ones without pictures) and I just , um, ate it up. (Punned again!)  Having done the low-carb thing for many years, I get the idea of living without wheat; but this book offers new recipes that are interesting and give more options than the meat-and-veg variety.

The Basic Biscuit (Wheat Belly Cookbook, page 245) recipe is what made me buy it. Seriously. Biscuits, wheat free, and you can make breakfast biscuits with them just like, well, McDonald’s! (There is also a sweet variation.) I was intrigued, and this morning, I had one. Sorta. I actually MADE the biscuits this morning, finally, and when they came out of the oven, I had three, one by one, hot, with butter and salt. They are SO good.

I have to point out that they do not taste like wheat (or canned) biscuits, nor are they “light and fluffy,” since there’s no wheat or gluten in them. They are delicious, chewy and substantial without being too heavy. Remember, it’s turning one type of ingredients into something completely different (or as a lawyer would say, into something for which it was not originally intended.)

So what’s the story? OK, the ingredients are:

OPTION: 1/4 cup grated Swiss Cheese (book suggestion, I just had some grated Swiss in the freezer at the time)

Line a baking sheet with parchment paper, and heat the oven to 350F.

Mix the almond flour, ground flax seeds and baking powder. Cut the butter in with a pastry cutter until combined.

Spoon the dough int 8 rounds onto the baking sheet. Flatten to approximately 3/4″ thickness. Bake for 15 minutes, until golden brown. 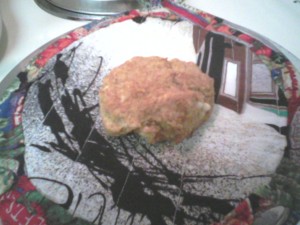 Looks pretty much like any other biscuit, doesn’t it? (Plain looking sitting on my handmade potholder.)  I put them in a fridge storage container while they were still a bit warm. Know what? They didn’t get soft and mushy. I’ve had that happen with other wheat-free recipes, and I guess it’s the golden flaxseed that did it. No complaints.

I split up the mixture into 8 parts by pushing the mixture gently into the bottom of the bowl, dividing it four ways (much like Rachael Ray does with ground meat) scooping out a quarter, then dividing that in half. This “dough” works easy; just don’t manhandle it too much.  I bought a round cookie cutter today to try making them rounded easier, as well as cooking my eggs in a circle to fit onto the biscuit. Neat, huh?

I promise, I was GONNA make an egg/sausage sandwich out of it. I really was. I tasted one, and it was all over at that point. I ate a second, and a third. Then I finally quit. They are that good.

I use unsalted butter all the time (as one should when baking) but I found that the finished biscuit needed a bit of salt. So after the butter melted, I sprinkled a bit of kosher salt on it. Because EVERYTHING I eat now needs some salt on it, darnit.

Next for breakfast will be on page 164, the Good Morning Souffle that I can make and eat all week long. I definitely want to try the Raspberry Chocolate Cheesecake on page 256 one day. Trust me when I tell you I will not be sharing any of that one, either. Now look–I told you about this. I will knock over Michael Jordan, Shaquille O’Neal AND Magic Johnson–at the same time–for anything combining chocolate and raspberries in one place. So make your own if you wanna try it.

Now the back story: ground almond meal/flour is more expensive. Since wheat and wheat products have become relatively cheap because of modern agribusiness, healthier, non-GMO non-standard ingredients tend to be pricier. That’s the price you pay for trying to be healthy, or if it’s a child, keeping that child healthy and well, and not on drugs that can make them sick with something else. We don’t want that. Generally, diet is cheaper to change than drug therapy, anyway.

My dad used to field comments from his spinster aunts when they would tut-tut about how much his kids ate by replying, “It’s cheaper than doctor bills.”  That was a long time ago, but it’s still very true. Healthy food is cheaper in the long run by the absence of illness produced by the unhealthy foods, as well as the subsequent treatments. If you don’t believe me, walk around your local Wal-Mart and observe. Healthy food is not always the most expensive; it takes learning more about what you’re buying before you shop.

I keep almond flour around for another favorite recipe that only uses a tablespoon of it. Recently I found it on sale at my local Target, and I bought extra. Over the holidays, my health food store was out of almond flour, so I got hazelnut, which was sitting right next to it. It was more, but it worked, and while I like both nuts, I can’t say one affects the taste all that much when used in the same manner.

Now, I’m by myself, so I don’t have to worry about other people complaining about the food (which is reason #9,753 of why I’m not married/attached anymore.) If I make something that’s not suitable for a royal luncheon, well, it’s my fault, I gotta eat it (unless it’s inedible.)  But if you have someone in your household who is allergic, this is important to know about, and how to work with. You need to know what they are allergic to so you don’t sicken them with something they shouldn’t have, and be able to feed them so that they don’t feel left out. Like the Babycakes books series, these recipes were designed for people who are either allergic to wheat or, like me, want to avoid it anyway without missing out on anything.

And in many cases, when entire families change their diet because of one member, the entire family benefits. Just an FYI.

And, BTW, wheat/gluten sensitivities, like its evil cousin, yeast overgrowth (Candida albicans) in the gut, can also cause behavioral issues and mood swings in both adults and kids. Not a joke. In the extremely sensitive, elimination of wheat can bring drastic results–but you don’t know that until you try it, particularly on children.

Remember, too, as I reported to you earlier–today’s wheat strains are NOT what they had in Biblical times, nor is it what your grandmothers and maiden aunts used to bake with. Today’s available “wheat” is the accumulated result of continual genetic modification for a) increased production, b) disease resistance, and c) saleability. Nobody bothered to check to see if consumption was harmful, and now, nobody will admit to it.

You gotta admit, these people have worked hard on wheat-free, and have done a stellar job in their own way–Dr. Davis being the medical side, and Erin McKinney on the “end user” side. That’s what America is all about, believe it or not. Some people still like to do something new, something different, something great for their fellow man.

And as a grateful, hungry nation, we eat it up.

Enough with the puns! This is good food for you and yours, and nobody has to miss out on much just because they’re allergic to wheat/gluten. You can, literally, have your cake and eat it too.

I’ve got work to do folks, so off I go. Try something new this week, whether it’s a locally-made wine, or new fruit at your local Farmer’s Market, something wheat-free, something more natural, or just something you’ve seen but never considered trying before (like my favorite treat, Larabars.) You might find a new favorite you’ve been missing out on.