Well, I’ve had a week where I’ve fallen off the healthy wagon a few times. . .cake, mini-cupcakes and breakfast tacos in the office this week, and my resolve went south. Will try again next week. I’ll be heading back to serious dieting soon to shift off weight that came back when I was unemployed and not sleeping well. It hurts, particularly in the joints, so I’ve got to get rid of it now. I’ve done it before, just had obstacles in keeping it off, that’s all.

Oh, and remember my recent cappuccino issues? (Yes, I know–vital to the rest of the world.) Well. . .I actually bought a new espresso machine about a month ago and returned it. Didn’t work well, or the way I thought it would. But what I did discover with the new one is that by tamping down the espresso grounds in the little cup that holds the grounds, the pressure builds up well. I wasn’t doing that, apparently. So I may have solved that problem. . .I had some delish cappuccino just this morning, and made sure I pressed down the grounds.. Decaf, of course, and got 2 cans of espresso grounds with a coupon from Cost Plus World Market. Might head to Williams Sonoma or Sur La Table tomorrow while I’m in town and find a thingy that does just that, tamping down grounds. Yes, they make them.

I’m humming this week, although I’m real tired this evening.

So in between laundry, a free oil change and a free decaf at Starbucks early this morning, I thought I’d update you on the garden. Let’s start with this week’s harvest: 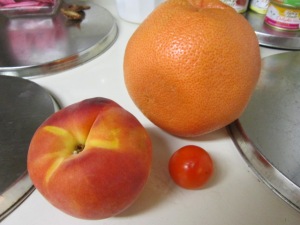 Yes, that little red orb the size of a ping-pong ball is my organically grown, sun-ripened tomato. This is what it looked like with it’s younger brother a few days ago:

There are a number of little yellow flowers on both plants, but that’s all the actual tomatoes for now. Maybe I’ll get some more tomatoes a little later in the year before Houston gets what we call “chilly.” The basil’s doing pretty good, too: 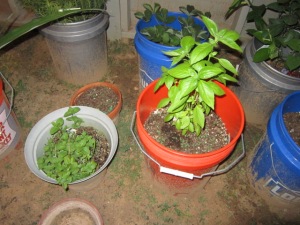 Looks like I’ll be making more pesto for the freezer, Lord willin’ and the creek don’t rise. My wish is to have enough for the whole winter. Fresh pesto, even frozen, is fantastic. Indulge if you’ve never tried it; recipes abound online.

Now, about that other plant. A pineapple you buy in any grocery store in America  generally looks something like this:

So when you chop off the top, let it dry, remove a few of the very bottom leaves, and plant it in soil, this is what eventually happens:

Yes, that monster bromeliad in a paint bucket is from that same pineapple I bought last fall, maybe November, and it’s threatening to take over. I am not exaggerating when I say those leaves are something like two feet long. From ONE pineapple top.

What am I gonna do with this thing? I didn’t think this would happen, I thought it would grow straight up. Guess I should stick with the kind of thing know: cats, cooking and sewing. I can always marry a farmer, right?

No, I don’t want anyone being a matchmaker. That was a joke.

If anyone wants this thing, you can have it, just give me some of the future pineapples now and again, please.

Weeds have also gotten into some stuff, so I’m pulling out the little buggers as I can. The green onions are a problem, though, so I’ll be spending a bit more time on those to make sure I don’t get the onions out with the weeds. Or worse, get weeds when I go out for onions. (Yuck.)

Now, I wouldn’t call this year’s garden an epic fail, but I can tell you who can. Yes, this nice lady who blogs about frugality can’t get a thing to grow, poor thing. But she and her husband embrace frugality, so it’s not like she’s not trying. Amanda Grossman has some great tips on frugality; she just hasn’t gotten the hang of growing stuff, that’s all.

Like me. Like that monstrous thing growing out back. Oh, I can get stuff to grow, all right. Just not exactly what I had in mind.

Well, anyway, I’m going to town tomorrow, and going to be checking out a few new things, which I’ll write about soon as I can. I am hoping to once again have a delish gluten-free cupcake with frosting, and I’ll tell you about that if I get one.