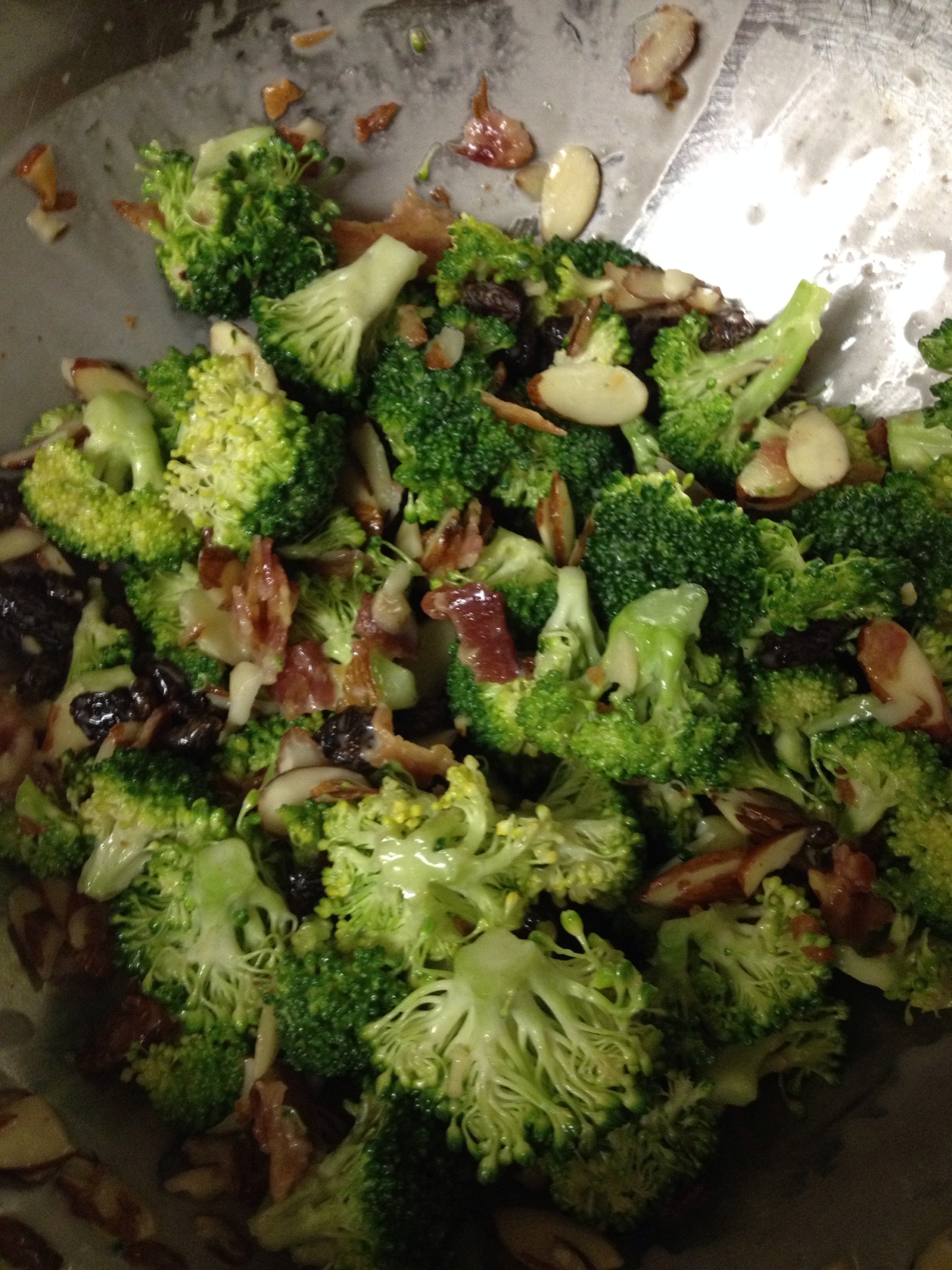 You know, sometimes we get ideas that seem like they’ll work, until we try them. Sometimes those ideas stay in our heads for years before we finally get around to trying them.

Take my favorite coffee flavor, Chocolate Raspberry. I had the idea to make cappuccino and flavor it with chocolate and raspberry. It was gonna be great!

Well, I tried it this morning. . .it was OK. Nothing special. The espresso overpowers the flavors, at least, these two. It works out well with the hazelnut flavoring, though. Maybe I’ll give it some more thought.

Well, I had to do it. Tonight I made some of that delicious Fall Broccoli Salad I told you about, via The Texas Pioneer Woman.

Since I live in a Houston suburb and not on a working farm (yet), I went to Target to get the ingredients. That’s OK, they had everything I didn’t.

Now, I hope Janette (aka The Texas Pioneer Woman) doesn’t mind, but I made it just slightly different. Partly because I forgot to put a little onion in it. But I’m getting tired, so I forgot. I was going to “do it later,” but you know how that goes.

The other thing I changed was the dressing. I did use the vegan egg-free mayo I wrote about last week, primarily because it tastes like the real thing. (I taste-tested it first with the end of a spoon, of course.) I just didn’t feel like making my own mayo, so I used the Just Mayo. Of course, it’s an 8 ounce bottle, and the dressing takes half a cup. I won’t use the rest of it quite so fast.

I also used Bragg’s apple cider vinegar instead of the white vinegar, (not quite as sharp) and instead of white sugar, you know I used. . .Somersweet.

Now I did have to cook up some bacon, so I did the easy way–in the toaster oven. On a cooling rack in a baking sheet, 400 degrees, and watch it, because it can burn pretty quickly and then you have to start over. I had to cook the bacon in two batches, though.

A side note: if you’re thinking about getting a countertop (aka toaster) oven, let me put this bug in your ear: 110v vs 220v. If you’re going to do what I do with it, make sure you get one that’s big enough to roast a chicken in and has a nice sized broiler pan. Don’t get one that doesn’t do more than toast bread and Pop-Tarts.

After I chopped all the broccoli and washed it, I left the colander in the sink to drain a bit more. I mixed up the sliced almonds and raisins in the big mixing bowl, then mixed the dressing. Once the bacon started crisping, I took it out, let it cool, then crumbled it all up in to the almonds and raisins. When the bacon was all done and crumbled in, I dumped that into the dressing bowl and mixed it up with a spatula. Then I shook out the broccoli one more time to get out as much water as I could, added it to the big bowl, then dumped the dressing mixture into the broccoli,, and started mixing some more.

I’ll try it once with the onion, maybe some green onions from the back patio, but I’m tellin’ ya, this was WAY TOO GOOD!!

I texted Neighbor K to see if she’d like some for lunch tomorrow, but she didn’t answer, so I’m guessing she’s already hit the sack. I packed it up in containers and stuck it in the fridge. When she reads this she will secretly be mad that she missed out on a healthy salad with bacon in it. But this weekend, Neighbor K will have the recipe to make it for that big, tall boyfriend of hers, and maybe even give a little to Daft Pug.

This weekend would be a good one to make this salad for family and friends, or if you’re like me, just yourself. But go try it, because it’s pretty easy and the flavor is well worth the bacon cooking.

I wonder if the Gomez Family Farm hosts vacationers and wanna-be cowboys. If I ever have the chance, I’m going to go on a vacation somewhere that I can do that. But don’t look for me to attend rodeos, OK? I’d rather go see Def Leppard or find myself at a jazz concert.

Make some of this salad this weekend for you and yours. It’s delish, whatever you sweeten it with.

Cupcakes and the Honey Bunny