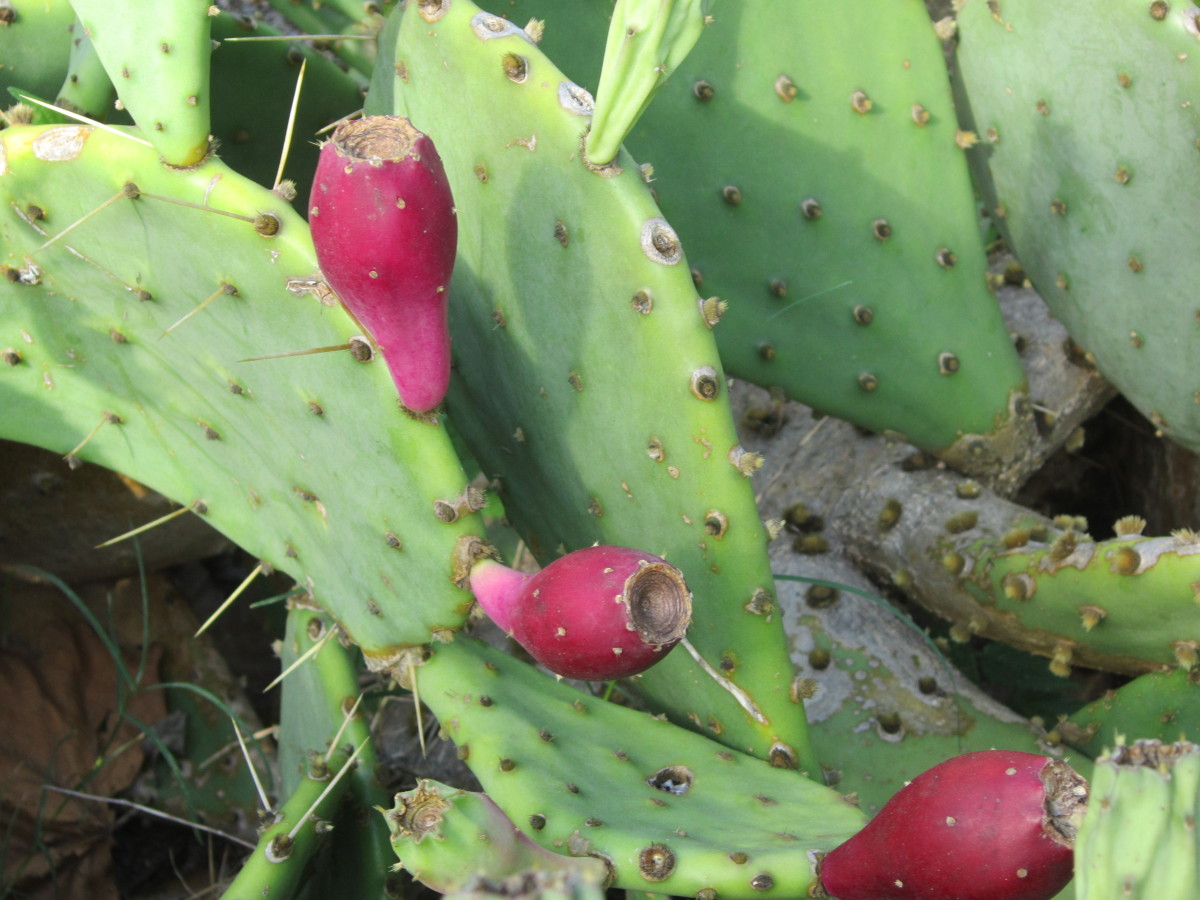 Remember when I said the next post would be about waffles, unless I had something better to write about? I do–and I’m not reneging on waffles, either. In fact, after I finish writing this, I’m going to try out a gluten-free waffle recipe just for you! (Well, and me, too.)  I’m anticipating three or four different waffles on the recipe page, and one may even involve using. . .wheat. We’ll see when I get there.

Are you a Trader Joe’s fan? Well, I finally had a flash of inspiration, and decided to do something about the lack of a TJ’s down here south of Houston. I put a link on NextDoor.com, and suggested everyone in my area write TJ’s and tell their friends to do the same. So far, several people have, including Neighbor K, who became a fan after hearing me bang on about it, and made her first trip.  If you’re one of my local readers, do this now and tell EVERYONE YOU KNOW. If we get enough people writing, we might actually get one closer than the Montrose store. I suggested Friendswood or League City, but anywhere closer than Montrose or Memorial would be wonderful. If you’re in an area that doesn’t have TJ’s at all, and you miss them terribly, you can go to this link as well and ask about getting a TJ’s in your area. Do the same thing–tell your friends. Go to this link and send them a short email about where and why. Save the text on a Word document in case the site goes bonkers, like it did for me. It worked the second time.

A couple of weeks ago, I was strolling through Target and found this with a clearance sticker on it: 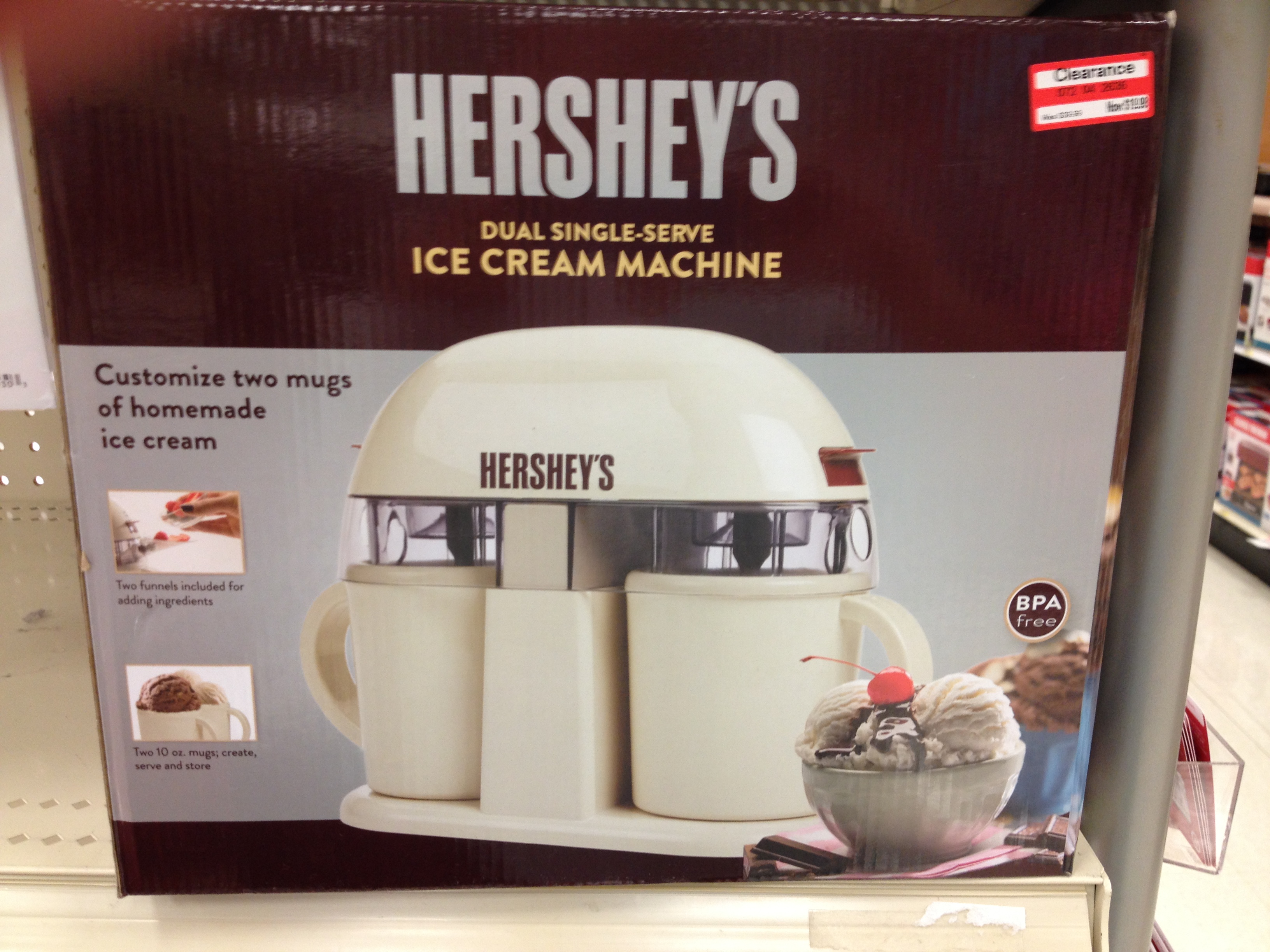 End of the summer, an ice cream maker. However, it’s one that requires this: 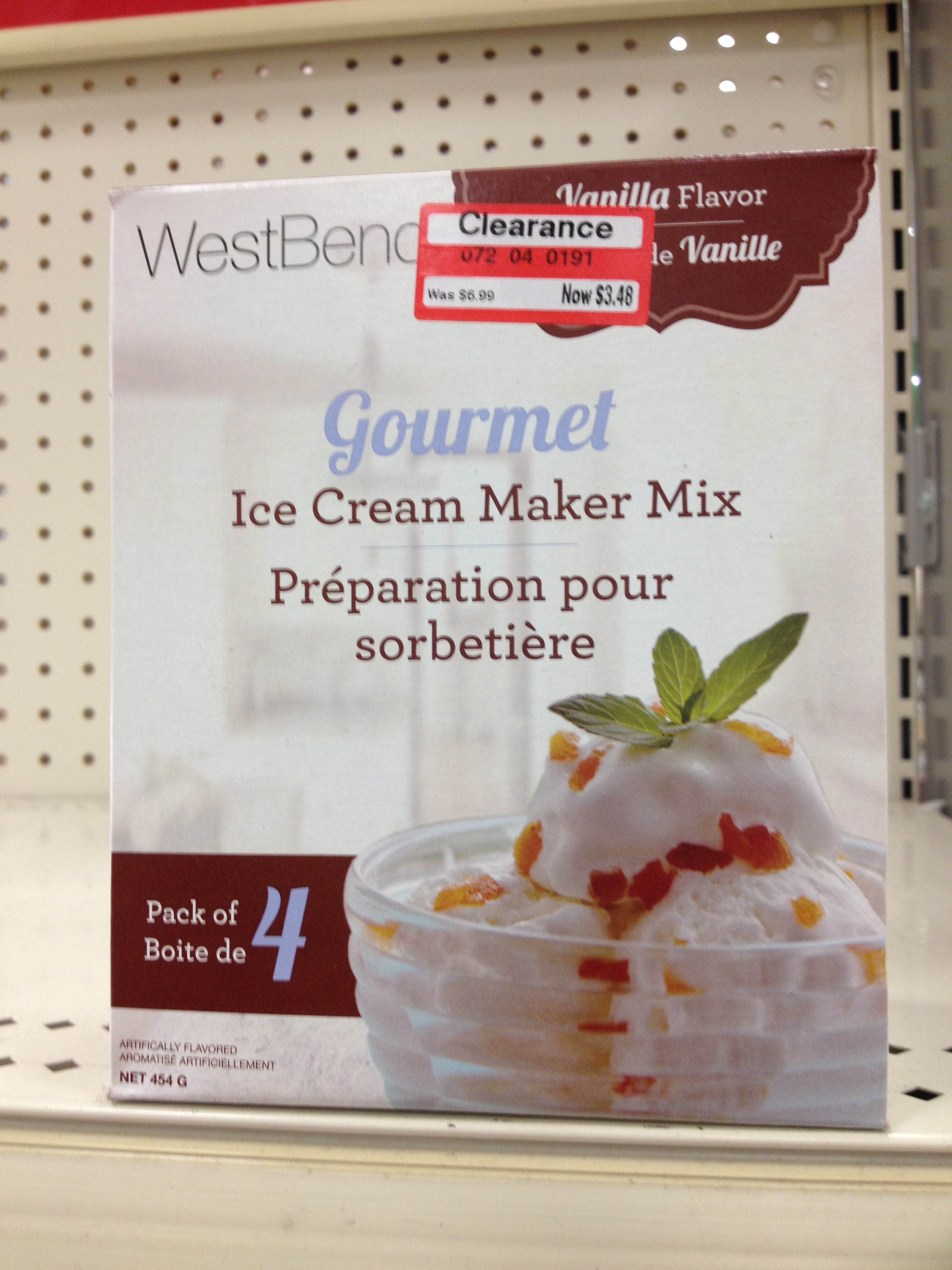 Now that we have Blue Bell back, we don’t need this. And of course, in fine print at the bottom, it says, “artificially flavored.” No thanks. I like my Cuisinart model and the recipes I have in cookbooks.

So anyway. . .guess who has more pesto in her freezer? Yes! ME! (You can envy me now.) As of last night, I now have SIX containers of pesto! No, I haven’t poured steroid fertilizers out back. I went on a little day trip on Monday. Let me back up a bit.

I’ve written about the monthly gardening lectures I attend at my local library, third Thursday of the month, 6:30 pm. Nice people, and sometimes, there’s munchies. (No, I passed on the cake last week.)  The lady who coordinates the lectures and attends every month is a nice person named Shirley Jackson. She’s always there, picks up the surveys, gives announcements and sometimes, she’s the friendliest face I see all day.

One of the announcements has been since the beginning the “open garden” day at the Genoa Friendship Garden in nearby Pasadena. That’s not someplace I normally hang out, and despite writing it down, I never seem to remember. Except for one day I dropped a pitcher of iced coffee on the floor, and. . .oh, never mind. Finally, Monday, I paid them a visit.

Sponsored by the Harris County Master Gardeners and Texas A&M’s AgriLife Extension, it’s a little spot where all kinds of plants are grown, and they have plant sales–cheap. I spent a whopping $3.50 yesterday, for two tomato plants and a sweet pepper plant that I’ll put into a big pot this weekend. 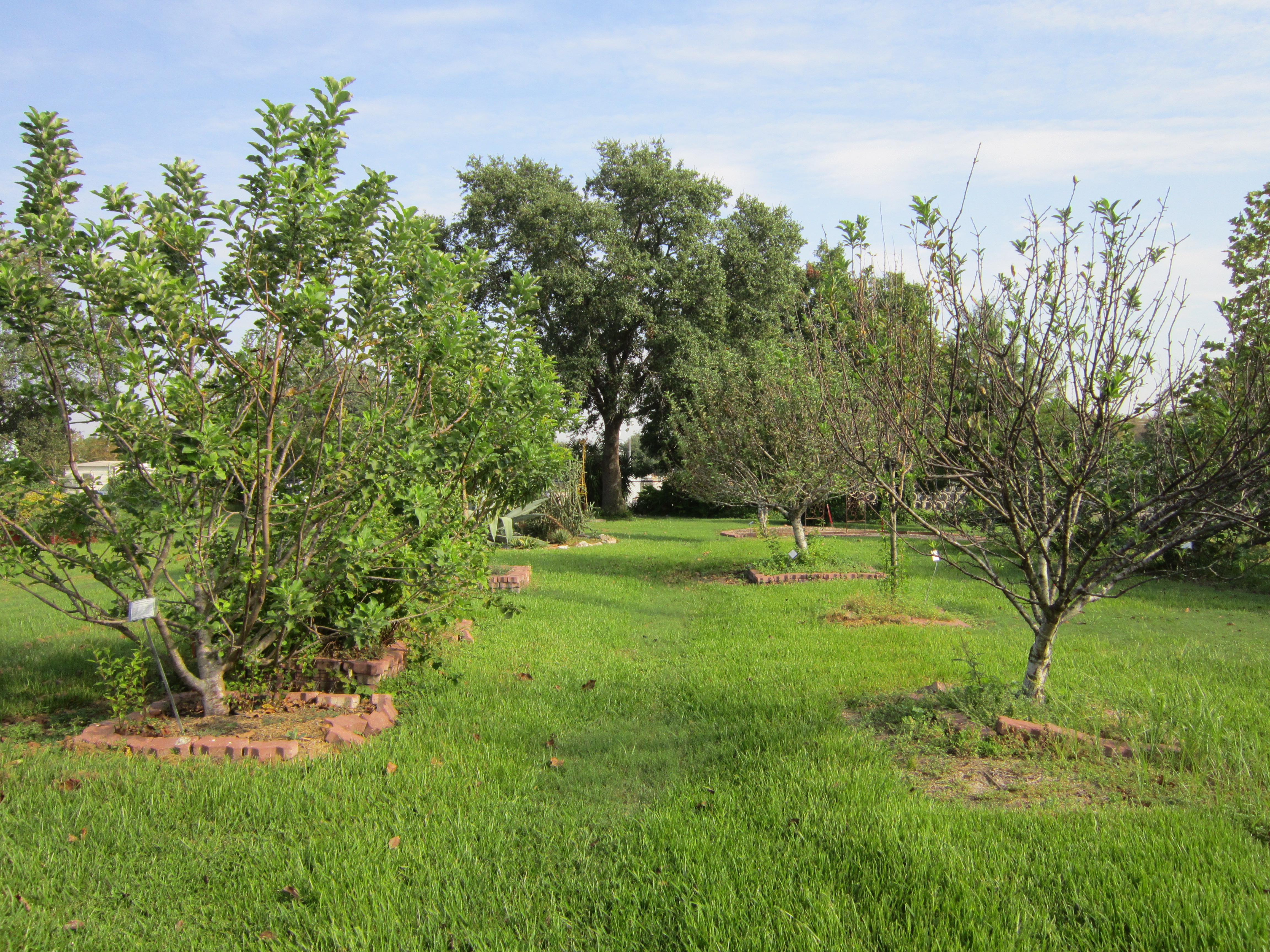 This was a cute little display: 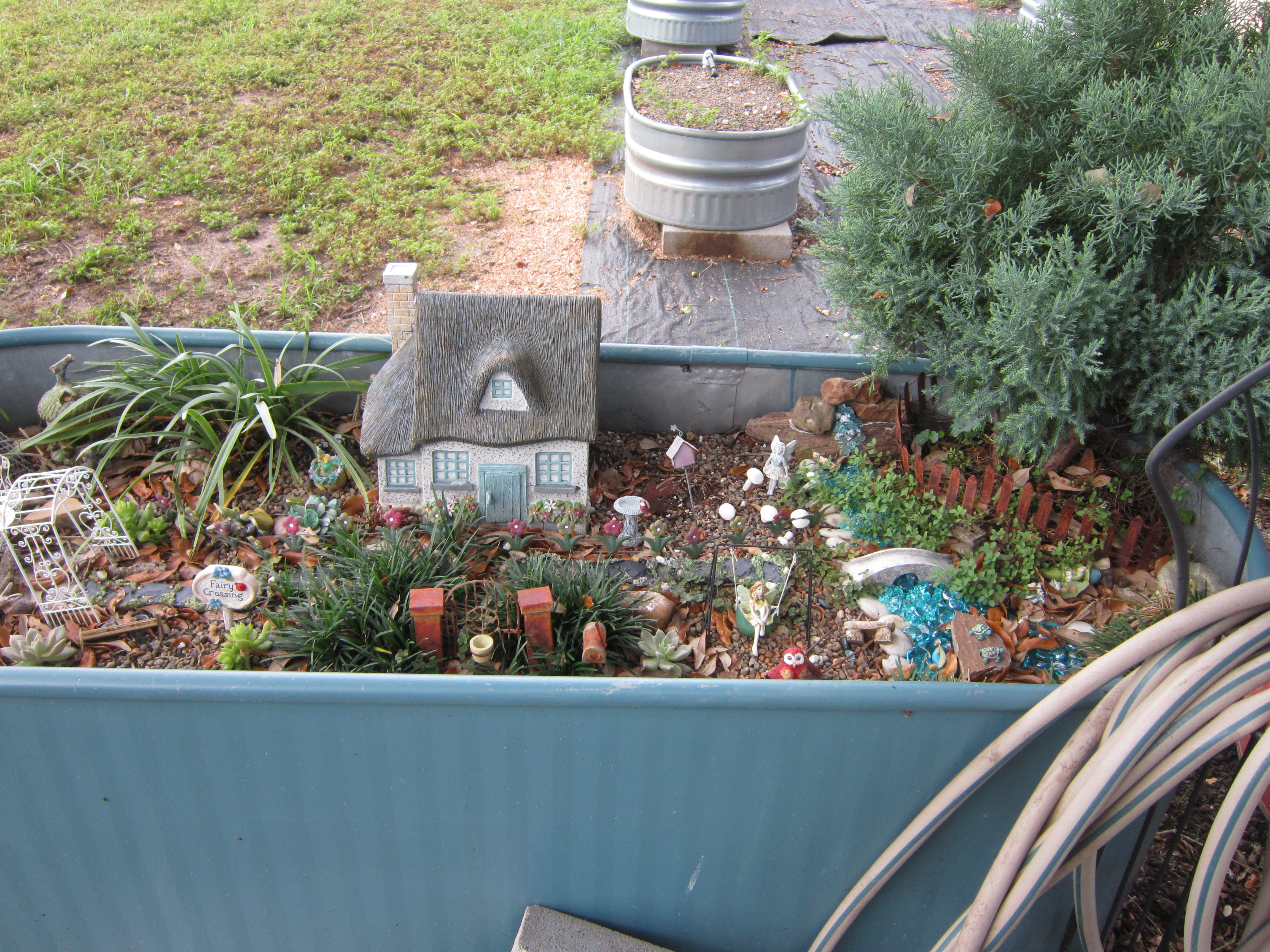 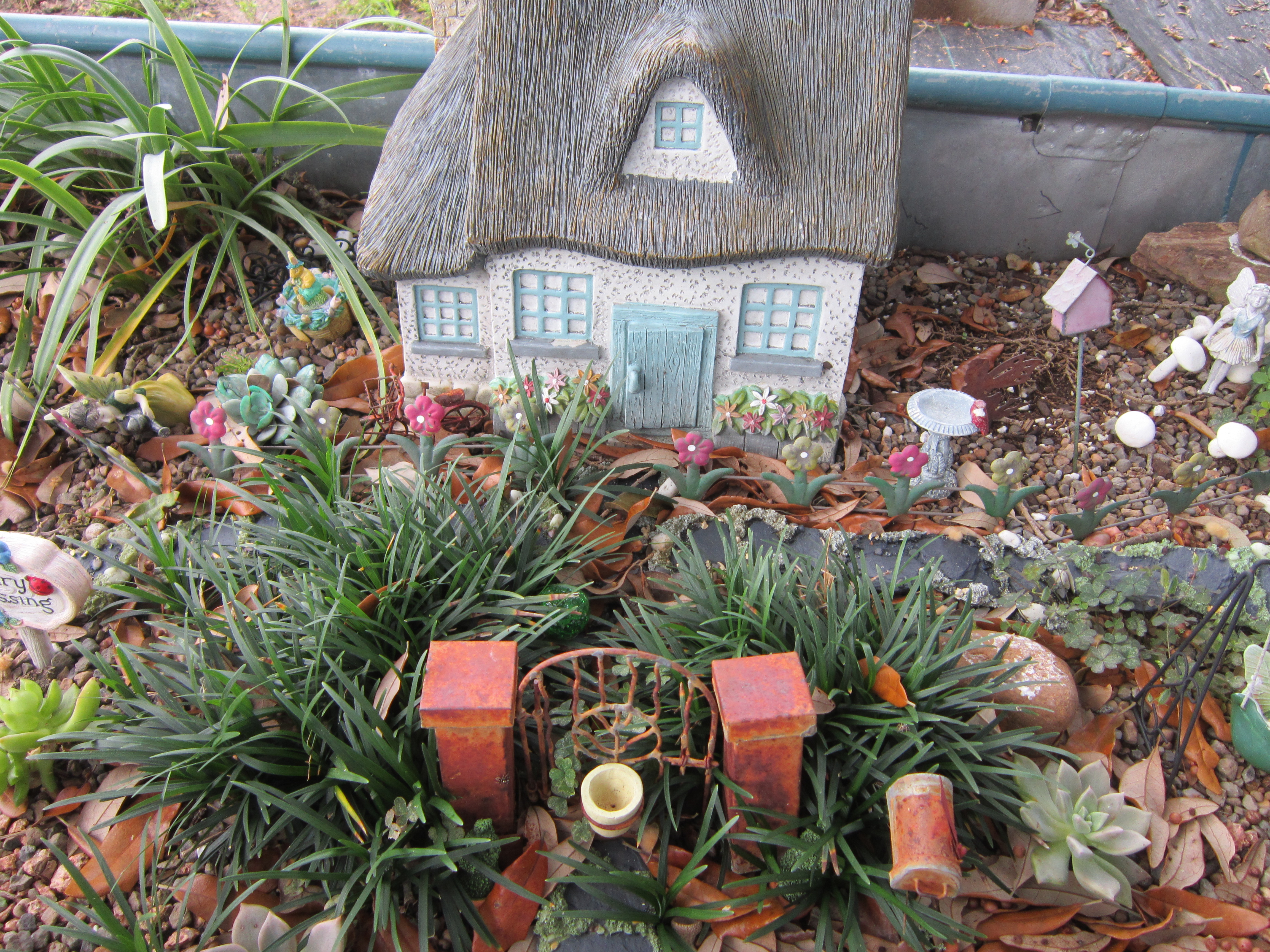 If you like eggplant, they’ve got a garden variety that, it is claimed, actually tastes good. 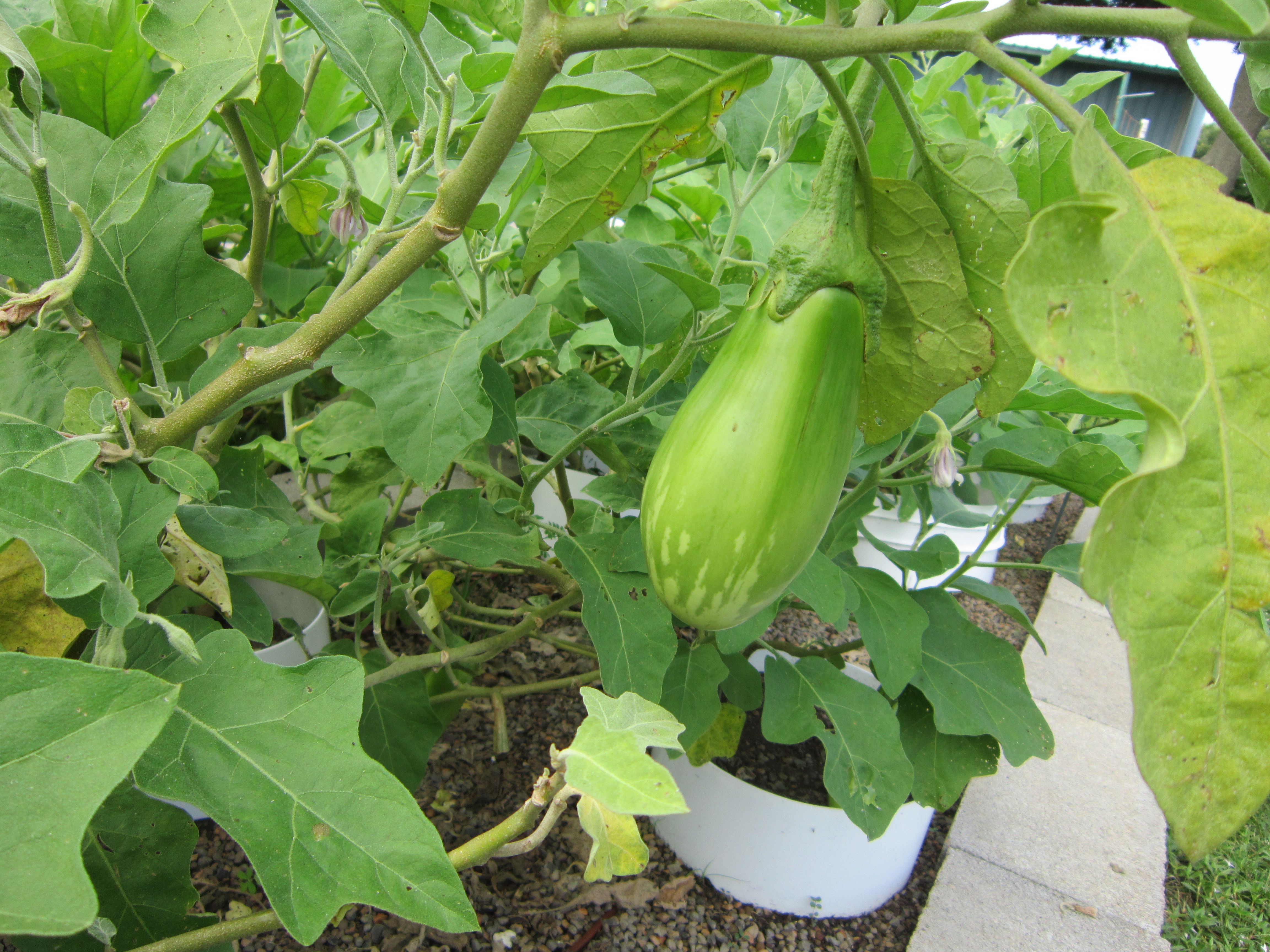 These eggplants stay green, and do not turn purple.

Here’s another look at that eggplant: 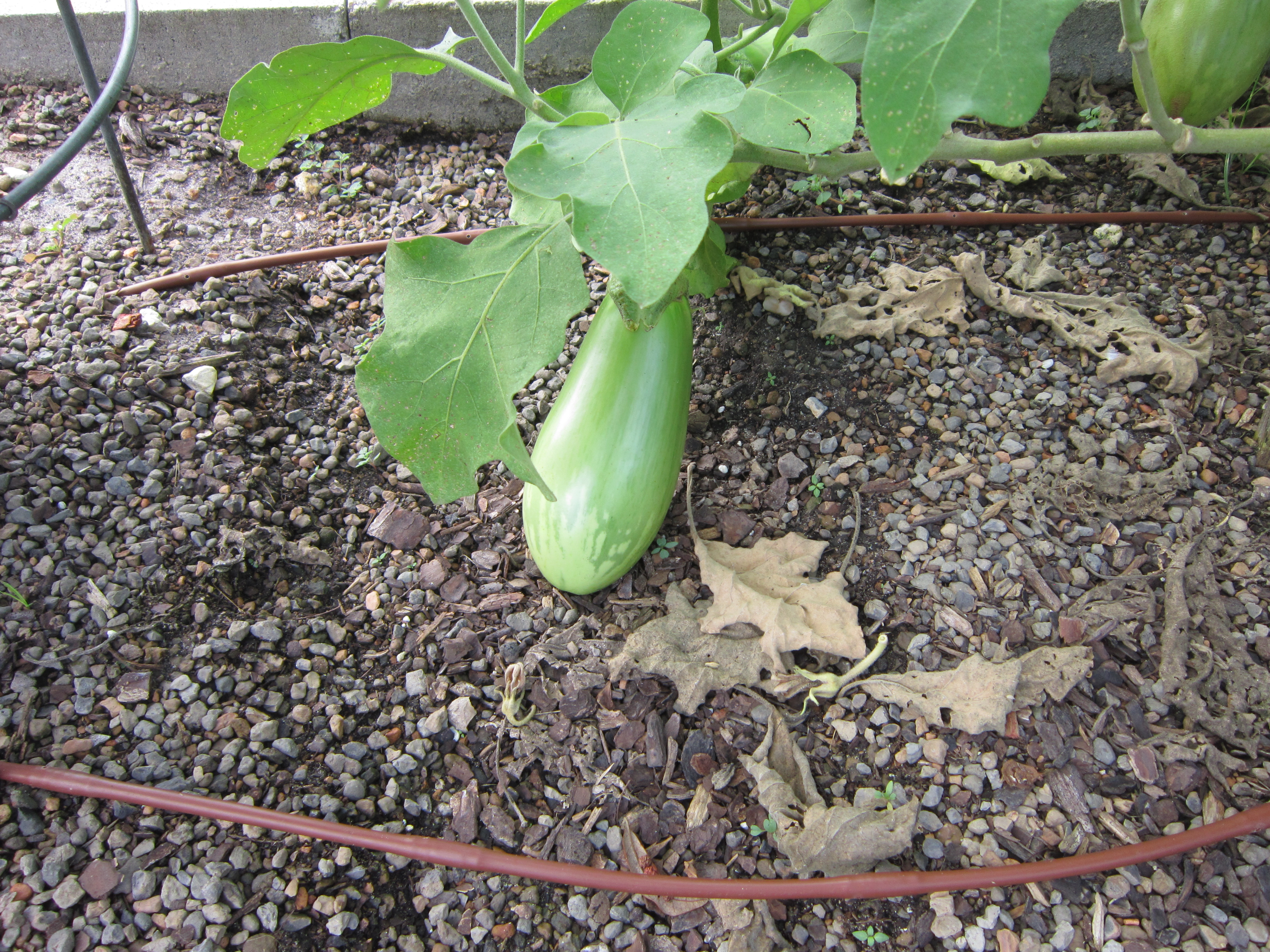 There are peppers of many kinds: 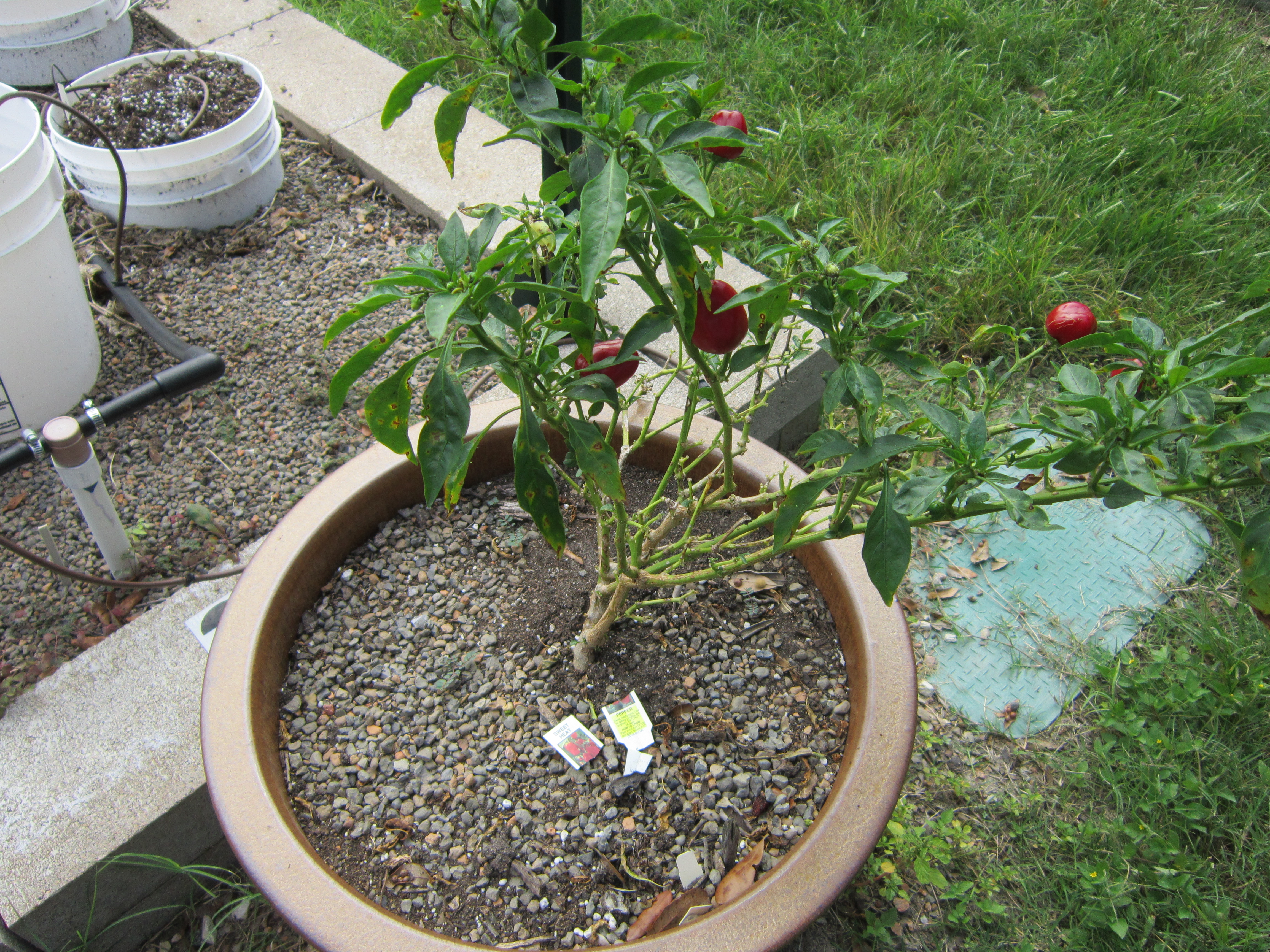 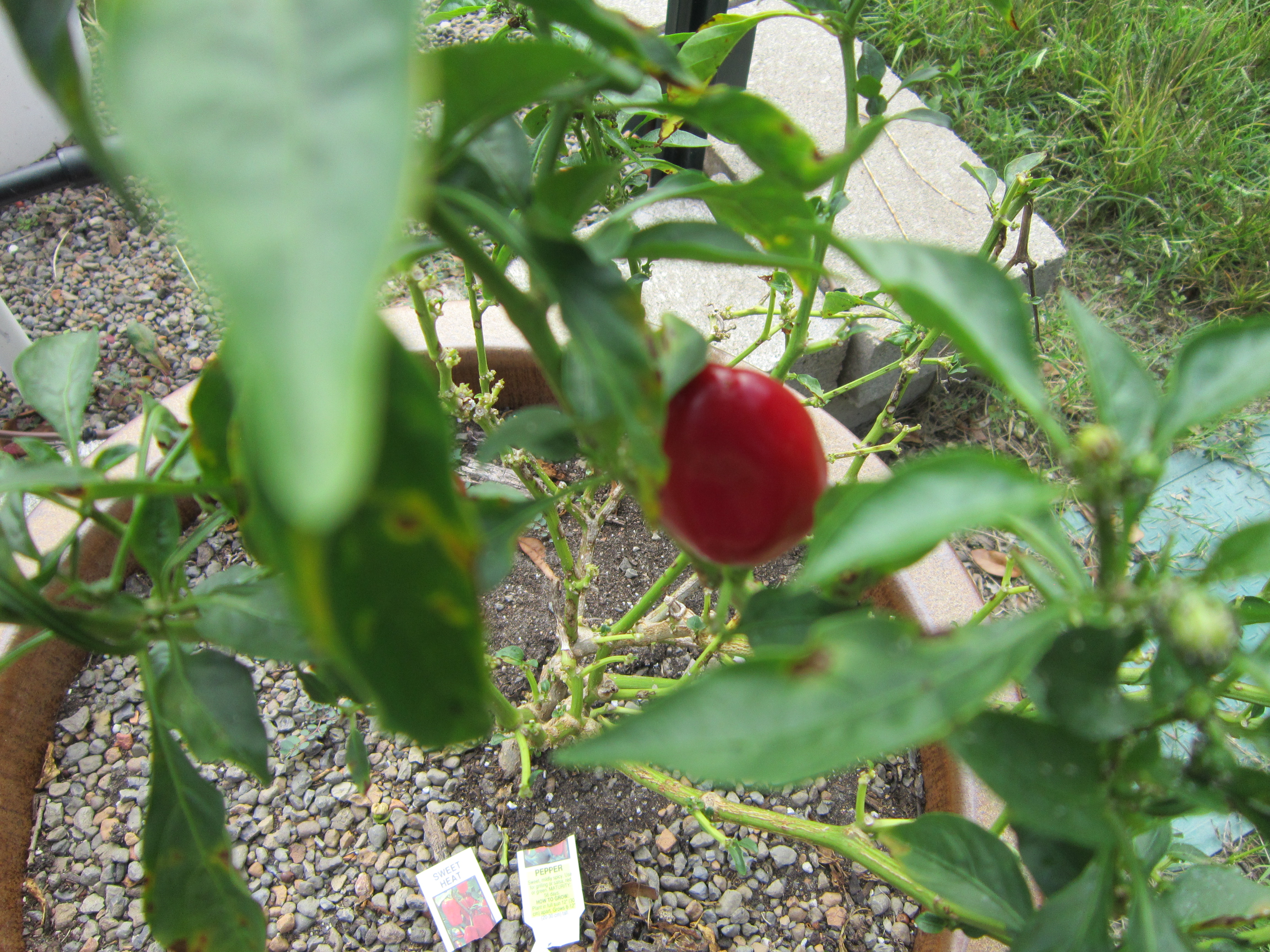 A closer look at the sweet peppers 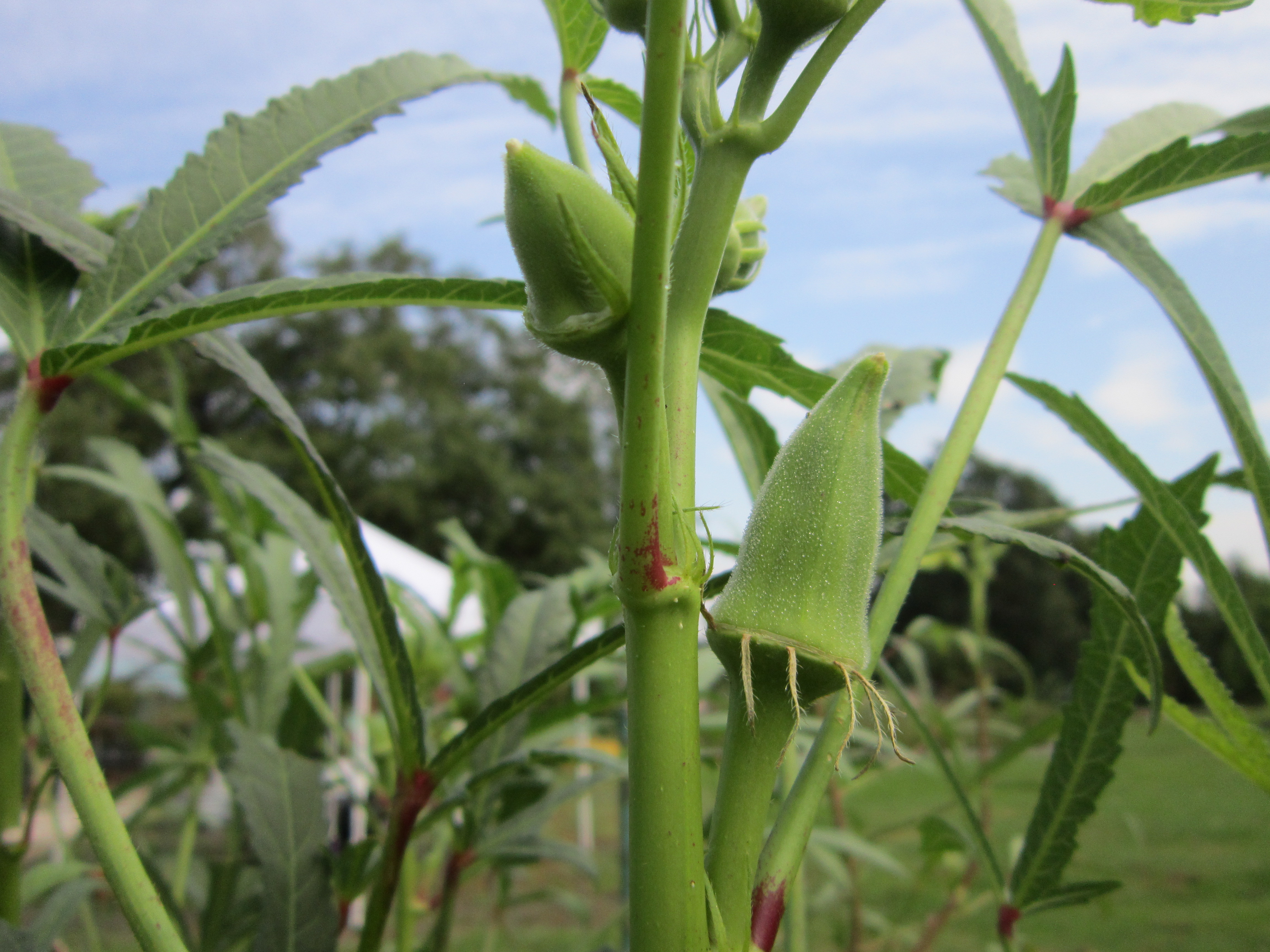 They grow green onions, just like I do, only more of them. I also got answers to questions about the garlic that never seems to grow well in my garden. One nice lady said it was probably critters. I’ll try again soon. 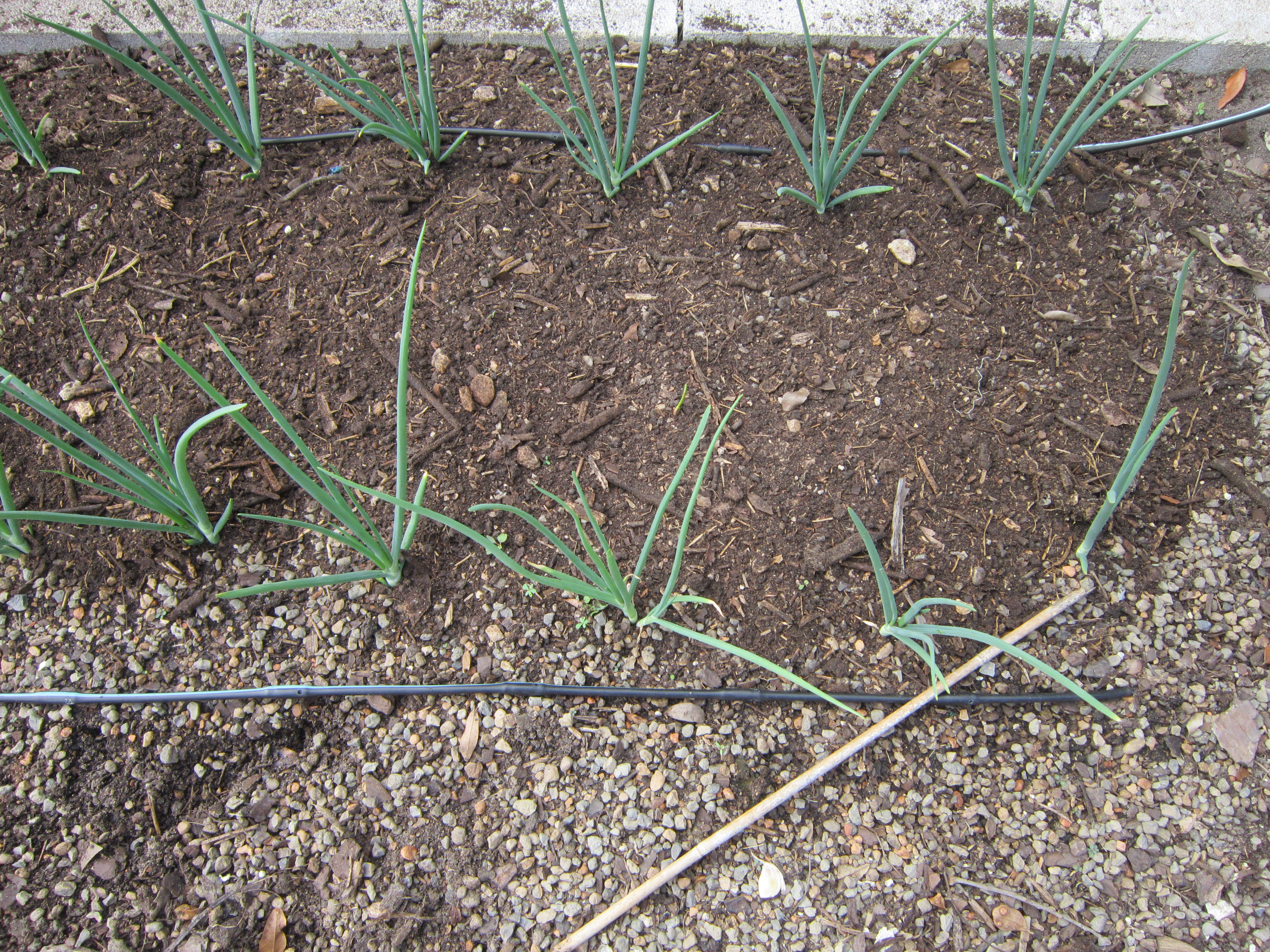 A few shots from around the garden area: 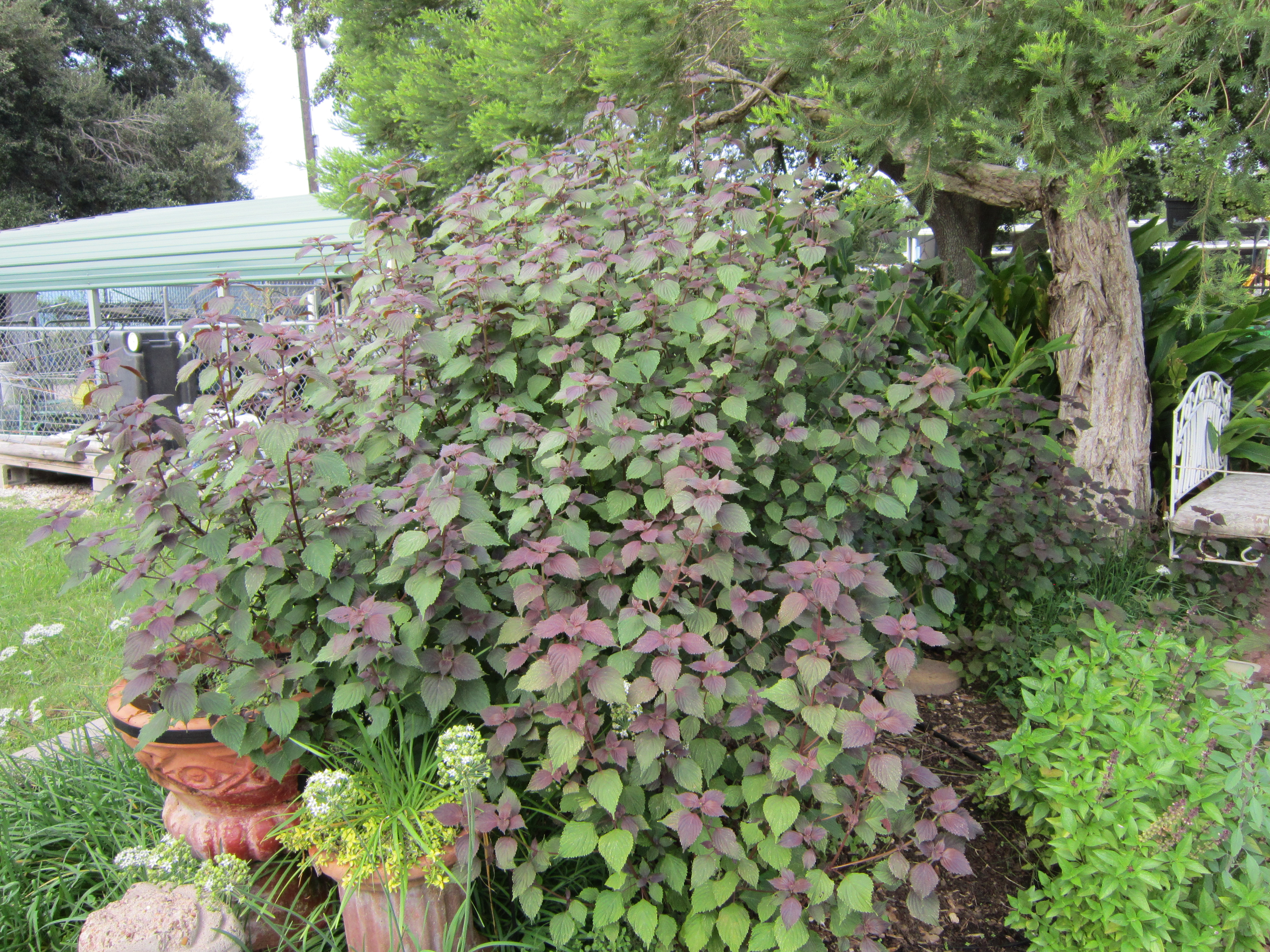 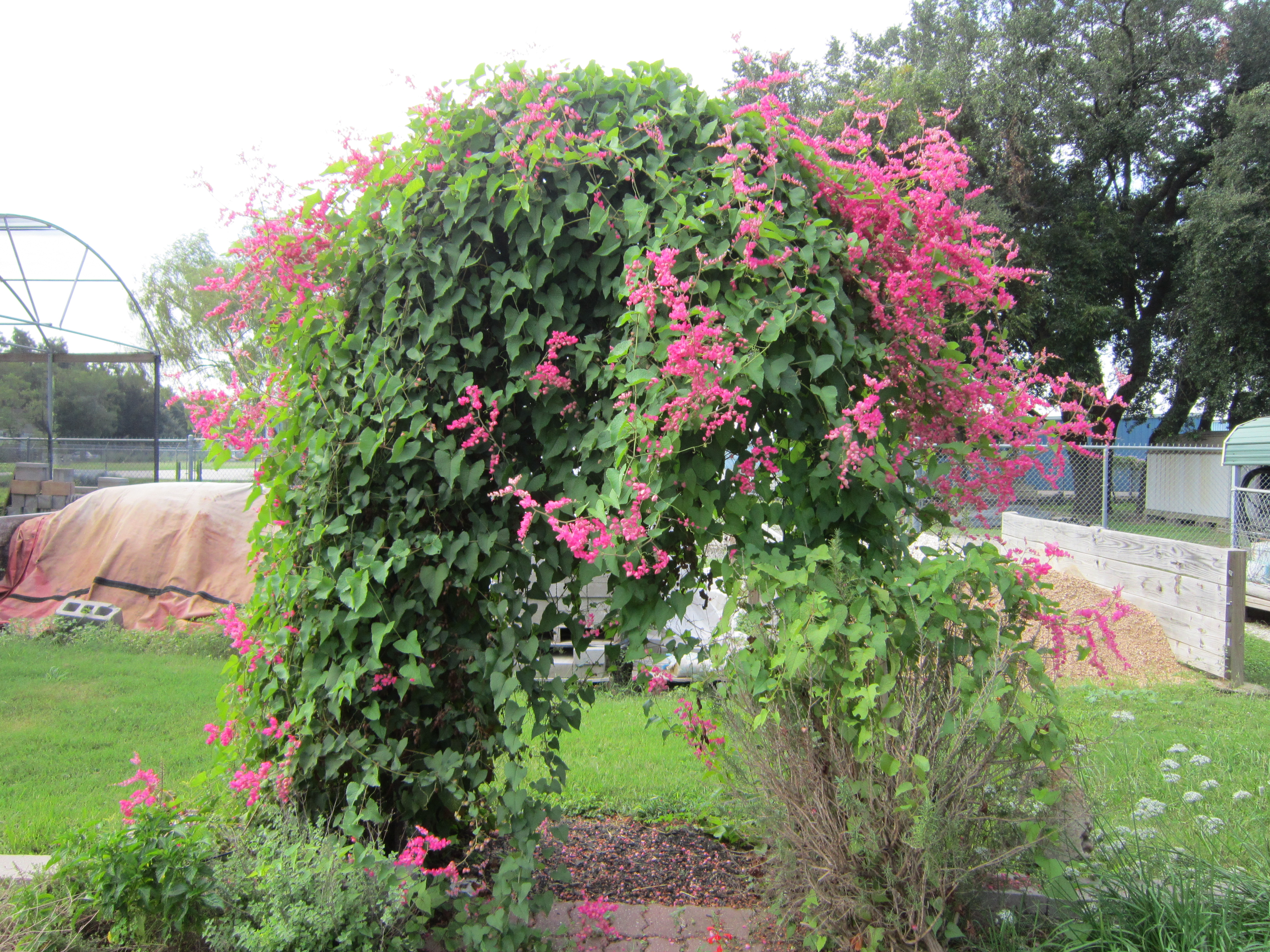 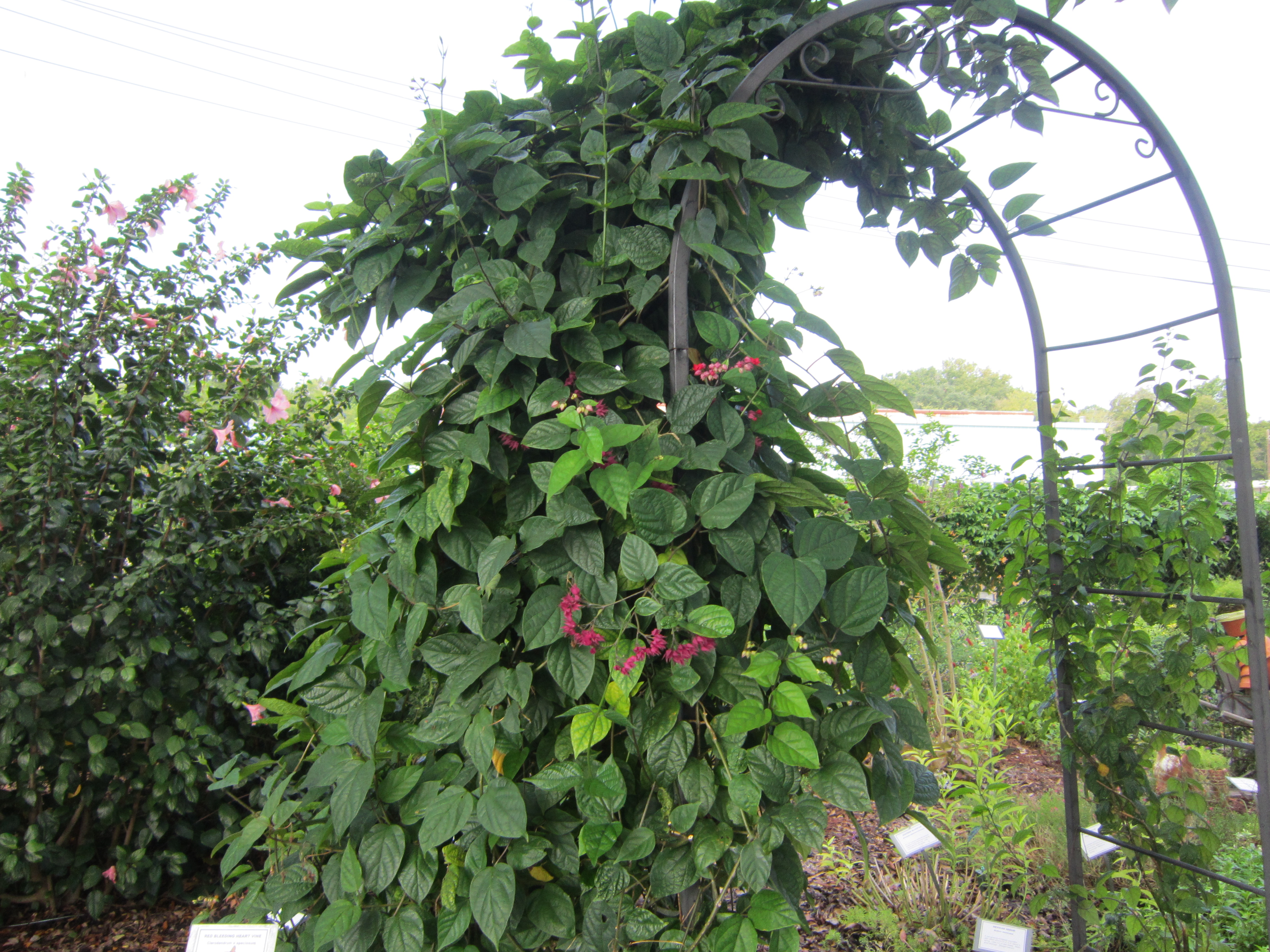 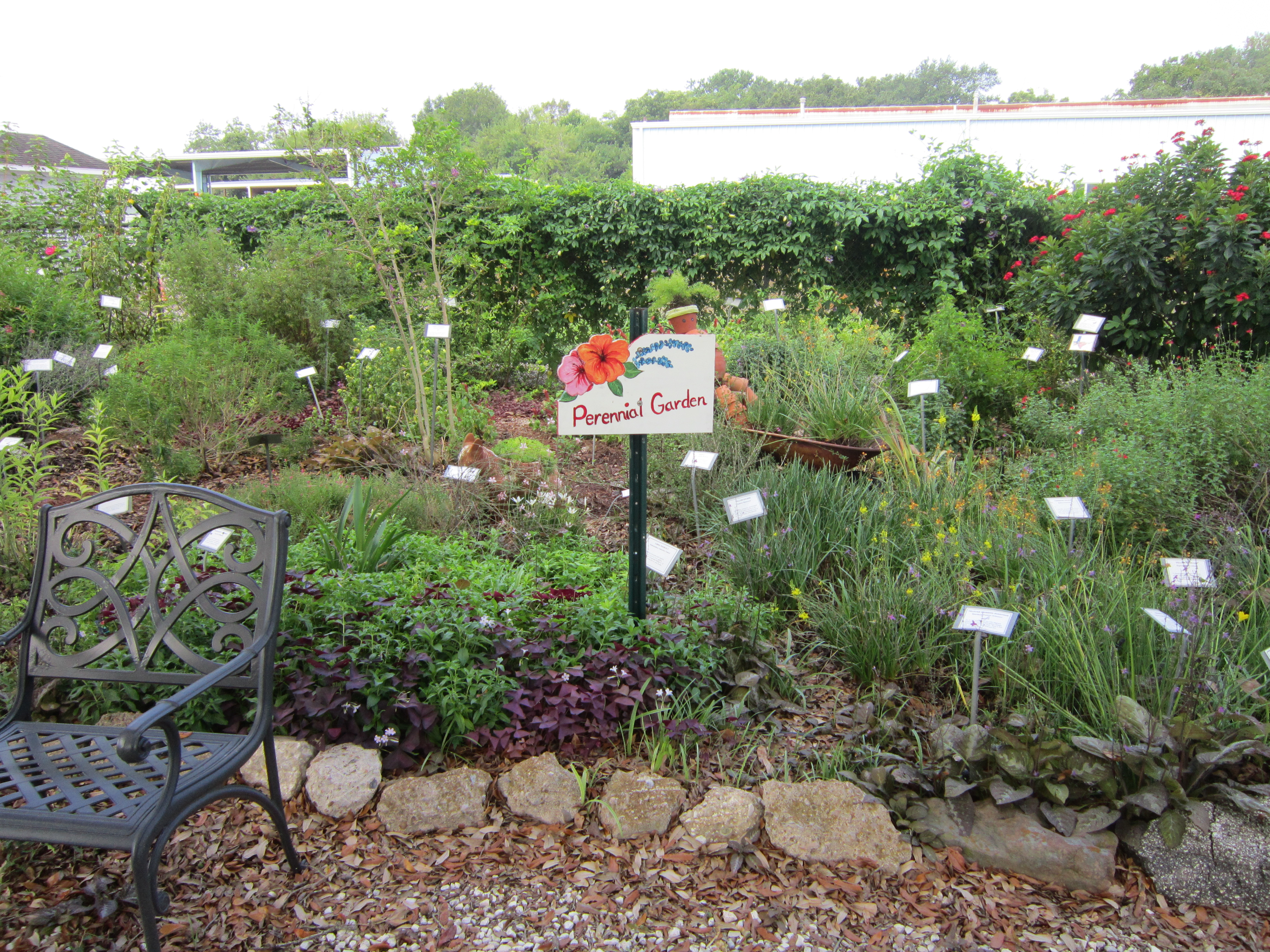 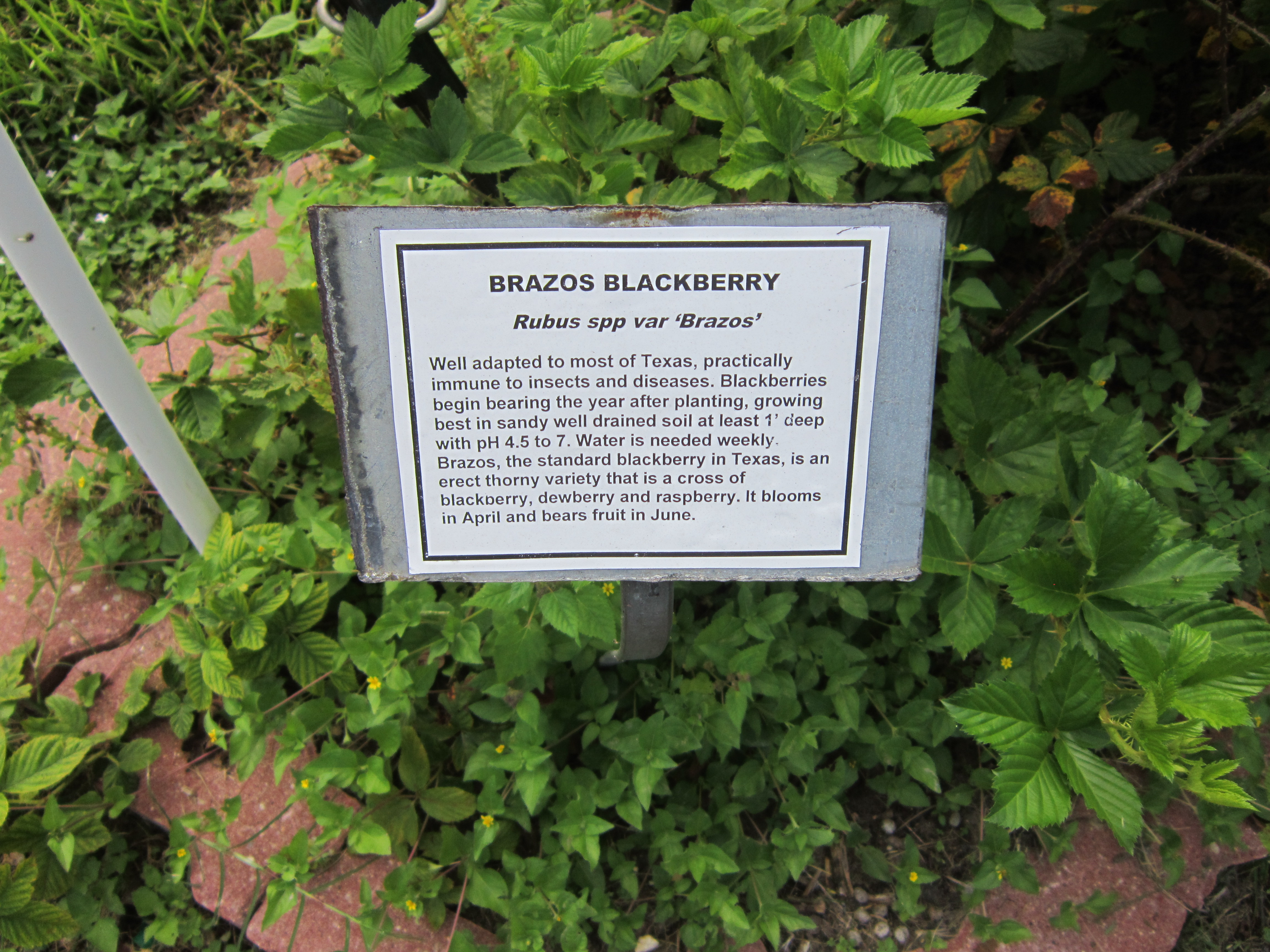 I think these are grapes, but I couldn’t find a label for it: 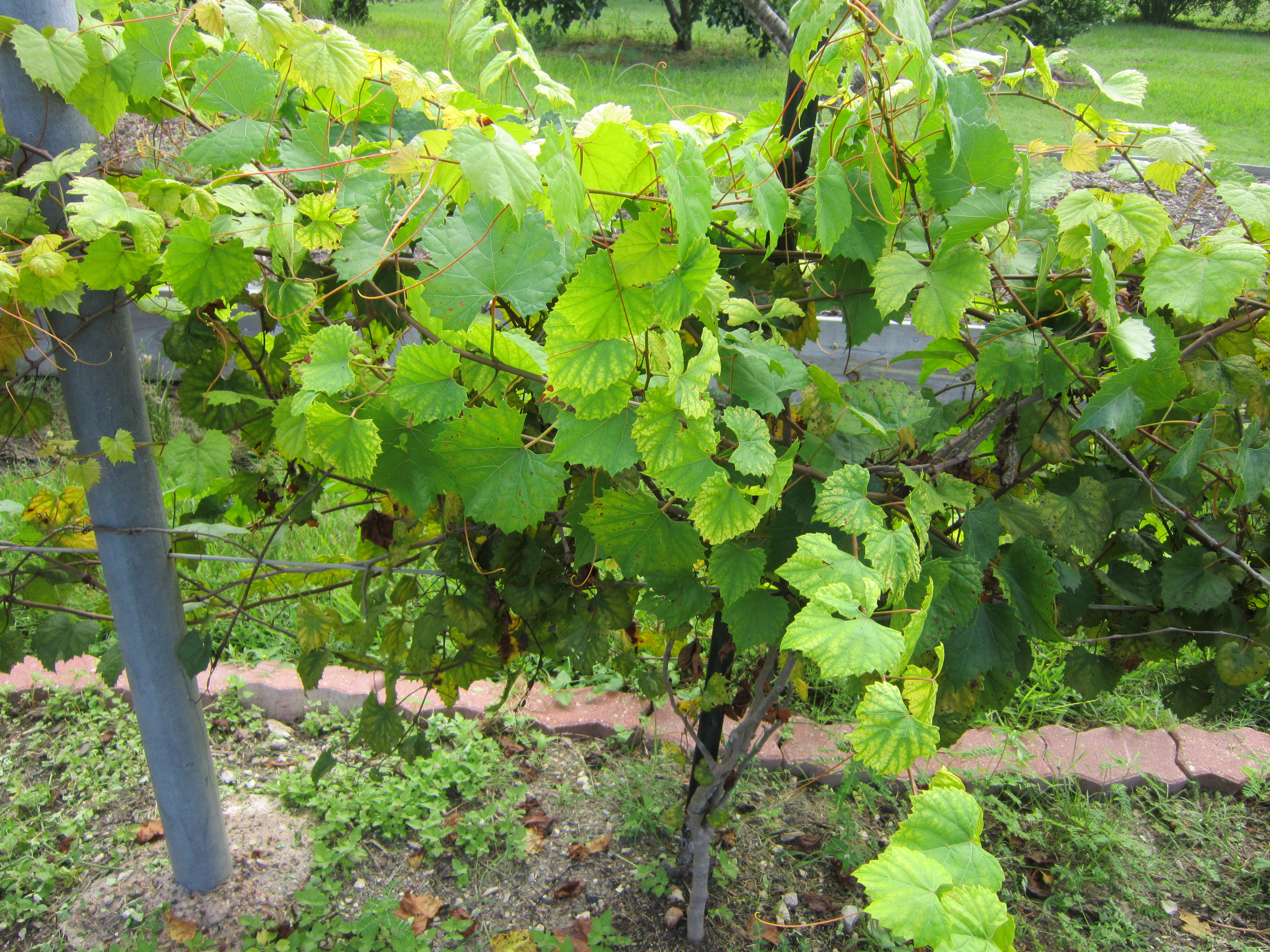 And they didn’t forget the kitties, either! (I bet there’s a huge feral cat colony living there, somewhere, that comes out to party in the Garden at night.) 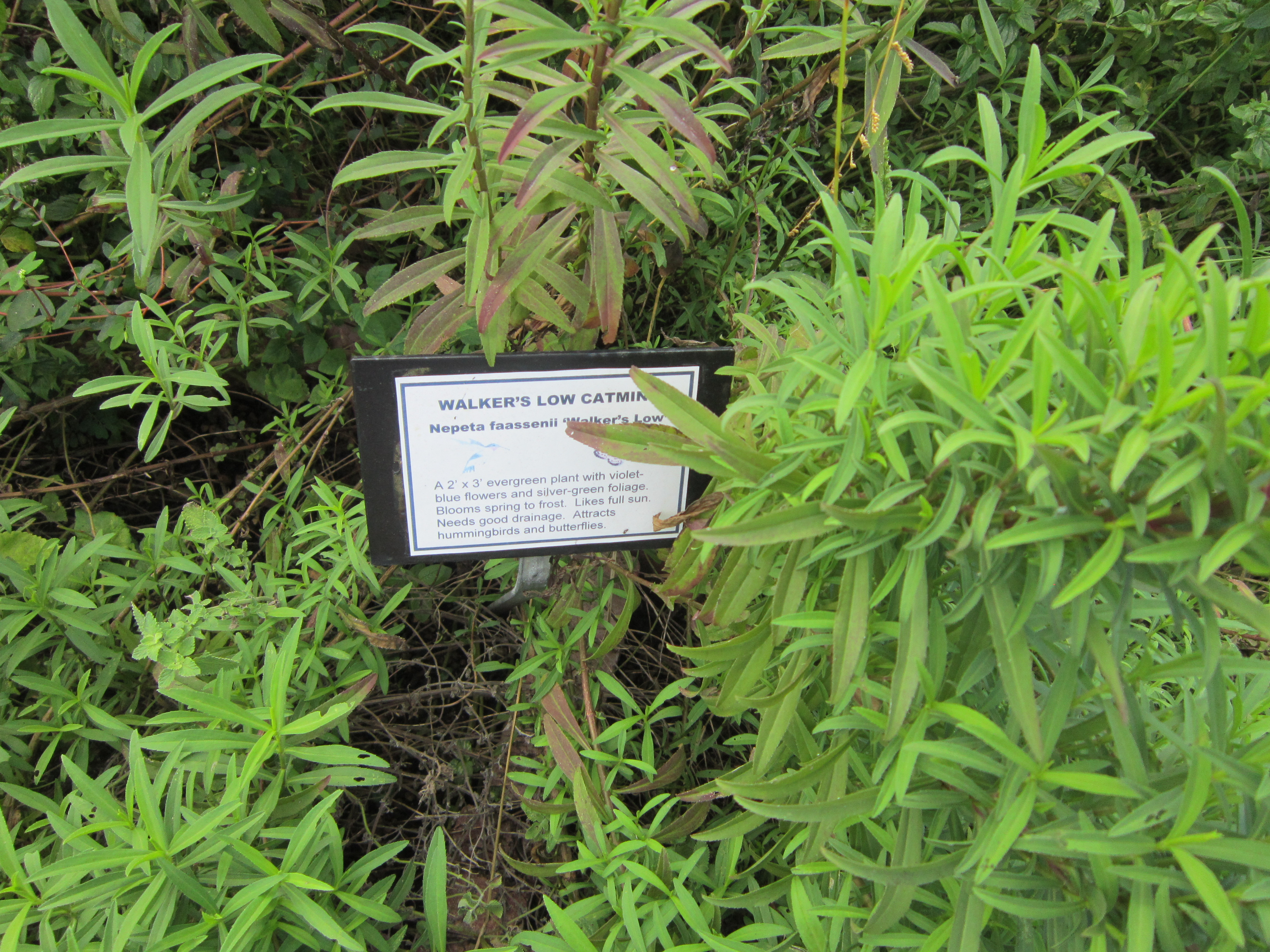 I was quite surprised to see an area of desert plants, separated from the rest of the garden: 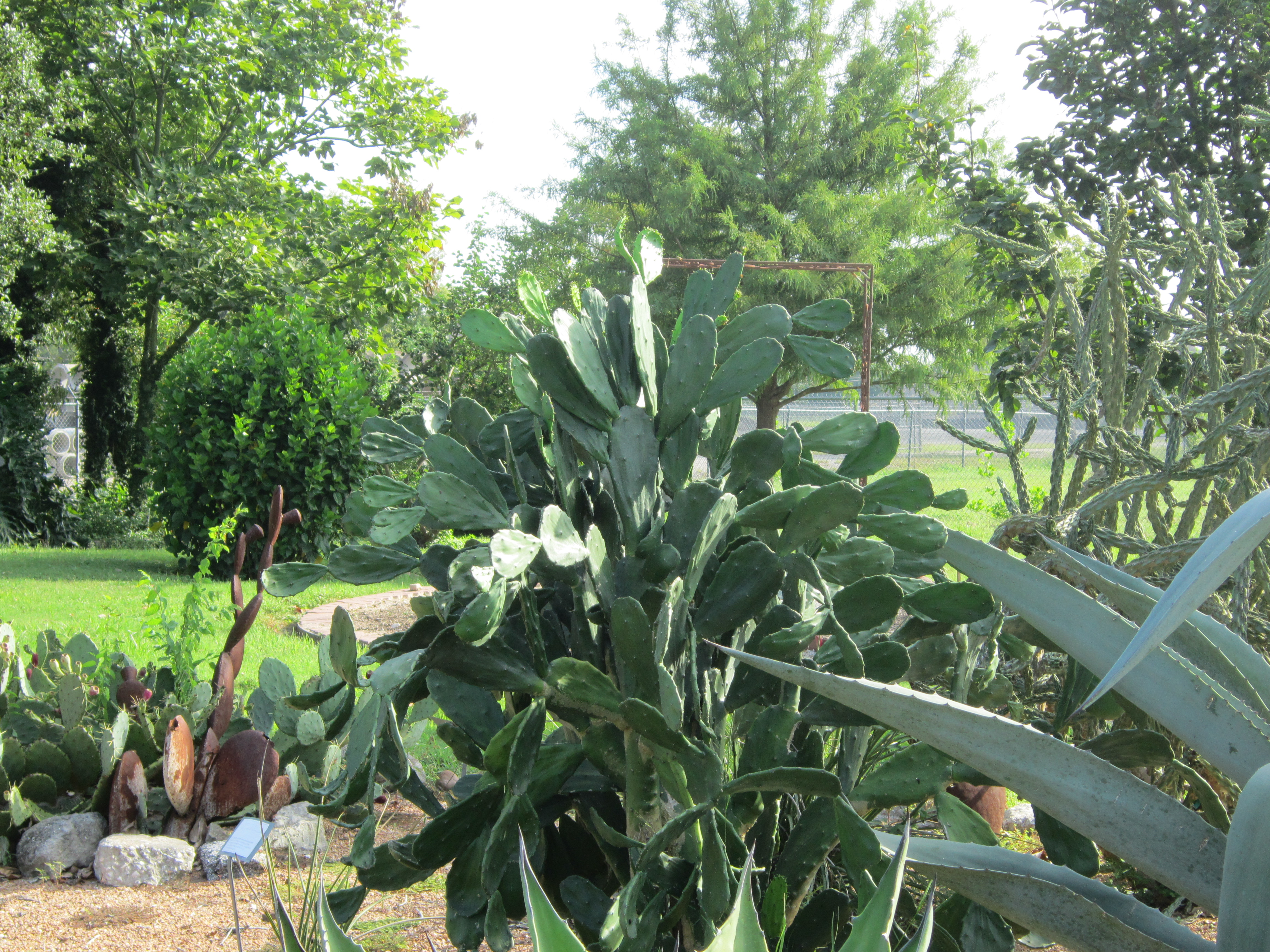 That’s the biggest Prickly Pear cactus I’ve seen since I left California. In 1988. 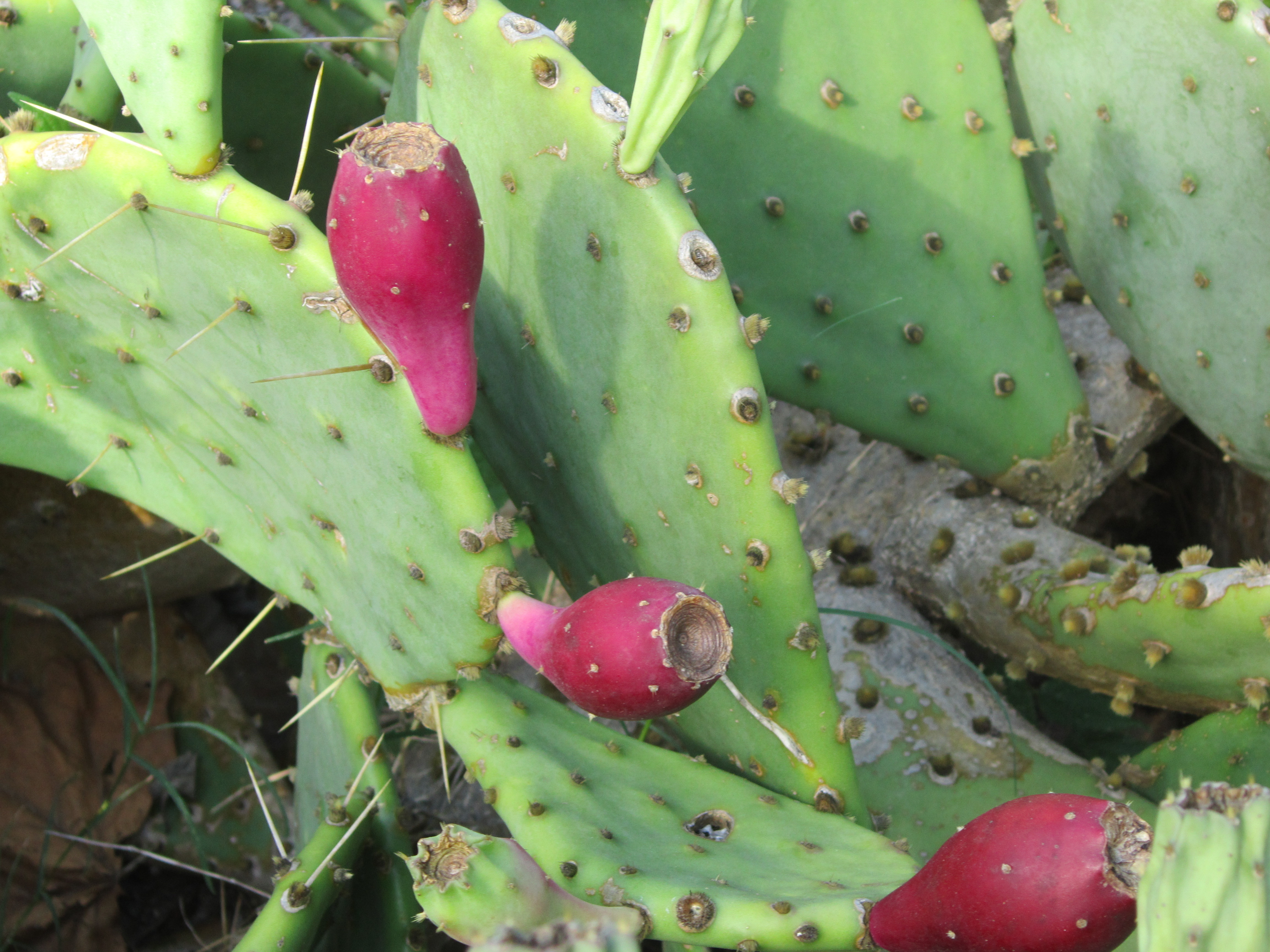 Yellow flowers develop on top of the little fruit buds, that’s why there is an indentation. Then the flower dries up and falls off (just like zucchini or peppers) and the fruit buds start growing. When they turn dark purple, you can pick them and peel them, because they’re sweet. I’ve seen “Indian Candy” at truck stops in California and Arizona. (But not in a long, long time.)There were other desert plants, as well, like this, I believe is called an Ocotillo: 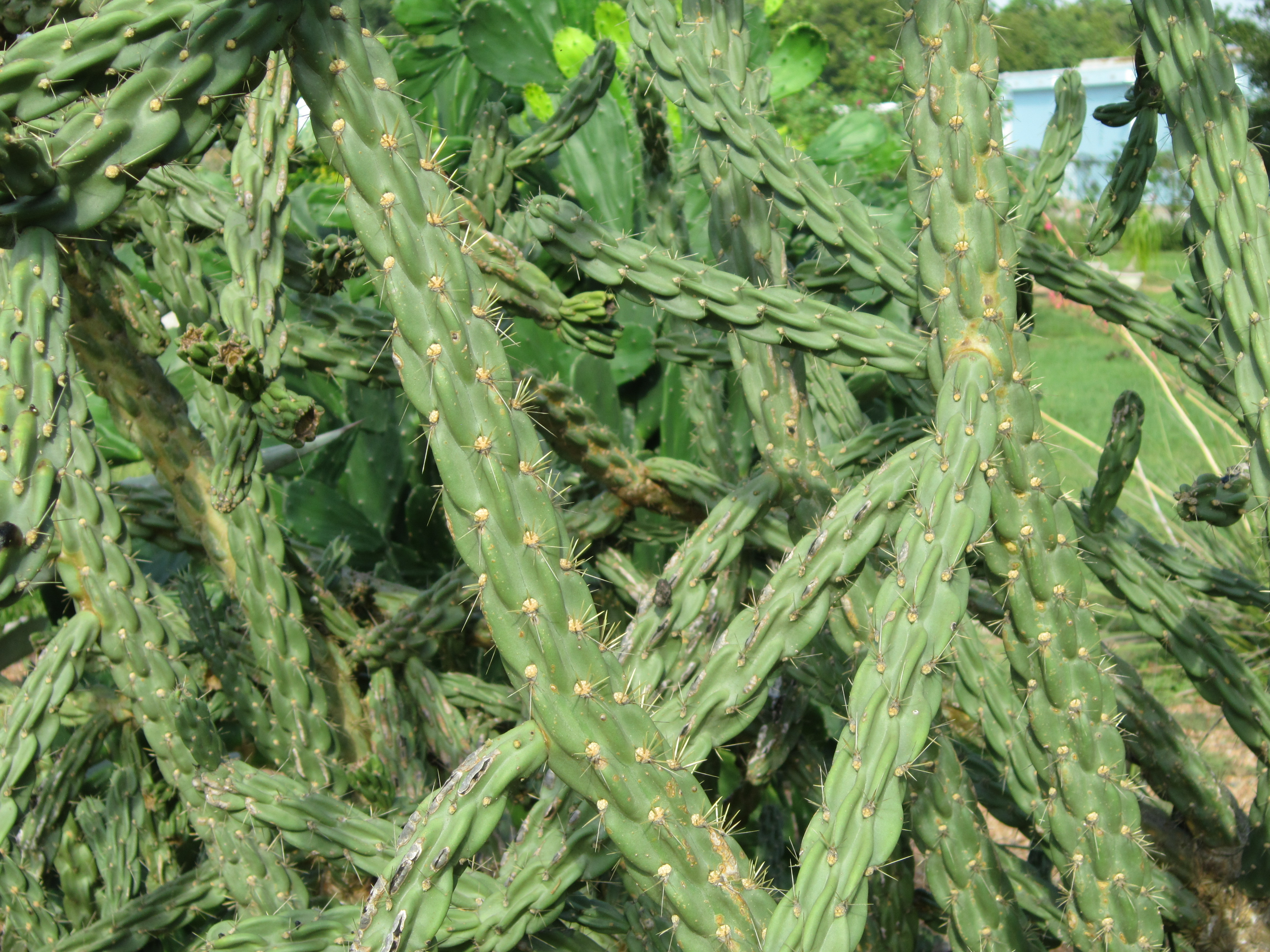 Yes, those needles are indeed SHARP.

NOW–remember what I said about more pesto? Get a look at this: 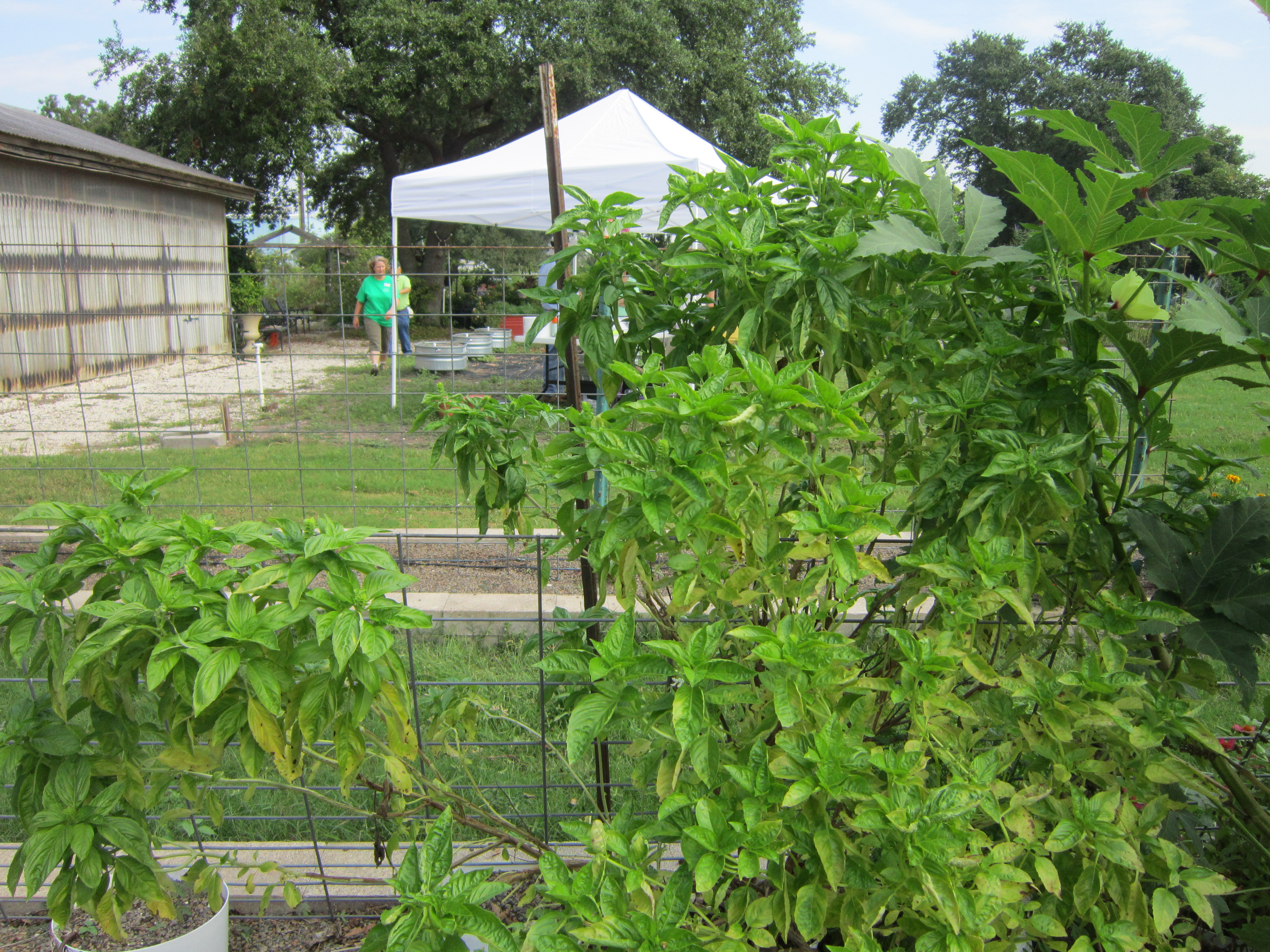 I mentioned to one of my “tour guides” that I grow basil for the sole purpose of making pesto and freezing it for the winter. I told him about Pea & Pesto Soup, and told him that if he made that for his wife, she would be very happy with him. He reached down and cut me a couple of huge branches, big as a wedding bouquet. (Don’t read anything into that.) I stopped on the way home at Randall’s because I knew I didn’t have enough pine nuts to make two or three batches. I might start using walnuts one day–I like walnuts too, and they’re less expensive than pine nuts. 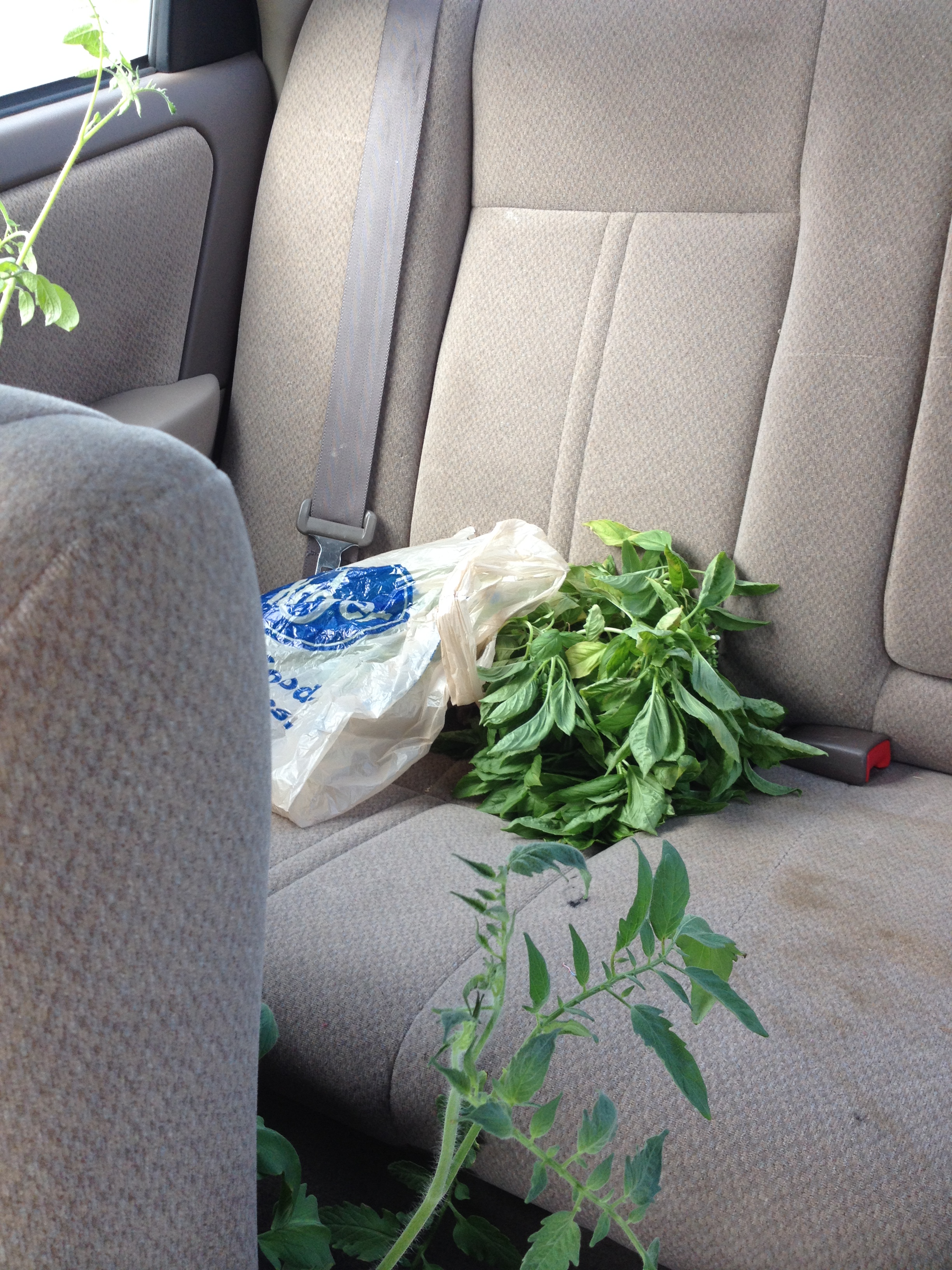 He GAVE me that basil. It was HUGE!! (Tomato plants in the foreground.)

Another one of my tour guides (listening to my discussion of said soup) asked me, “how do you have time to do all that cooking?” I smiled and said, “I’m single.” He was delighted to hear about Pea & Pesto Soup, but insisted that I make some and bring it to him to try. I’d guess he was in his mid-70’s, and he was not about to go online to find the recipe. (Most of the people working there were women.)

There are several varieties of basil growing, like this one: 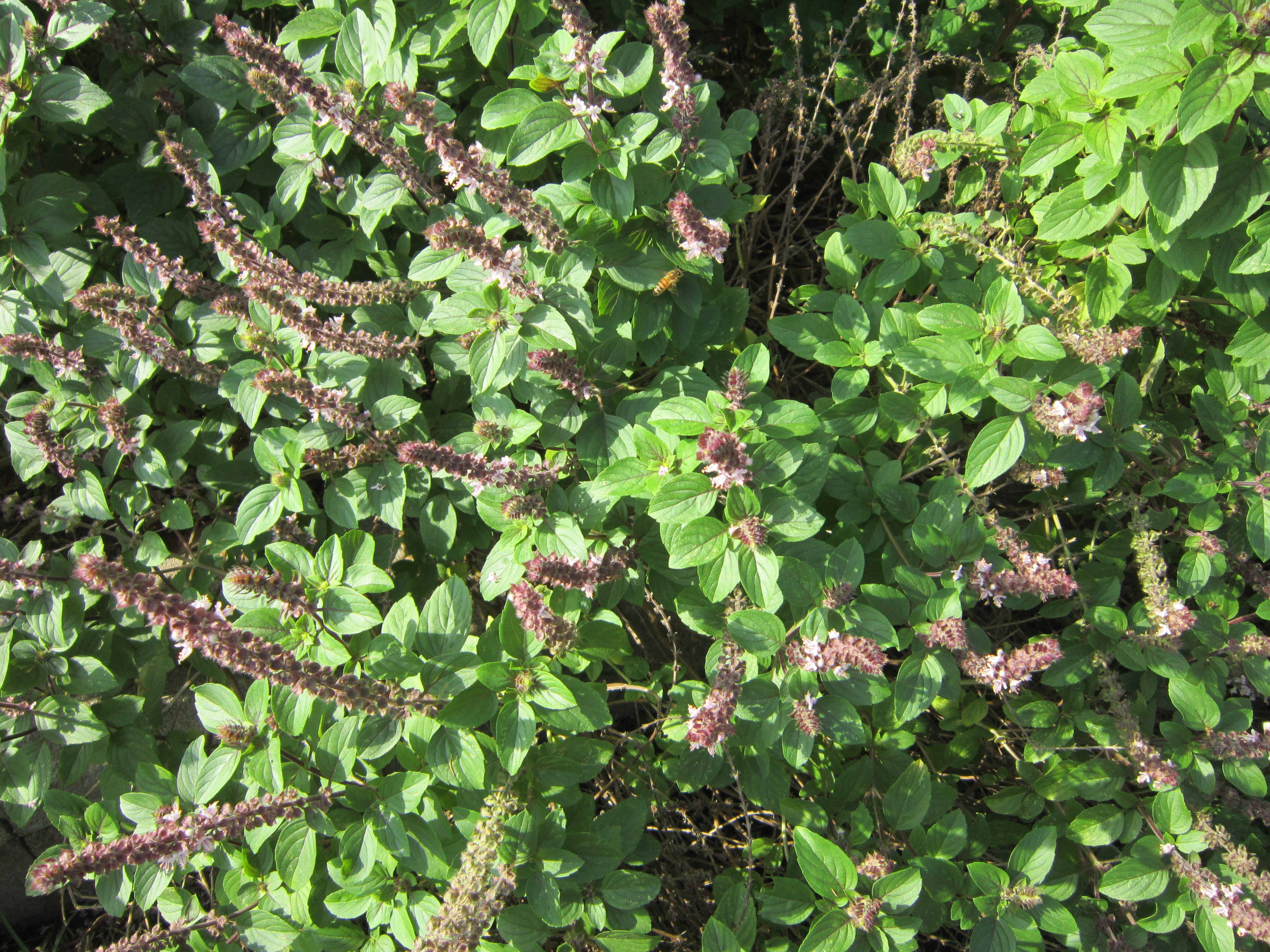 As I’ve done so many times, I picked a leaf and tasted it. Suddenly behind me, I heard a woman’s voice say, “That’s not culinary basil.”

It wasn’t poisonous, but I did indeed spit it out quickly and ask about it. She said, “I’ve never had anyone pop a leaf in their mouth like that.”

I got to ask lots of questions, and I found out a lot of things I didn’t get from the lectures. First, I’m under-watering my plants. DUH! Second, there isn’t enough room for all the water to drain properly, so I have to get a bigger drill bit soon and drill bigger holes in the bottom of the paint buckets. If I have time next month, I might go take a ride, now that I know where it is and how easy it is to get to from here.

I went into the greenhouse to get some plants, and there were some free seeds, limit 5. That was all I needed. 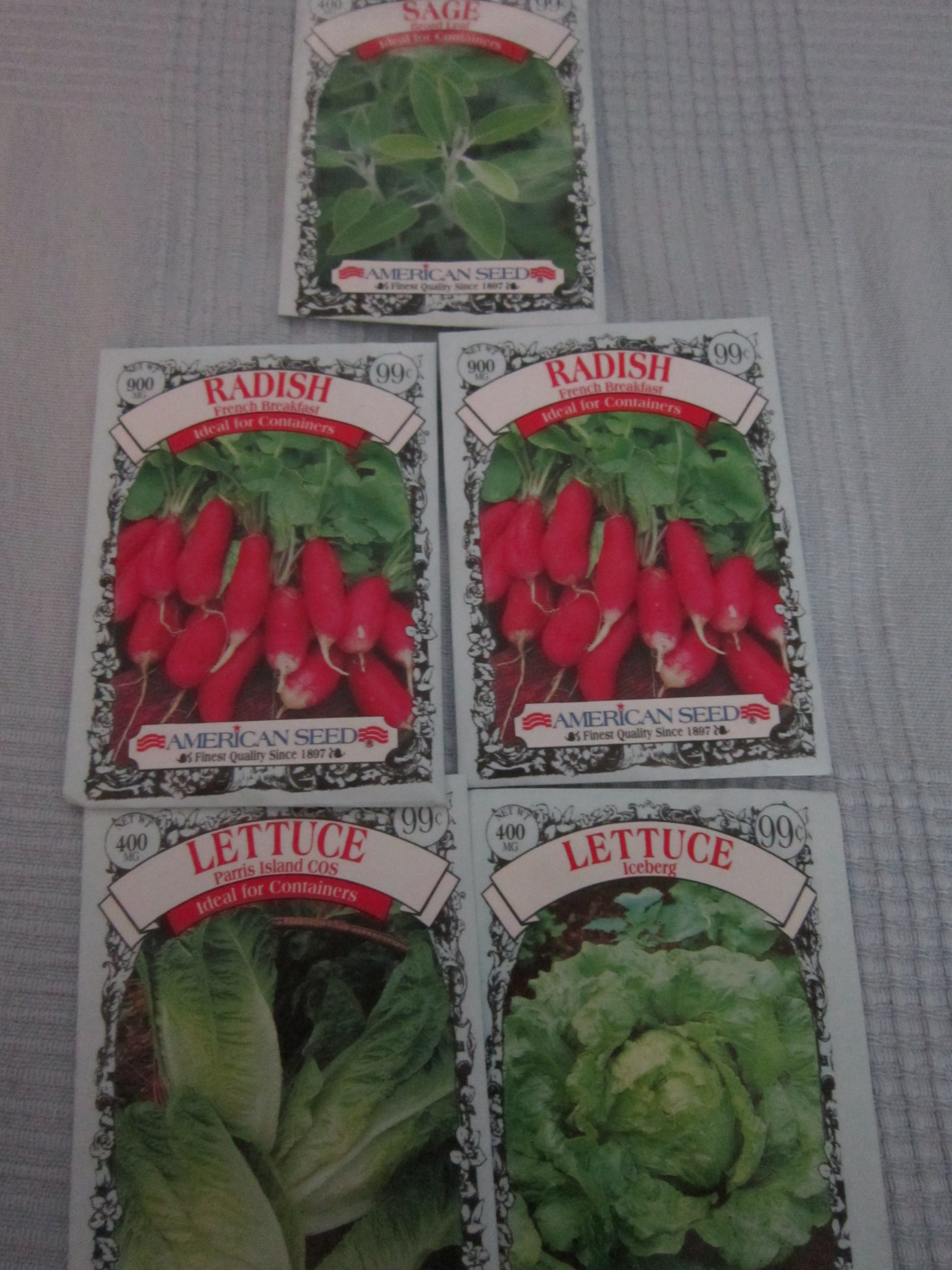 Lettuce will be happening again, soon, too, thanks to the seeds and the cooler weather that’s coming.

It’s not a big greenhouse, but there were plenty of plants for sale. I missed the kale, though. Sorry, K. 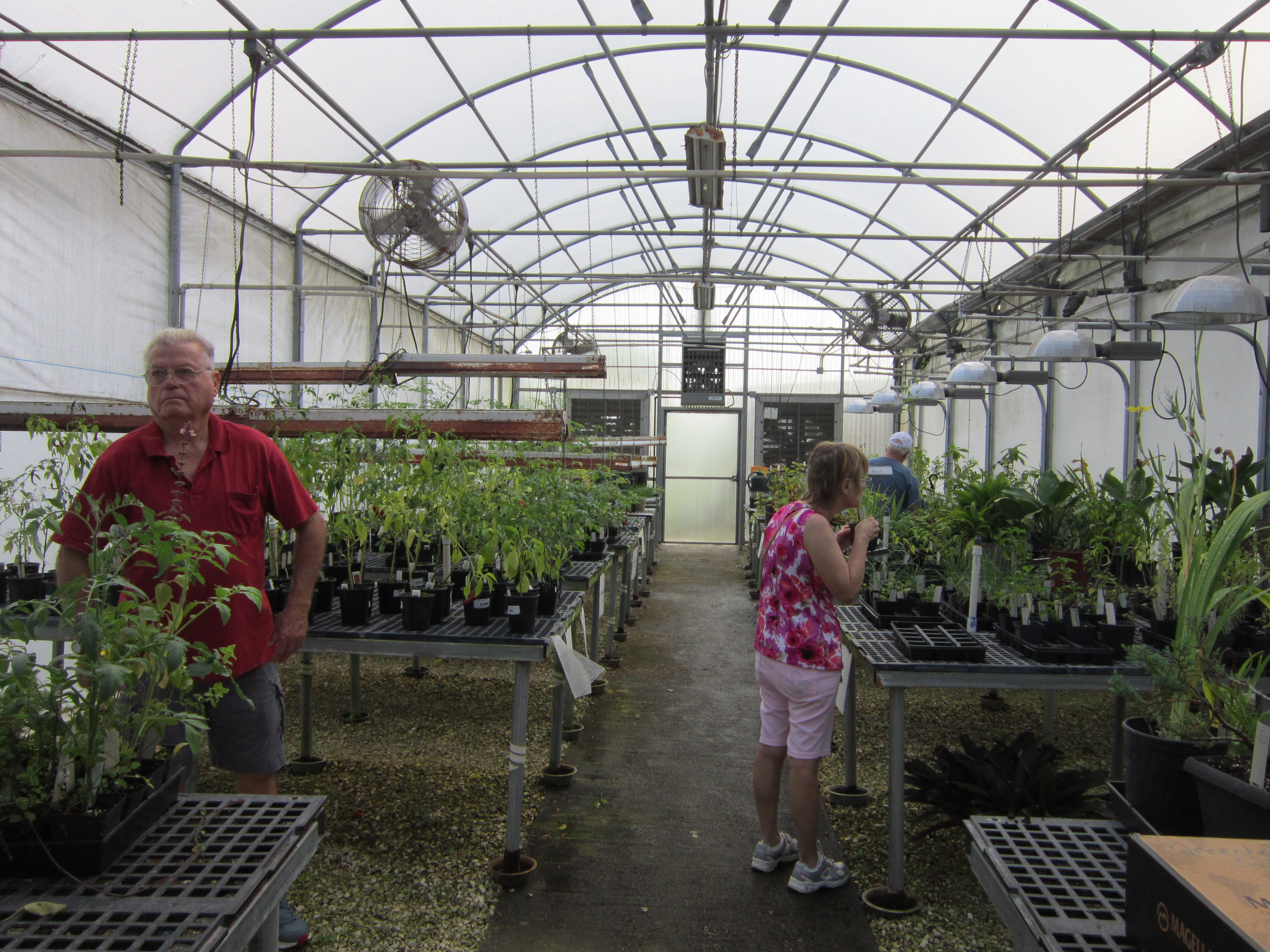 Nice and cozy for the plants.

Now, to give you some perspective on why gardening can be a good thing, consider the Meyer lemons that I’m hoping will get bigger. I’ve got seeds from last year’s lemons, and I may need to prune the tree a bit. But on a recent trip to The Fresh Market, I found some Meyer lemons: 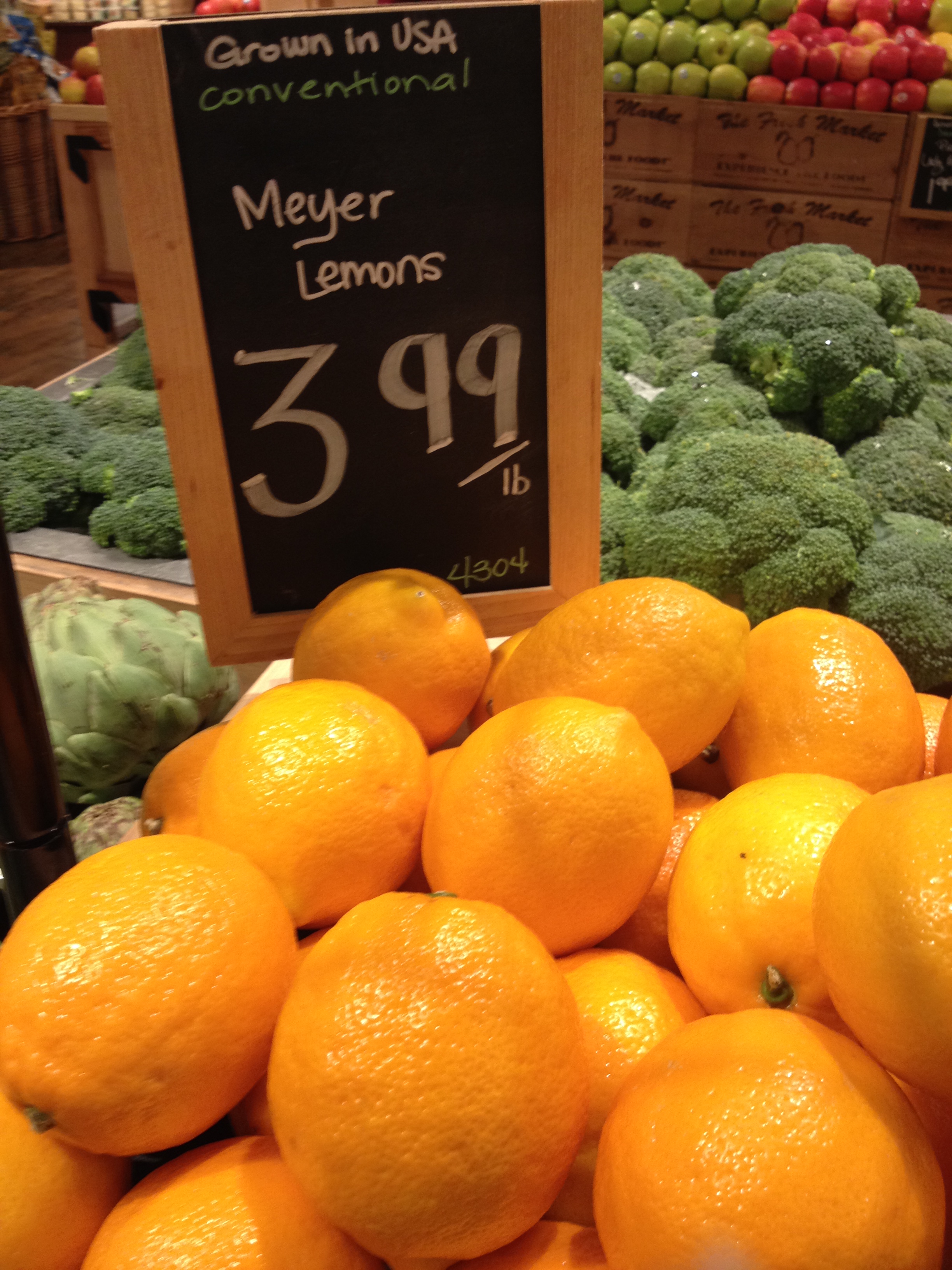 I hope to grow more and more.

I sent that picture to Neighbor K. She was quite surprised to see how much they were. NOW do you see why I want to grow them? I do hope mine grow full size before they completely ripen.

You can find out more about the Genoa Friendship Garden at this link. The Garden is open to the public on the third Monday of the month from 8:30 to 11:00 am, and they sell plants cheap. If you’re looking for something to do in Houston, there are two gardens; this one is on my side of town.

Time for fall gardening, and I’ll be hoping that radishes finally grow back there. They grow quickly, and best in the cold winter. Fingers crossed, and I’ll tell you all about it. . .if it works.