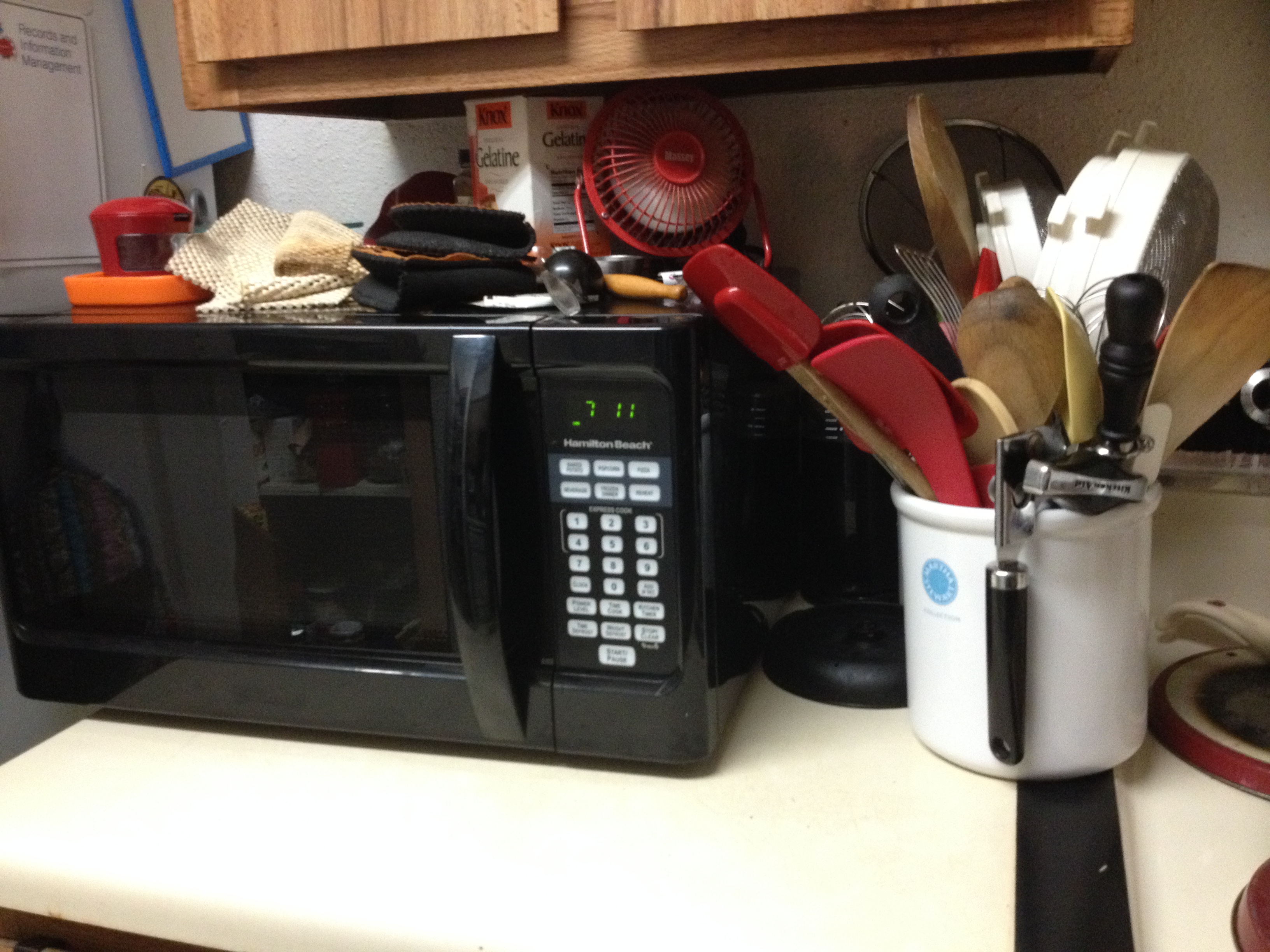 It’s been 15 days, and I apologize. Life has kept me tap-dancing on the bar, if you know what I mean. I wish it would knock it off, I don’t want to dance anymore.

I have a couple of posts that I’m still not finished researching. . .they’re in the draft folder.

I have been told that three ladies from my favorite, fabulous HEB have begun to read this humble blog. I saw Miss Sunie yesterday, and she’s read the last post, where she also appears. Miss Lei lost the URL, so I gave it to her again, and Miss Carolyn. . .I think she found it too. Welcome to this humble blog. I hope you enjoy in what’s presented. Please feel free to read through the archives. You can also sign up with the widget on the right side, if you like.

When I saw Miss Lei the other day, she was sampling ice cream. . .yum. However, when she offered one customer some ice cream, the customer asked, “It doesn’t have Hatch in it, does it?” No. . .butter pecan. The two-weekend Hatch chili promotion is over, although there are some Hatch things left hanging around. The Hatch plants have gone down to $4, and I bought one with several peppers on it. I might just make some of that Hatch Pesto, but I don’t yet know what I’m going to do with the red pepper on that tree.

I managed to get shots of the Chili Fun Facts Miss Lei had posted in her booth:

OK, admittedly, I was in a hurry taking these pictures. Sorry about that.

Oh, and don’t mix basil and Hatch chilies. I took that half-cup of pesto I made a couple of weekends ago, let it thaw a bit, and added a roasted Hatch chili. Tastes good, but you can’t taste the basil anymore–the basil is completely obliterated. I’ll use it with roast chicken or something.

Sue Moran at The View From Great Island created this delicious looking Cheesy Hatch Green Chili Dip. This looks perfect for football season, with some crunchy, salty chips. (Gluten free chips, of course.)  Sue is the creator of the delicious Meyer Lemon Cake I made a couple of times with Meyer Lemons I grew out back. I’ve subscribed to her blog ever since, and her recipes are pretty easy. I may have to try this dip one day, even if I have to get canned chilies from HEB. I’ll be trying the whole bowl, OK? You want some, you MAKE some.

Let’s talk about something else. The Demonic Possession of the Microwave Oven. For whatever reason, I’ve been plagued with it.

Honestly, it’s hard to believe how long microwave ovens have been around. It’s like a light bulb, we just don’t think much about them anymore. Invented by an engineer at Raytheon by accident, they’re now just everywhere–homes, apartments, offices, commercial kitchens, campers, frat houses, bachelor pads, you name it.

When I was in the Girl Scouts (never mind how long that’s been, because I don’t remember) my troop was taken on a field trip to an LP&L facility in La Place, LA. I didn’t know what it was, but we were given a demonstration of the microwave by one of their home economists, which was one of the “next big things.” The HE opened a can of corn, poured it into a bowl, and when it came out of that contraption, it was hot and the butter melted.

A few years later, they were everywhere, and you couldn’t watch much TV without seeing an ad for the Amana Radarange. My Dad bought our first one about 1976, when it  was advertised as “The Greatest Cooking Invention Since Fire.” (I love Google, don’t you?) With four of us, Mom needed a bit of help in the kitchen, or maybe that’s what my Dad decided. This page says they cost $595: that was quite a sum in those days, probably like a good $3K or more is now.  Whatever the reason, we had one of these gleaming, modern miracles:

And the touch panel, similar to a modern smartphone screen:

It was a big deal–it was like being the first family on the block getting a TV just 3o or so years before. I remember going to my aunt’s place and while my Dad talked to my uncle about it, the uncle replied, “well, I’ve thought about microwave cooking, but I’m just concerned about radiation.” No. . .but eventually, they became synonymous with “kitchen appliances.”

That thing lasted until the mid-90’s, when my parents finally bought another, more contemporary model, and probably for a lot less than the original.

Fast-forward more years than I care to admit to, and things have changed considerably in small kitchen appliances.

Some time ago, I wrote about the Karma of Spare Parts, a continual issue of minor repairs that I’ve been doing, mostly out of necessity. There have been a number of issues, like my slow cooker incidents. However, this one is more serious. It’s the microwave.

When I started this blog in 2012, I was happily using an old Sunbeam microwave that I’d bought for $10 in 2004 from the JSC Swap Shop, a Craigslist-type site for folks in the space program who had access to that part of the Johnson Space Center’s (NASA) Intranet. The GER benefitted from the Swap Shop too–I searched it every Monday and sent him numerous ads that I thought he could use. He bought many things to sell on eBay, and I was glad to help.

Now,  you might remember that the original microwave blew out. I’d bought a replacement glass plate for it, and a roller ring to go under it.  (I returned those for a refund.) What I didn’t know at the time was that the kettle I was using to make coffee was leaking. The water went under the microwave and eventually ruined it. I put some food in it, I heard a noise (BOOM!) and smelled something that didn’t smell anything like food. I realized later that it could have started a fire. Talk about protection from the Buddhist gods! That faithful microwave was toast, pardon the pun. Time for a new one. Well, it was made in 2003, and this was, what, 2014? So it had a good run.

First place I went: Walmart. I’m not a big Walmart shopper, even though some of the goods and services they offer go beyond Target’s. But I go there sometimes for different things. The first one I bought was this Rival model:

It worked great–simple, clean, and just slightly complicated to operate. Until it didn’t. A few months after I bought it, the light started strobing on and off, and so did the power. It also made a weird noise. Oh, brilliant. I pulled the plug, removed whatever was in there, and marched it back to Wal-Mart.

My reason for return: it’s possessed by the Devil.

I didn’t want another Rival, because I didn’t want that to happen again. I should have replaced it with an identical model, but I didn’t. I liked the red one.

The one I brought home, however, was a West Bend, but looks identical to this HB. Then recently, I was making some microwave popcorn, and darnit, it was only half-popped and the light was out. It was plugged in, but. . .nothing. Being a bit of a computer nerd, I unplugged it and plugged it back in. You know, just like you do with Windows 10–restart it, right? Yeah, that worked. But even though it pretended to run, it wasn’t popping popcorn. The magnetron tube, apparently, had blown, for some unknown reason. The rest of the mechanics seemed to be fine, including the electronic bits.

I pulled the plug, packed it into the car, and hauled it back to the Friendswood Walmart for a replacement. Reason for return: demonic possession.

OK, admittedly, I have no way to check and see if demonic possession is real. I just figured it sounded better than explaining it the way I just did. And it got a giggle from the return desk folks. But one young lady in appliances, who happened by while her coworker went to the warehouse to look for the exact same model I was returning, gave me a detailed explanation about demon possession. I kid you not. She insisted that the demon wouldn’t possess the microwave, it would possess me. Really–ask anyone! But after three microwaves went POOF! in the same spot, I can’t give you any other explanation than demonic possession.

And because the Friendswood customer service employees were less than enthused about my dilemma, I packed it back into the car and went down to League City, where I found a much friendlier and helpful group of folks. The greeter, a young woman about 18 or so, said, “Oh, I love your hair color, it’s gorgeous!” I thanked her, of course, and I wasn’t dressed to the nines. The next girl in Customer Service enjoyed my comment about the microwave being a victim of “demonic possession.”

After a short discussion and comparison with a nice man named Chris in appliances, I found my replacement. So this is the one that came home with me last week:

All three times, I was able to exchange the microwave for something different. Unfortunately, Walmart’s variety is a bit. . .better on their website, but I was not about to wait.

What I had in mind was something like this: 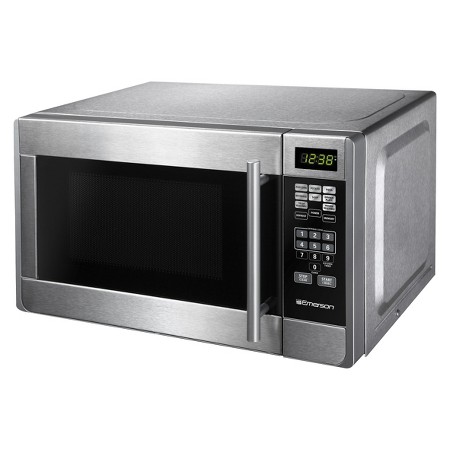 But no, I had to go “up,” long story. Now I have this huge, honkin’ microwave in the HeatCageKitchen.

The kitchen is being taken over by a microwave.

I have to move it over to the left to use the kettle; I have very little counter space to work on now. Maybe I’ll just sell the Hamilton Beach on Craigslist for its MSRP or something close to it, and go to Target and get the smaller, less expensive one. . .but right now I have, if you’ll pardon the expression, bigger fish to fry.

It’s what I get for thinking. Just the other day, I was thinking to myself, “hey, make sure the next microwave isn’t so big.” Next thing I know, I was getting a new one. Just not the one I envisioned, that’s all.

I may be taking a break from blogging, since life isn’t letting me alone. So if I don’t get back here soon, well, you know I’m thinking about other things.

And maybe getting myself an original Amana Radarange one day, along with some Suzy Homemaker appliances. Then I will have a truly fabulous kitchen, right? (Just kidding.)