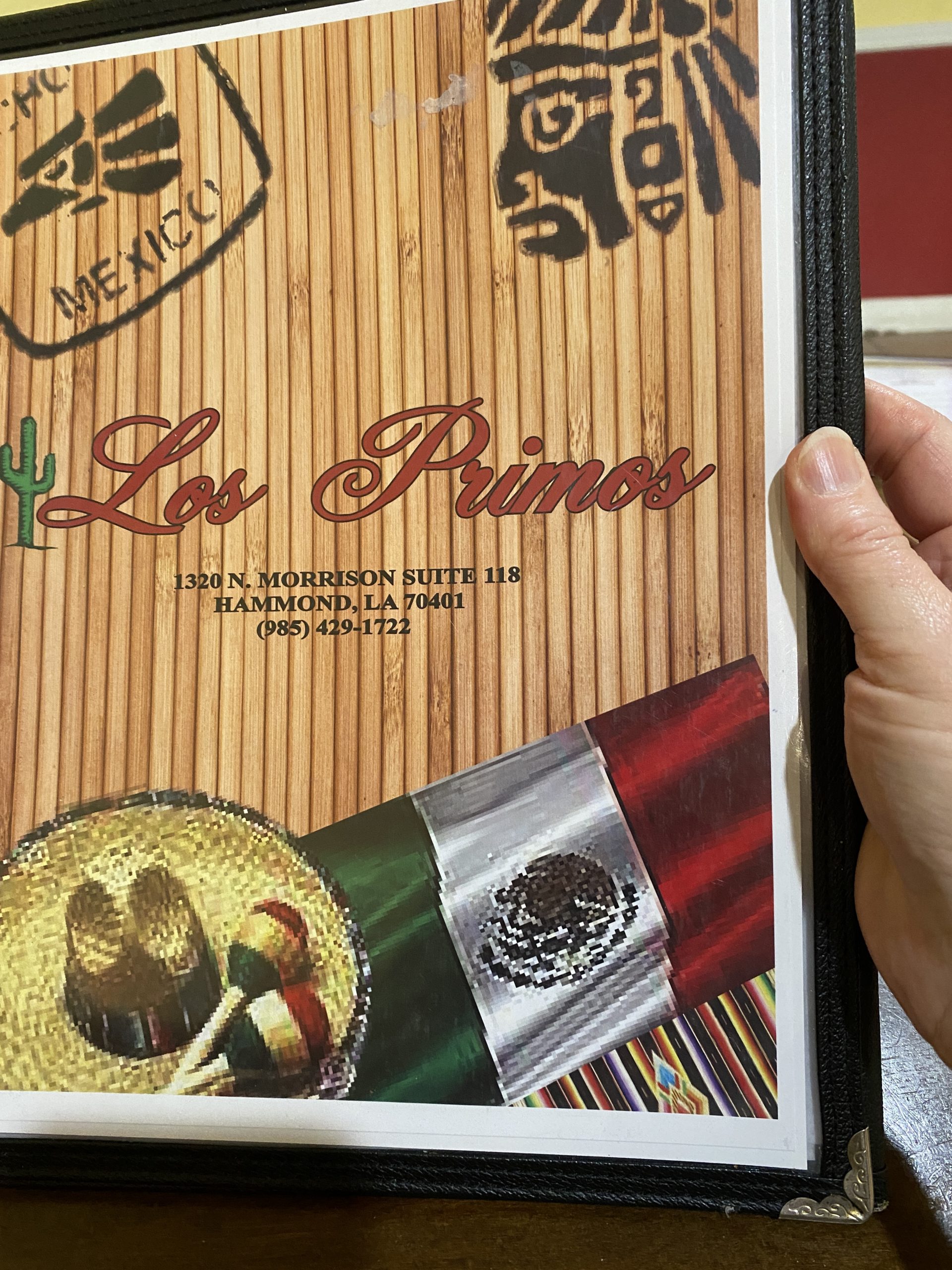 In the quest for delicious Mexican food in the middle of Louisiana, Los Primos is an oasis of deliciousness. Come along for a trip with me and BF.

This week marks six years since I crossed the Sabine River to visit BF for the first time. We didn’t “celebrate” like we did last year. We’ve decided on a movie for Valentine’s Day: Ghostbusters: Afterlife. We’ll get that from the red kisok somewhere.

I suggested the fourth installment of Hotel Transylvania, which is only currently available for streaming. But BF thought the newest Ghostbusters film would be better. The menu is yet to be decided, but we’ve got some great choices. There may be some chocolate waffling going on, too.

My phone went off with a text notification a couple of weeks ago from our very nice animal communicator friend, Ami Pope. She read my previous post describing him and enjoyed reading the stories. She said that Spencer was glad I shared all the memories and was surprised that I remembered everything. He is very happy with a new family, running around, and sends us much love.

Spencer was unforgettable. And I forgot to mention one more thing about him: he was also a mouser.

Living in the “piney woods,” mice are a given. We’ve had them a few times but have taken steps to keep them out. Mousies are especially persistent when it gets cold because they just want to be warm.

You’d think with a cat, we wouldn’t have any. Sealing up the holes has kept them out for some time, and we’ve not had any inside since. BF caught one or two with a sticky trap, Tab E. Cat has caught six, and Spencer caught three. No kidding, he really did, but we didn’t take any pictures.

When he found them, Tab E. Cat’s feline hunting nature would quickly become activated, and he sprang into action. The mouse didn’t last long after that, and I apologized to each one for the outcome of their visit. In BF’s case. he picked up the trap and took it out. Spencer would just leave them in the middle of the floor and stare at them, wondering what they were.

Actually, Spencer caught four if you count the “big mouse.”

A few years ago, we went to someone’s house one summer evening so BF could help a coworker work on a car (naturally.) Anticipating a short visit, we put the dogs out with fresh water and left. It was only about five miles up the road.

As things often do with cars, it took longer than expected. One of BF’s favorite mechanic memes says, “Every 20-minute project is just one broken bolt away from becoming a three-day nightmare.” That was certainly true in this case, and we returned home at about 1:00 am.

When we pulled up to the house, I looked over at Spencer’s little spot and he was not alone. There was another creature lying on its side, looking, well, deceased. Spencer was looking around like he didn’t understand why the creature wasn’t moving. I said to BF, “Honey, there’s something over there by Spencer.”  Both BF and Spencer were unfazed by the creature’s presence. I didn’t know what to think but was still a little freaked out.

I stayed in the truck, and BF fearlessly approached the creature that was somewhat smaller than Spencer. He quickly discovered that it was “playing possum.”

Carefully, BF picked up a shovel and approached what he realized was a standard American opossum. This beast opened one eye at BF as if to say, “hey, can you help me out here?”  BF then gingerly scooped up the animal with the shovel, carefully carrying it to the back part of the property behind the house where there are large trees. On the way, the possum looked at BF with a look that said, “is the coast clear?”  As BF slowly lowered the shovel to the ground, the animal gave him one more look that said, “Hey, thanks, Buddy!” Off he went into the dark night, never to be seen again.

A few months ago I told you about the accidental discovery of the grocery store called Los Primos in Hammond. I was ecstatic, and still am. Finally, I got BF to consent to a dinner date at the restaurant side. We were not disappointed, either.

When most locals think of “Mexican food,” two places come to mind: Taco Bell and La Carreta. While the food is good, I’m not a real big fan of La Carreta. Mardi Gras decor and Fleur de Lis on the metal tabletops in a Mexican restaurant? No. But it’s *the* place here, with steak nights on Thursdays. (There’s also a La Carreta in Hammond, but we’ve never been to that one.)

So one particular evening, we set out to Hammond for dinner. We happened to have been on a long phone conversation with Ami’s husband at the time, no kidding. After hanging up, we went in to have some delicious and authentic Mexican food.

This greeted us, along with the menu. Cute, isn’t it?

Then a nice lady handed us the menus.

She didn’t speak too much English, so you know it’s authentic. (Most of the staff in La Carreta speak fluent English with varied accents, none of them Hispanic.) Oh, and don’t forget!

Yes, you’re all about self-control until these show up. Hey–I’m not sedentary!

While BF ordered his usual Coca-Cola, I had no problem asking for slices of limos for my water–and they brought me some.

THIS is the real thing!

BF didn’t seem to mind that it was Mexican Coke, famed in Texas for having cane sugar.

Looking around, we saw some equally authentic decor:

It’s a nice portrait of a man named Emiliano Zapata, a Mexican revolutionary and political figure. There was also music by:

Pepe Aguilar was actually born in San Antonio, Texas but raised in Mexico. Born into a musical family, Pepe is very famous in Mexico for his music as well as being a businessman. We just enjoyed the music while we were there.

What We Had For Dinner

As I’ve said before, I don’t speak much Spanish. Fortunately, these nice folks at Los Primos do understand enough English to take orders and whatnot. We were the only Gringos having dinner that night, and it was a Tuesday or something, just a week or two prior to Hurricane Ida.

So BF ordered steak fajitas on this date night:

And as is my habit, I ordered shrimp fajitas:

Because they are shrimp that I don’t have to mess with. Both plates also came with accompaniments, including handmade tortillas:

Oh, these were good!

Needless to say, there were takeout boxes involved. And a spot of shopping in the grocery store side after we were finished. BF sat in the truck while I shopped.

I’ll just admit that the wait for dinner wasn’t long, but my curiosity also got the best of me.

Chances are you’ve seen regular-sized bags of this masa harina in the grocery store, especially if you’re in any grocery in Texas.

That’s a lot of masa!

I’ve got one in the pantry, sealed up for the next time I attempt tamales. But like any restaurant, they buy larger sizes of everything, and masa harina is no exception:

I’ve never seen these before, even in Houston. After trips into so many Mexican restaurants, I’ve never seen a bag this big. Even visiting places like the El Dorado Mexican Restaurant in Clear Lake never let anything like this sit out. That’s OK, since Los Primos is an authentic little place much like El Dorado, which is also family-owned. (And they’ve got a new location in League City.) These 50-pound bags were just eye-popping!

Much as I enjoyed going to El Dorado, I’m also glad to find Los Primos for a little taste of Mexican food right in Hammond. We’ll be going back for another delicious meal.

Winter is still here, and Mother Nature is offering bipolar weather with up-and-down temperatures that look like lottery numbers. But since it’s still winter, I thought nice hot soups would be a good idea. Two easy and tasty recipes are lined up for the next blog post. Both are good, easy to make, and. . .vegetarian. But there is a considerable amount of cheese involved. BF actually likes one of them, so stay tuned.