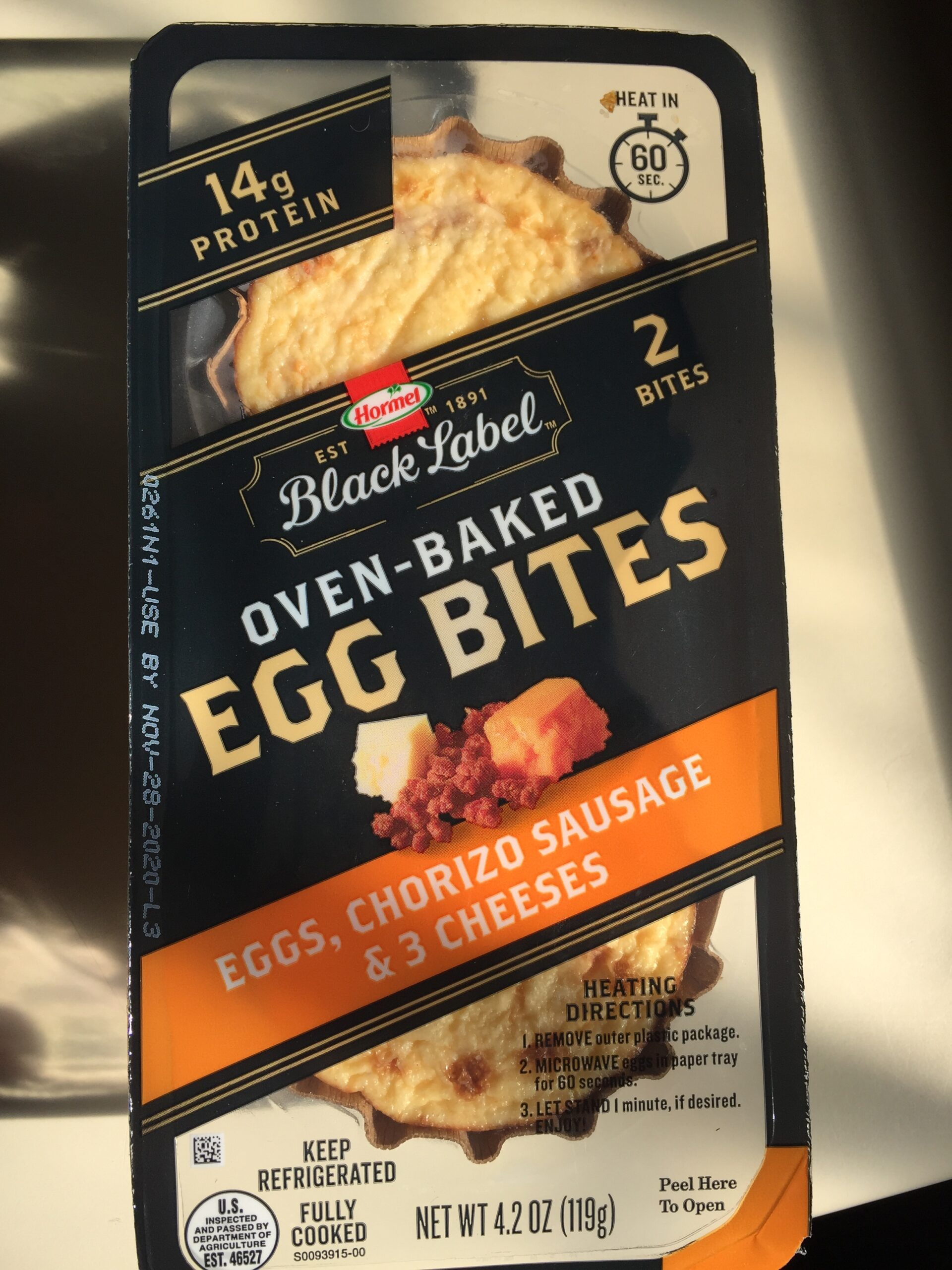 Egg bites: another Starbucks trend that’s gone mainstream. Make them or buy them, they’re a great meal or snack anytime.

It’s Monday, and did you know? It’s three weeks past my birthday, and ten days until Thanksgiving. When did this happen? Oh, right–while we were all working on stuff and going about our daily lives and trying to hold onto some kind of “normal.”

Our recent lives here at the Casa de Rurale have included a few changes that I won’t bore you with here. But as always, we’re working on it.

The district leaders, originally from Taiwan, invited anyone who had no plans to go anywhere and wanted to spend it with friends. And that’s exactly how it got started. I enjoyed the heck out of it, but things change and people change, and it eventually didn’t happen anymore.

I found a recipe on Facebook that Giada de Laurentiis posted for a stuffed turkey breast that I may make for us, and anyone we invite. I’ll let you know. But if it’s just me and BF at the homestead, that’s OK too.

I’m still at it, but now I have a little support, too. BF never minded–he asked once if it was safe–but I’ve also found a simple-to-use app called FastHabit. It helps you track your fasting, reminds you about it, and you can start and stop anytime.

On a recent Saturday, we were out with BF’s family and we all went out to lunch.  I ended up fasting for almost 20 hours. I was really hungry, but I was OK.

I’m using the free version right now, but the paid version is a one-time charge of $3, so I may go ahead and buy it soon.

It’s available for both iPhone and Android devices, is simple to use, and sets up quickly. You can also adjust the time you fast, keep going after your set time–whatever.

Weight loss? Yeah, I haven’t checked, but I’m still in the FB group for it.

One of my writer friends went looking for the “white noise” kind of thing, ocean sounds, and the like and found the same thing.

I don’t know if you could find them for, say, country or classic rock. But I found multiple jazz stations, and they change every day. If you’re looking for “work from home” music that keeps you from being distracted, check it out. You might find something you like, and new every day.

I’ve written before about Starbucks’ ideas making it into the mainstream. Remember when you got to-go coffee in styrofoam cups, and a paper cup with the sleeve was the “new thing?”

Even if you have never set foot in a Starbucks, you’ve probably heard of the Pumpkin Spice Latte or PSL. Since its introduction in 2003, “pumpkin spice” everything has emerged, including some rather amusing memes. I’ve seen a number of “pumpkin spice” things available in the fall. The motor oil, toilet paper, and cat litter are part of the fun memes that make fun of it.

Remember: pumpkins are also harvested in the fall, which is why it’s a fall thing.  But you can buy canned pumpkin all year long. No kidding.

So in addition to the PSL, there is the Pumpkin Spice Creme, a different form of the drink. The PSL is also available iced. Up until 2015, there was no pumpkin in any of it, only the spices in a pumpkin pie. Today the heavy-sugar syrups do have some pumpkin puree in them.

I’m still not drinking the PSL because I remember how my teeth wiggled for hours after I drank it. Other coffee shops and chains have also taken up the things that originated in Starbucks. But I do enjoy some of the decaf pumpkin spice coffee I find at Target in the fall. And since the Cranberry Bliss Bars have returned, I might just have one of them soon, too. Just one.

Not Just In The Store Anymore

So after the Sous Vide Egg Bites debuted at Starbucks nationwide, they quickly became a fan favorite.

These are well known among fans. (Source: Starbucks website)

They’re a great little snack anytime.  People doing low-carb and keto love them because they’re a breakfast alternative on the go. They’re heated in an oven, then served hot and fast in a little paper tray. Perfect with hot or iced coffee, iced tea, or even water.

I really like to avoid prepared foods, but occasionally, they’re not a bad thing. So maybe they’re not new to you, but I just saw these this morning in Rouses:

In the refrigerated section of Rouses. These run about $5 at Starbucks.

I was going to pass them up, but then the word “chorizo” caught me. And no futzing around in the drive-through, either.

I almost forgot about them until I pulled them out of the bag with the rest of the shopping. By then it was time for a bite to eat.

I didn’t see anything bad. . .although I glanced.

I know, it looks like a lot of ingredients, but remember that each component has its own ingredients–chorizo and cheese, in this case. But they were quick to make:

They were literally heat and eat, and have the little paper tray just like Starbucks:

You microwave them in the paper tray for a minute or so, and they come out just fine.

I’ve had Starbucks version of chorizo, and it’s not like this one. The chorizo here tastes pretty darn good, and there is a “bite,” unlike the Starbucks version. If you don’t like spicy, might want to pass on these.

Although mine have bacon, not chorizo, this is how they compare:

Hormel’s are slightly bigger than mine.

I didn’t use a “recipe” for the latest batch. I just whisked up some eggs, cheese, cream, cooked bacon (ends and pieces cooked and crumbled), and maybe some Chipotle Tabasco. That’s really good in egg dishes like these–not hot but adds a Southwestern flavor.

Like a lot of things, there are recipes all over the web for egg bites in nearly every incarnation. After trying several recipes it was time for me to make my own, my way. Next time I’ll make the chorizo myself and then make the egg bites.

As you can see, the Hormel version is a bit bigger than my IP version, for which I use a silicone egg bite mold. I made two trays of them at once, and haven’t had them every day. But heck, if you’re that hungry, eat three, right? It’s keto.

I’m going to admit that making my own egg bites in the IP is a bit of work, but I sure do enjoy them. BF won’t eat them, even though they’re bacon-and-eggs, because he, like the GER, is not a fan of Starbucks.

Dude: you can have your egg bites without going there.

Not Just Egg Bites, Either

I saw these in Rouse’s as well but didn’t notice the price. Maybe next time, Honey!

You know I’d pass on these because of the pancakes, but if BF wanted one, I’d certainly get it for him.

He keeps around the powdered pancake mix so that he can whip up his own on occasion, and drown them in syrup. Just wish he’d learn to use a knife when cutting butter, instead of the spatula. When he uses a fork, it looks like a bear clawed it. He really mauls a stick of butter when he’s in the kitchen.

You’d think that breakfast is just breakfast, but it keeps evolving. So if you’re looking for a quick and easy breakfast but don’t have time to make it, you’re in luck. Find some of Hormel’s egg bites in the refrigerated section or some of Jimmy Dean’s version of frittata breakfasts in the freezer section, which are along the same lines. A low-carb breakfast is a reality for busy folks.

Just don’t say the word “frittata” in front of BF, please. It gives him the shakes.