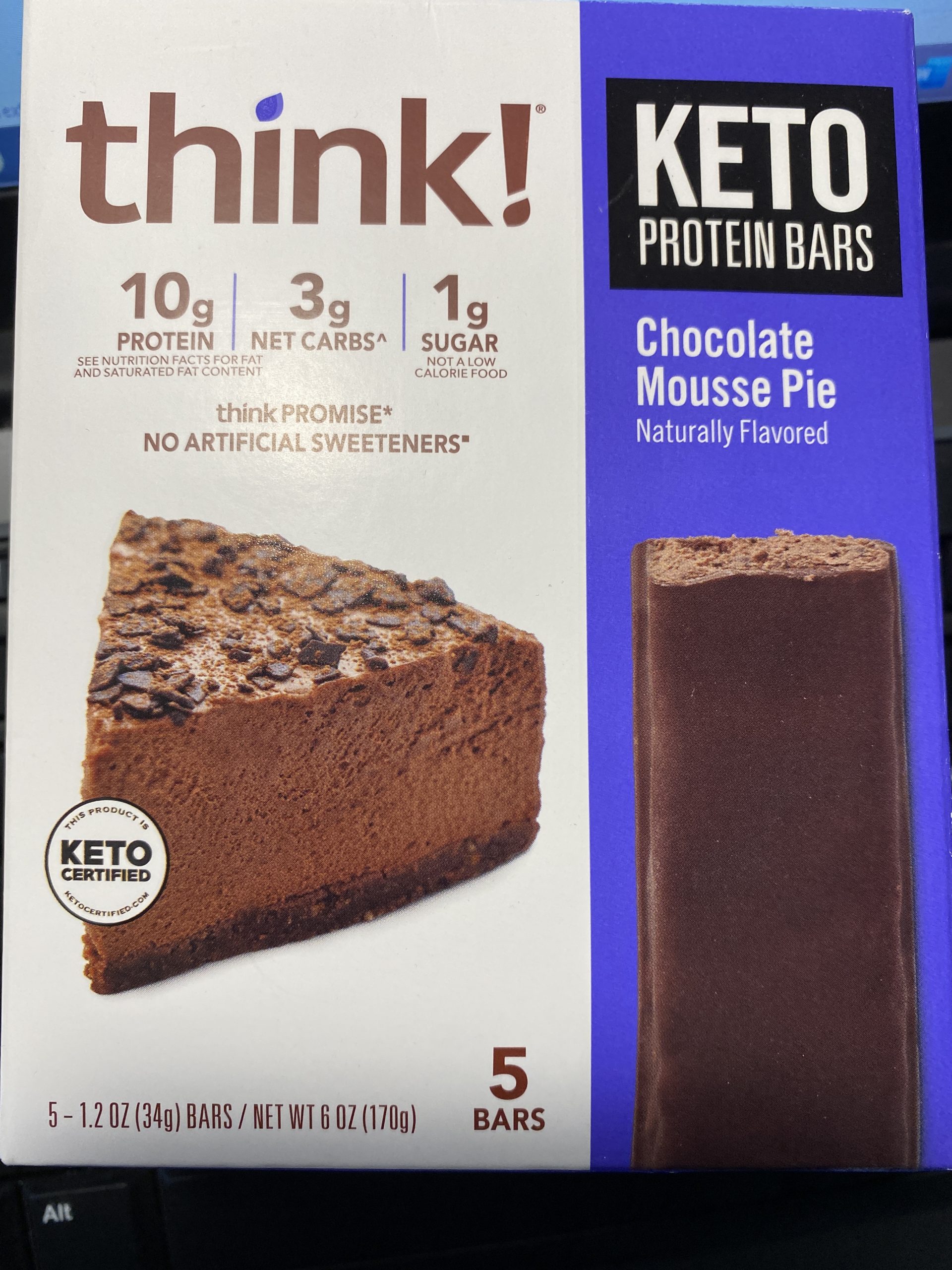 Keto and chocolate do go together!

Spring is here, and I’ve got a sweet treat that you may like. It’s especially important if you like chocolate, you’re doing keto, or just want to avoid sugar for whatever reason.

It’s a short post today, with just one or two updates, but I’m working on a couple of longer pieces for upcoming blogs.

Well, after last week’s post on the meat box from Misfits Market, I finally got BF to sit down with me right before the deadline and look at what was being offered. His eyes glazed over, and he said, “this is all for you. There’s nothing really here that I would want. Just order whatever you like.” I didn’t see anything we needed immediately, so I canceled the order, and put my account on hold for a month. Chances are, I’m going to cancel it, but we’ll see in a month. I tried.

Buddy, AKA “Broccoli, Stir-Fry”, is growing quickly and he’s not getting any better. The weather has been good so I’ve had the windows open to blow out the “aroma.” He still continues to ignore his “puppy” training, so I guess I’ll be spending more time on YouTube.

There he is, the little monster.

One solution that’s been offered I’ll be trying this week. There’s something called Angry Orange, a citrus concentrate that is designed to knockout pet odors quickly. Scented candles are just not working, and even the old reliable BioKleen Isn’t doing the job with this guy. Plus, he’s fast as lightning and doesn’t seem to be getting the hint.

A project manager with one of my agency clients told me about it, and I’ve ordered a bottle of the concentrate type, so that I can make it in a squirt bottle, rather than buying it ready to use. I’ll let you know what happens in a future blog post.

A few years ago, BFF’s sister and brother-in-law, who live in Atlanta, had some of these protein bars called think! (and yes, the spelling is correct.) That’s the company name and the brand name. You may have even seen them and not noticed them. The company make a series of protein bars, that are low in sugar, and are healthier than granola, candy bars, etc. I never noticed them before until I tried one on their weekend visits. The white chocolate berry flavor was also good, but they don’t seem to make it anymore.

I liked these, too, and I bought them myself for a while until I got a bad one. It was so bad that I never bought them again.

The company makes a variety of different types of protein bars. They also make healthy oatmeal, which I’ve never seen anywhere except on their website, where you can order it yourself.

Even after the hurricane was over, I still referred to them as “hurricane snacks.” Maybe it’s just my dislike for many things, but I just never touched them again after a bad one, and never contacted the company, either. I remember them being about six dollars a box at that time.

During my last trip to Target, when I saw shortages of cat food, I was walking around in the back of the store where they keep these kinds of things. I wasn’t looking for think! Bars, but there they were. Then I saw something magical:

These were more expensive, at $6.79 a box. (The price has since increased, which I’ll explain in a minute.) But being the chocolate lover that I am, I bought a box.

There’s a lot of chocolate flavor in this little bar.

Ok, so I didn’t cut it exactly right

The bar has a lightly crunchy texture that bridges the gap between. “diet” and regular candy bars. And it’s really well-made piece of confectionery, in this food blogger’s considered opinion.

What’s it for? A snack, a meal replacement, or something with your coffee, morning or afternoon. I call it a chocolate craving satisfied. It’s sweetened with erythritol, too:

Where have they been all this time? Apparently think! Keto Chocolate Mousse Bars have been around for quite a while, just not in Louisiana. Maybe because I haven’t bothered to look for them in a couple of years, I never really noticed them. But if you look at the Amazon reviews, you’ll see reviews going back to 2019. My guess is like everything else in Louisiana, it was very slow to get here.

As I mentioned earlier, I paid $6.79 for a box of these in our Hammond Target. However, when I checked to see if our local Walmart had them, they did. But the cost was considerably more, at $8.06 a box—ouch! Quite a jump from Target. But checking Target’s website now, they have also gone up to $7.99 a box In the week since I’ve been there. Albertsons also carries them at $8.99 a box. I haven’t been to Rouses to check for them.

Once the price of fuel went up, everything else followed because it costs more to ship.

Now I wish I’d bought an extra box at Target, but whatever.

They are always available for order, both from the company’s website, as well as from Amazon. However, because they are chocolate there is the risk of them melting on the trip. If you’re going to order some from either place, it’s probably a good idea to make sure you’ll be home when they’re delivered so that they aren’t left out in the sun for a long period of time.

In the Houston area, Kroger Has these chocolate mousse bars, at a cost of $9.99 a box. Randall’s has them for either $8.99, or $11.99, depending on whether you belong to their membership program. (I’m guessing that’s like. Winn-Dixie’s Rewards program; it’s been a while since I’ve been to Randall’s.) Texas’ favorite H-E-B carries the think! protein bars, but not the keto brand. But you can always make a request to your grocery store to carry them if they don’t already.

Amazon has an entire store of think! Products if you’re interested in researching them there, or buying a case.

Delicious as they are, think! Keto Chocolate Mouse Bars are a pricey treat. They’re probably not something you should add to your regular grocery list, just for an occasional splurge. Unless, of course, you’re trying to impress someone who’s doing keto.

Solution? Start making keto fat bombs and seek out good recipes for them. If you’re not already on Pinterest, you can do a search for fat bomb recipes, or get started here with 50 fat bomb recipes from The Keto Queens. Most are made from basic ingredients and can be customized to your individual taste. I should try making some chocolate raspberry fat bombs one of these days.

Geez, I hope my mention of these homemade treats doesn’t get me on a “watch list” somewhere!

As consumers move to keto, they’re looking for more sugar-free and otherwise healthy items. Companies are stepping up to the plate and delivering. And now that barbecue season is here (it never really went away for most of us), you can have your BBQ, stay keto and eat it too.

For a long time, I made my own barbecue sauce from one of Suzanne Somers’s recipes, and it was just grand, but BF wouldn’t eat it. Much as I love BBQ, I had to ask him not to put sauce on mine because of what he used. But one day after I moved here, I discovered that you could buy sugar-free barbecue sauce already made. Then it became a staple at the Casa de Rurale:

Amazingly, I never saw this in Houston, or maybe I never looked.

BF used Sweet Baby Ray’s for many years in his barbecue. This particular concoction is extremely sweet. That’s because the first ingredient is high fructose corn syrup, the extremely cheap and caloric version of refined sugar that hides in nearly everything Americans eat.

In fact, most people around here use this and nothing else. I always request that he keep SBRs far away from anything I’m planning to eat, and he does or uses the sugar-free stuff for mine. Eventually, he got used to G. Hughes.

We’ve been buying the G. Hughes Sugar-free Barbecue Sauce for a while, and BF actually likes it. In fact, one day when we were somewhere else having BBQ, the host used Sweet Baby Ray’s.

After having SBR’s for the first time in a while, BF declared that it was “way too sweet.” That was a surprise because he always fussed about using sugar-free barbecue sauce until he discovered it was pretty good. He’s now a convert, and the G. Hughes Smokehouse sugar-free version is our preferred barbecue sauce. We like the Hickory and Mesquite the best, but we’ll buy any of them. They don’t taste “sugar-free,” either. We try to keep at least one or two bottles in the pantry.

I discovered the other day in Walmart that the company also has other types of G. Hughes sugar-free condiments that are now available in our little neck of the woods.

I haven’t tried these but probably will soon.

There is also an Amazon store for G. Hughes Sugar-Free products. If I suddenly found myself with a large Amazon gift card, chances are that’s one of the stores I’d visit.

I know this is a shorter blog post and I normally write, but I’m still working on several ideas for future blog posts. One of them is a “spillover” from my regular client work, and you’ll see what that means when I publish it. Don’t worry, this one isn’t a heavy legal subject, and will be quite tasty as well as interesting (I hope.)

And now that you know that you can find a few more tasty sugar-free treats, your weekend barbecue just got a little bit better.