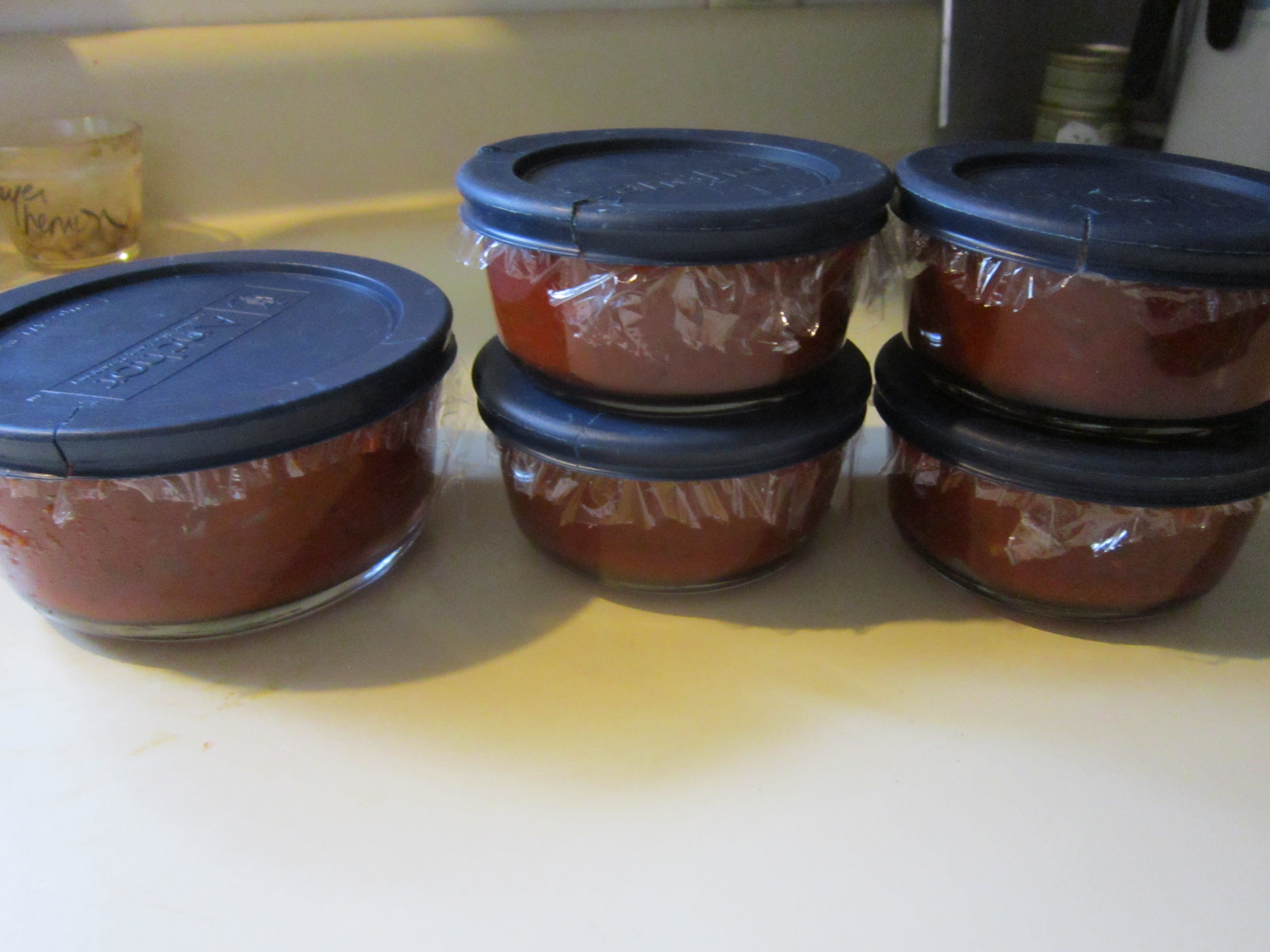 Today, we got our new President and a stylish new First Lady. We watched the inauguration and I saw the most beautiful powder blue suit I’ve ever seen. Now I want one, but in royal blue. I hope the pattern companies create one like they did for Kate Middleton’s wedding dress. Quickly.

Well, I got the hankering again for them. Pizza. Waffles. But life throws us curve balls, and in this case, it was the end of my HEB Organics Pizza Sauce, darnit.

Since we have Winn Dixie and Walmart for shopping, I didn’t find any good alternatives there. This is what’s in the HEB version, which was less expensive than Classico:

Now what? I’m limited if I don’t find an alternative. But–after seeing something on Facebook about pizza, I found Foodie With Family’s recipe for pizza sauce–in the slow cooker, darnit! It’s pretty simple, too–you just need to stir it frequently.

Almost everything you need–I forgot the sugar.

I made sure to look for as many ingredients that were not GMO and in cans that did *not* have BPA in the liners. Cost a little bit more, but of course, there’s a payoff elsewhere–even if BF doesn’t see it that way. I’ll explain more about that in the post that I’m horribly late publishing.

You have to look to make sure there are no GMO ingredients.

Another thing you have to make sure of is the ingredient list–is there sugar? Soybean oil? What else did they put into the “tomato paste?” No, no, no–read that label. I have returned tomato products before that I found out too late had other ingredients in them.

So,  you open up some cans of tomato paste and tomato sauce, and dump them into the crock:

Only a can opener is required here.

Then add in some garlic:

The return of the garlic doo-dad!

It says minced, so I minced:

It says one to four cloves, so I added four.

Now, this may offend some of my more sensitive readers. I added the one filet of anchovy, and thankfully, BF was nowhere to be found. I found the tin in the back of the pantry, under something else. Miss Alice packed up everything so carefully, and I am still not unpacked. But I was glad to find this.

If you’ve never seen anchovies, well, this is what you get when you open the tin:

See how tiny? I only needed one filet.

So after separating one of these much-maligned fish pieces, I dumped the rest of it into a glass jar and stuck it in that secret drawer where I keep things I don’t want BF to know about.

Added it into the crock and that was it. Honestly, you won’t taste it, because it melts into the sauce and gives a subtle background flavor.

I used the EVOO since the recipe called for it.

The herbs, oregano, basil and parsley:

I had to go find those in the pantry boxes first. Then, the ingredient I almost abhor the most:

Yes, sugar, but of course, a raw sugar:

This sugar is unrefined, and not bleached like granular sugar

Tomatoes, especially canned, can be very acidic, and you don’t want the sauce to ruin pizza. The recipe calls for one tablespoon first, and then the second after cooking, but I added a tablespoon of SomerSweet at the end. I chickened out.

Once you’ve got all the ingredients together, whisk them together:

Until it’s nice and smooth and all mixed.

Cook on Low, but stir every half hour or so, for 4 hours. I know, I know. . .but it’s not that much trouble. You don’t want it burning in the pot, do you?

At this point, it’s up to you to see if you like the way the sauce tastes, or if you think it needs a bit more sweetening. I think it did, so of course, I added the. . .SomerSweet. BUT–I could have added another tablespoon of the turbinado sugar, or even a packet or two of saccharin.

I forgot to take a picture of it, but after it cools, mix in the cheese.

Now it’s time to freeze it for whenever you need it next:

Pizza sauce for a long time!

I didn’t feel like looking for more of those glass containers. And I put the plastic wrap on it to make sure we didn’t have any leaks in the freezer.

You can click on the link or check out the Recipes page if you want to try this for yourself. And why wouldn’t you?

After spraying the waffle surfaces with. . .Pam. . .

And heating up the Griddler:

One of my favorite kitchen toys

I mixed it all up:

And poured it onto the waffle plates:

I let it cook until it looked like it was done:

And attempted, using multiple spatula tools, to remove it from the waffle maker. This is what happened:

BF ate some of the brownies that came out edible, laughed at me a little, and made me promise never to attempt this again. I also added that I would only make brownie waffles using a recipe designed for the waffle maker. Agreed. And then, after it cooled, I washed it all up.

Lessons learned. One success and one flop.

Next post, which is dreadfully overdue, is a very serious subject, and I’m sorry I’m late with it. I need to re-read the book I want to tell you about and why you should read it. I hope next week. It ties in with this post as well as the last one, and you’ll see what I mean when I finish it.