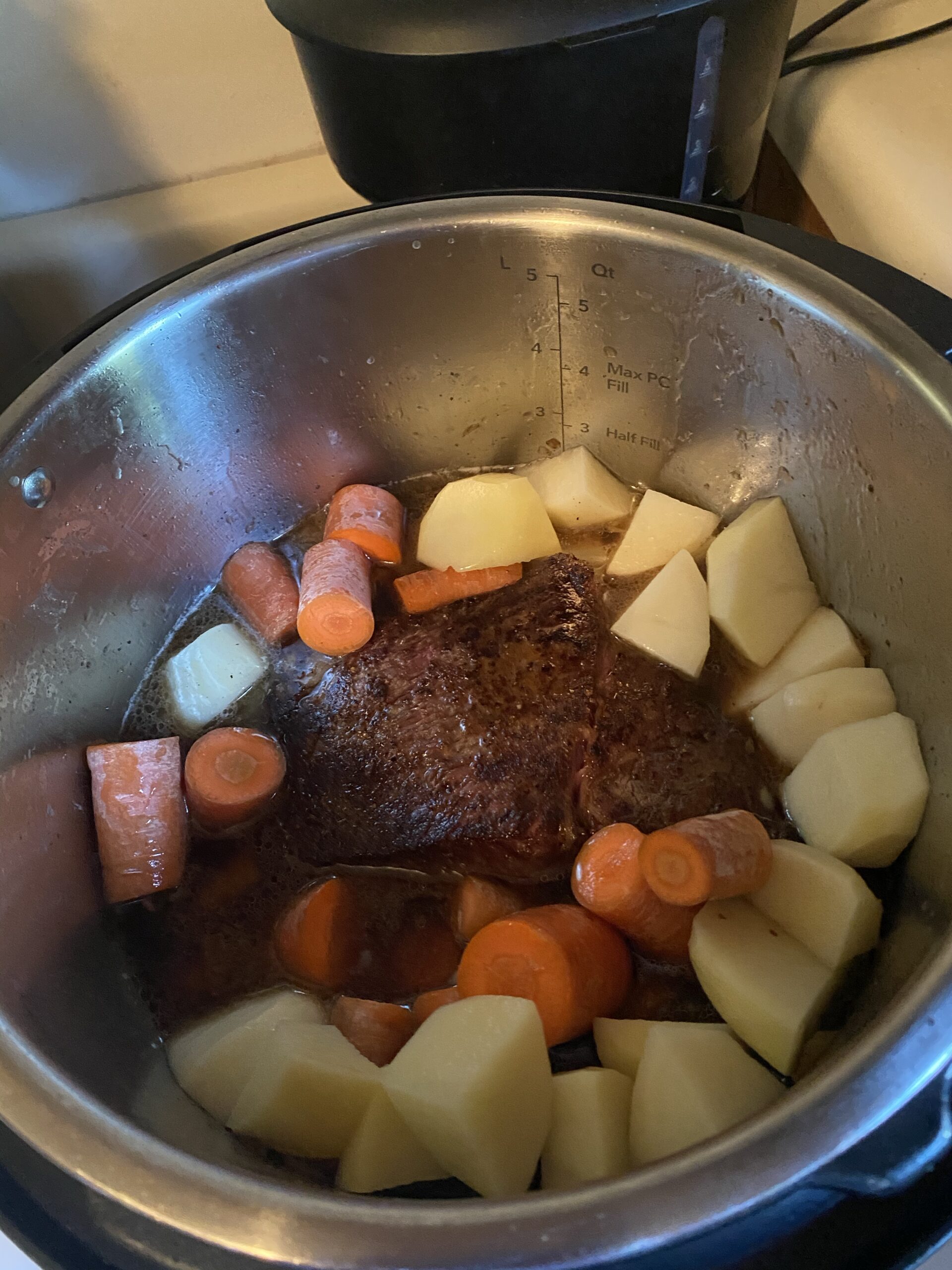 Pot Roast in the Instant Pot. Yes, it’s possible for dinner tonight. I tried one from a fellow blogger and it’s pretty good.

So, piggybacking on the last post about the Instant Pot, I’m reporting on a recipe that a), I actually made, and b) BF actually liked.

If you ask him about what he’d like for dinner, the answer is usually “meat & ‘taters.” Just like that. I’ve made many variations on the theme, but this time, it was strict. Pot roast with carrots and potatoes, and one surprise ingredient. Amazingly, for a change, he actually liked it.

Lots to tell, so let’s get started.

A couple of years ago I was fortunate to be able to introduce you to this nice man when we went to Mr. Earl’s Awesome New Year’s Party:

The man, the myth, the legend!

Alvin Calhoun made some awesome barbecue, and you would not be looking for sauce, either. (Read the previous post to find out what I mean by that.)

We found out a few days ago that Mr. Calhoun had advanced-stage prostate cancer. He passed away the very next day. His children announced it on Facebook.

BF had tried to contact Mr. Calhoun this week, because he was going to bring some motor parts over to him to work on. That’s when BF found out about it. We had no idea he was ill, nor that he was in ICU at the time. I only got to chant for him once, because I had no idea he needed me to.

Although BF saw him again after the party, I didn’t, but never forgot him. He remembered me (and my red hair) and sent home some delicious ribs and things for us to enjoy for dinner one night. I thanked him later, I think on FB Messenger.

This picture will be printed up and framed soon.

This was a very nice man, and we are both saddened at the news. Mr. Calhoun was well-liked by so many, and won’t be forgotten. Thank you for the delicious memories, sir.

No, not that stuff in the can–the digital kind.

If you were the unfortunate recipient of this site directing you to one where you “won a prize,” I apologize. Somehow, the site got hacked, but it’s fixed now. Seems that somehow there were extra plugins I wasn’t aware of, but are now gone. The ever-vigilant Banana Rat found them and removed them quickly, and you shouldn’t see that again.

I subscribe to a number of food as well as other types of blogs, many of which I mentioned last time. Blue Kitchen is written by Terry Boyd and his wife Marion, longer than me–since 2006. While my theme is:

Because good food deserves to be passed around.

As you’ll read in their About section, when things go off the rails–like they do here–the air “turns blue” with, shall we say, colorful language. It happens more often than I admit to. The Boyds haven’t–to my knowledge–detailed the “blue” thrown about in their kitchen in any blog I’ve seen. Just know that I’m being polite when I don’t discuss what is occasionally said in the HeatCageKitchen. I don’t want to get blocked by my own hosting provider.

Based in St. Louis, Terry describes himself as I do, as an “amateur chef.” There’s the fabulous and complicated recipes you see in books by famous chefs, and then there’s dinner you’re making this evening. Terry and Marion focus on the latter, because you always have time to think about the former another time.

Pot Roast In The Instant Pot

As I alluded to last time, pot roast is one of the things that an Instant Pot, other pressure cooker, or a slow cooker works well to create. The super-heated water cooks things much faster, so even a larger cut will cook in less time. This smaller cut cooks in under an hour if it’s not frozen.

When their post landed in my email, I figured this would be a good thing to try. I have a new habit of *not* telling him what I’m making for dinner, but that eventually backfires.

When I said “pot roast,” BF was interested, so I made some. Unlike Terry & Marion, we are *not* trying to consume less red meat. But this was just right for us and one guest, another car-guy.

I know, it’s a lot of ingredients. However, much of it goes into seasoning the meat ahead of time.

So I bought a big roast and cut it in half. One half is still in the freezer.

Just about three pounds of meat.

Cut it in half and freeze the other:

Note that this is onion and garlic POWDER, not SALT. Big difference, and you’ll notice it if you make that mistake. Mix them up:

Real simple to do

Now just sprinkle it on:

Don’t forget the other side, of course.

Terry says you’ll have more seasoning than you need, but I ended up using the whole thing. That’s OK. Onto the next step.

As I always say, READ THE RECIPE FIRST. Always. Or your kitchen will be turning blue as well. Ask me how I know.

So I measured all the liquids first:

Yes, that’s actually fish sauce, and yes, I used it. Obviously, it’s not much. That bottle is in that place in the fridge where BF won’t see it.

And get everything ready for the pot.

I peeled a bunch of these little red potatoes

Cut them into bits

And put them here.

Now on with the show!

Now sear the meat on both sides:

Take out the roast and set it aside on a plate (and in the microwave if you have hungry dogs.) Now cook the onion and garlic, adding more oil if you need it.

Cook it long enough to come out like this:

Add the garlic in right at the end:

That’s the garlic we chopped earlier

Once the veg is cooked, shut off the saute’ function. Add in the liquids, which I mixed in the big cup to add at once:

Scrape the browned bits off the bottom–that’s where the flavor is. Now add the pot roast, the bay leaves, and any liquid on the plate into the IP:

Now add the carrots and potatoes:

Use the pressure cook function to cook it for 40 minutes. When the cooking is done, leave it alone for ten minutes and then pop the pressure out.

Of course, I had company and forgot to take a picture of the end result. But if you read Terry’s page, you’ll see the finished product.

Marion describes the beautiful platter it’s presented on. I just took out the pot and brought it to the table. It was gobbled in short order, and there is one more “winner” recipe I can use.

When discussing “pot roast” and “Instant Pot” together, you will probably hear about a recipe called “Mississippi Pot Roast.” There are multiple variations of this recipe from wherever you find it, including:

I have no idea if this is any kind of “Mississippi authentic.” Never lived in Mississippi and never heard of it until people started telling me about the IP. The thing is, these recipes all have one thing in common: pickles or pickled peppers.

And as I’ve mentioned before, that’s the one thing BF hates.

Serve him anything sour, tart, with lemon or lime, vinegar, sour cream, or tastes anything like pickles is an absolute “no” vote, every time. That lentil salad I made in Houston? He said if I’d served that on a first date, there wouldn’t have been a second one. (Had I known this. . . .) If he goes to a drive-through window and gets a burger, he requests “no pickles.” Frequently, he gets them anyway or the pickles were removed later and he can still taste them.

I told him last night that if his IP-enthusiast sister-in-law brought up MS pot roast yet again, he now had a reason to tell her “no thanks.”

In Terry’s version, there aren’t any pickle-y things. The fish sauce is very mild, it’s a small amount, so it’s not “fishy tasting.” That’s why I knew this would work.

Last weekend I also used the IP for some real Texas chili.

Texas Granola Girl, to whom I also subscribe, has a recipe for Texas Keto Venison Chili on her website. (I have her book, and will review it soon.) I’d forgotten about it, and when I found the ground deer meat in the freezer, I remembered it. (Even commented on it, if you scroll far enough.) Well, I made it last weekend. And I liked it, he didn’t–no beans. I’ll have it all week.

First alteration: I cooked it in the IP for 20 minutes. Perfect.

Second alteration: NO BEER. It’s awful if you don’t actually like beer. I just addeed three cups of organic bone broth instead. Everything else was the same, half ground venison and half ground beef. No beans.

And BF didn’t like it, because it’s not what he thinks is “real chili.” I’ll explain.

Last year, we went to BF’s Dad’s place up the road, where they were making what they called “chili.” They’ve been making it the same way since he was a kid.

What “chili” means to BF is some browned ground beef, a couple cans of locally produced red beans, (of course) and a packet of this rubbish from McCormick. It contains–what?–WHEAT FLOUR. Why?

To “pump up” the flavor even more, his Dad added BEER. (It wasn’t a fancy pilsner, either–it was cheap Michelob Light.) People here do not realize that beer is made from wheat. I always hope that when I tell people I don’t eat wheat that they mention it. But I nearly always get ignored, even when we go out to dinner.

When I questioned the chili’s unusual taste, I was told, “it’s beer; that’s his ‘secret’ ingredient.” Had no idea beforehand, or I would have had dinner at home. Thank heavens I had plenty of Tums on hand.

I just don’t eat over there anymore because I don’t like being sick all night. It happens way too often.

McCormick actually makes this organic version that is gluten-free. We’ve bought it many times, but of course, now we can’t find it locally anymore. He insists that making our own chili and taco seasoning isn’t as good as the packets.

I used to enjoy cooking.

Alternately, you could let this slow cook all day and come home to a nice dinner, but the veg might be a bit mushy. Cooking becomes easier once you get used to using the Instant Pot. I’m always looking for new ways to make dinner, and this one happened to fit the bill.

Oh, and if you like eggplant, Terry & Marion’s latest post is all about it. YUCK! You can have mine, and BF’s too.