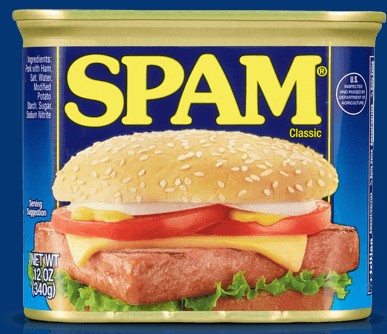 SPAM! This isn’t junk email. It’s all about that ubiquitous canned meat.

In my writing adventures, I learn about all kinds of neat things. Technology, law, current events (whether I want to or not) and I write about them for other people. They pay me for this, although I need to get faster at it so I’ll have more time to blog about stuff that matters.

I also have a thing for vintage cooking stuff–ads, recipes, etc. It’s not that I want to make things like a Jell-O mold that looks like an aquarium, mind you. I just enjoy putting them on Facebook to make people say, “EEEEEEWWWWW!!” (You wouldn’t believe what they used to put into a Jell-O mold and call a “salad!”) But, admittedly, there’s a strange enjoyment from seeing what used to pass for “gourmet.” You’ll see some of them in this post.

On the healthier side, there’s news to report, especially if you like tortillas and wraps. But today, I wanted to have a little fun.

You may be wondering why grocery stores have more “specialty health foods” than before. Things like Caulipower pizzas and other treats, gluten-free cakes, and brownies from baking stalwart Betty Crocker. There’s a good reason for it.

Multiple companies are trying to reinvent flour-based foods for a health-conscious consumer, and those with specific health concerns. And the way it starts is because frequently, it’s a necessity for one person.

In the case of Caulipower, it’s because founder Gail Becker had two sons who were suddenly diagnosed with Celiac disease. When she tried to make cauliflower pizza on her own, she wasn’t successful. So she sought to create the frozen cauliflower pizza for others who wanted it. Today the company sells a range of alternative processed foods around the country, including Walmart and Winn-Dixie. Forbes has an interesting article about Gail Becker and how she got started.

Now comes the company Egglife, which aims to re-invent flour-based tortillas. You can buy Mission Tortillas that are “low carb,” but they frequently come with. . .wait for it–wheat flour. So they’re not gluten-free. That’s no help!

Egglife’s products include six different types of wraps made from cage-free eggs. Like Caulipower, founder Peggy Johns had to cut carbs and sugar for health reasons. They’re found in the refrigerator section and have just launched in Walmart. If you want to get something in front of the majority of Americans, that’s where you put it. So I’ll be looking for them soon and trying them out here at the Casa de Rurale with a full report.

The Definition Of Spam

Do you eat SPAM? Do you know anyone who does? I do–BF eats it. But until I met BF, I’d never met anyone who eats the stuff. Except maybe during a temporary emergency. If you’re in a shelter and the hurricane is blowing down the trees around you, you’ll likely be hungry for anything, and “special dietary needs” can go right out the window. But I digress. 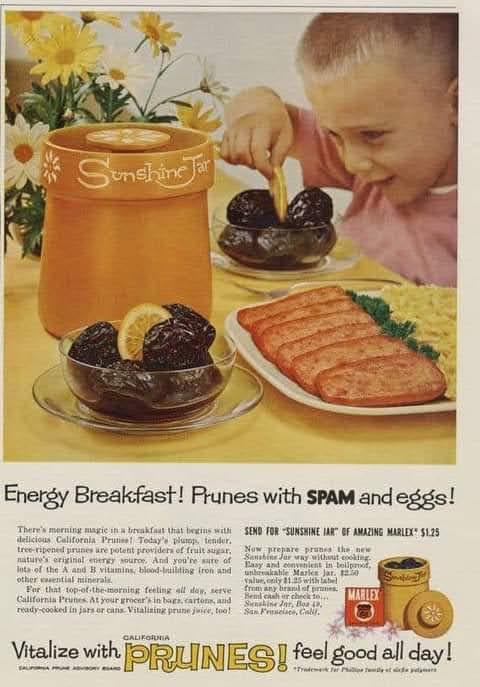 Because Spam goes with anything!

A couple of years ago, a client asked me to write about something called SAP. It’s a computer operating system that has both fans and detractors and elicits reactions from joy to despair. The reaction you get will depend on who you talk to about SAP.

I haven’t had the opportunity to learn SAP (stands for Systems, Accounting and Production), but if I had, I might still be living in the Houston area. Anyway. . . .

While talking with this Manhattan-based client, I said, “It sounds like SAP is the Spam of IT.” He laughed and said, “that’s exactly what it is!” But they make their bread and butter with it (pardon the pun), so we didn’t want to be too critical. Here’s the article I wrote if you want to read it.

I really doubt any Mexican restaurant would serve this.

But then I started thinking about. . .SPAM. It’s always in the grocery, but yet, “nobody” eats it. Really? I decided to do a little research.

Spam was created by the Hormel Company in 1937. There are some differences of opinion on the naming convention, but it either stands for “spiced ham” or “something posing as meat.” I guess it’s all in who you talk to. The US forces during WWII called it “ham that failed the physical.” This was not a compliment, as anyone at the company at the time could tell you. Spam was included in military war rations because it has a shelf life of approximately 9,724 years. A soldier far from home could eat it anywhere, hot or cold, right out of his or her backpack.

It was one of those foods that “thrifty housewives” knew would stretch their food budget like a rubber band. And so, recipes like this showed up frequently in popular media of the period: 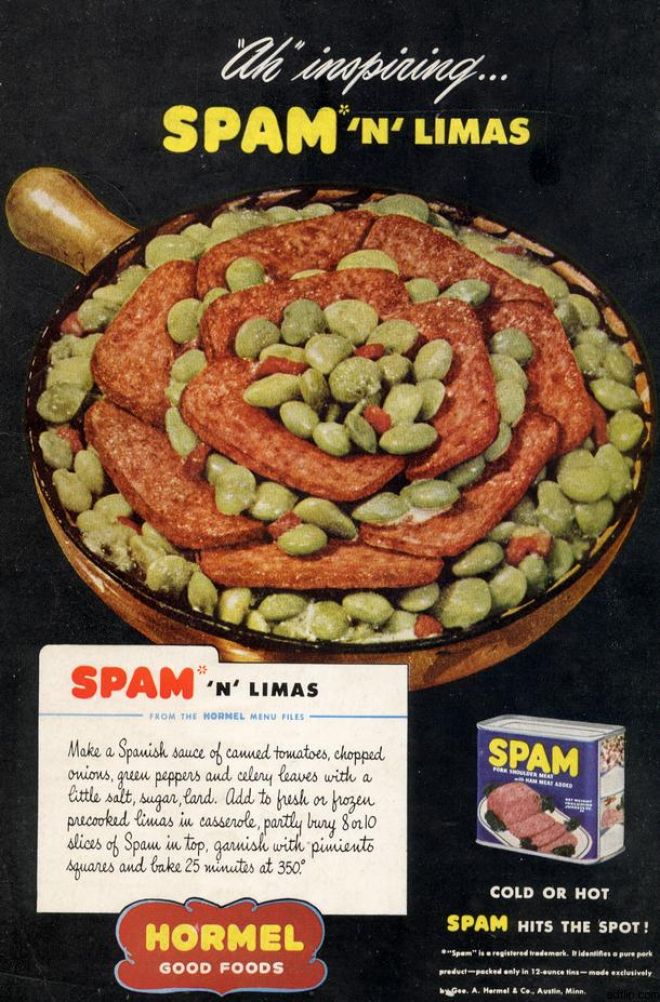 I did offer to make this vintage culinary delicacy for BF. He loves lima beans and Spam. Apparently, having them together like this isn’t as appealing.

Spam was also purchased by governments worldwide to add to their own military rations during WWII. Nikita Kruschev was once quoted as saying that if it weren’t for SPAM, they would have lost the war a lot faster.

Hormel, today, produces approximately 44,000 cans of this stuff per HOUR, every day. That’s not an exaggeration, that’s their own estimate. You know quality control keeps track of these things, right?

So who is actually eating SPAM? Besides BF, of course. One word: Asians. No kidding. SPAM is extremely popular in Asian American cuisine as well as Asian countries.

Spam became a symbol of American generosity after the war, and also kept people from starving in many of these countries. Agriculture took a long time to return to these smaller countries, so the easily transported cans of ready-to-eat protein helped them considerably. Today gift boxes of Spam varieties are a highly coveted holiday gift in Asia. Not a joke–they even have even restaurants on the Islands dedicated to cooking and serving dishes made with Spam. Part of the love of Spam had to do with it being sent to the detention camps for Japanese descendants between 1941 and 1945. That’s why there are so many Japanese residents in Hawaii. It’s a sad part of US history for sure, but Spam love was one small good thing that emerged.

The company changed direction and began marketing the product to post-war American housewives who were now cooking for husbands and families in the 1950s. 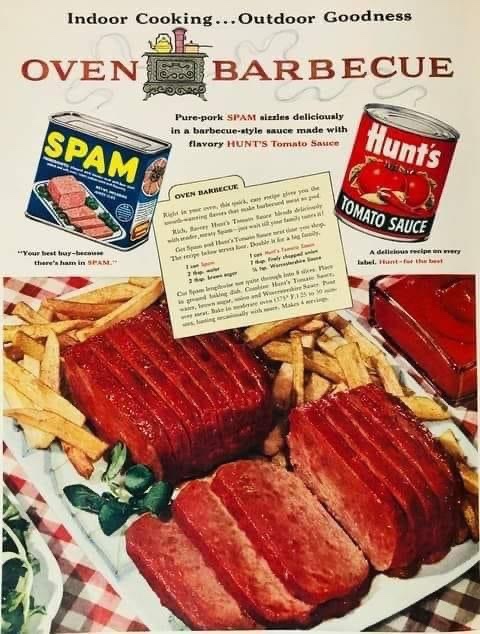 But because so many GIs ate it during their time in the US military, Spam’s pre-war popularity didn’t return. Still, Spam remains a best-seller stateside and quickly went on to gain a foothold in the Asian marketplace.

If you’re old enough to remember the original Monty Python, you’ll remember the skit about the restaurant that served nothing but Spam recipes. The sketch also came out of Britain’s recovery after WWII and the part Spam played in it, much like Asia’s. However, British agriculture returned quickly as did the US’s. There are also a few US restaurants that serve it. Comedy predicts the future!

And yet, when Americans like me think of Spam, the first thought is, “EEEEEEWWWWW!!” Others, like BF, adore it. Go figure.

No–I’m not going to tell you I’ve eaten or cooked anything with Spam. That’s BF’s job, not mine. Usually, though, he goes for a “Spam sandwich.” I’ve also met people who will fry it up in a pan. I’m not one of them.

If the idea of cooking with SPAM appeals to you, their own website has a separate page of over 100 recipes available, such as:

Can you see me crafting these gourmet Spam recipes for BF? How about this one:

If people really ate this way in the 1950’s, that explains a lot, doesn’t it?

In the modern (food) world, one variety of anything is usually not enough. During a visit to our local Rouse’s, I saw some of them: 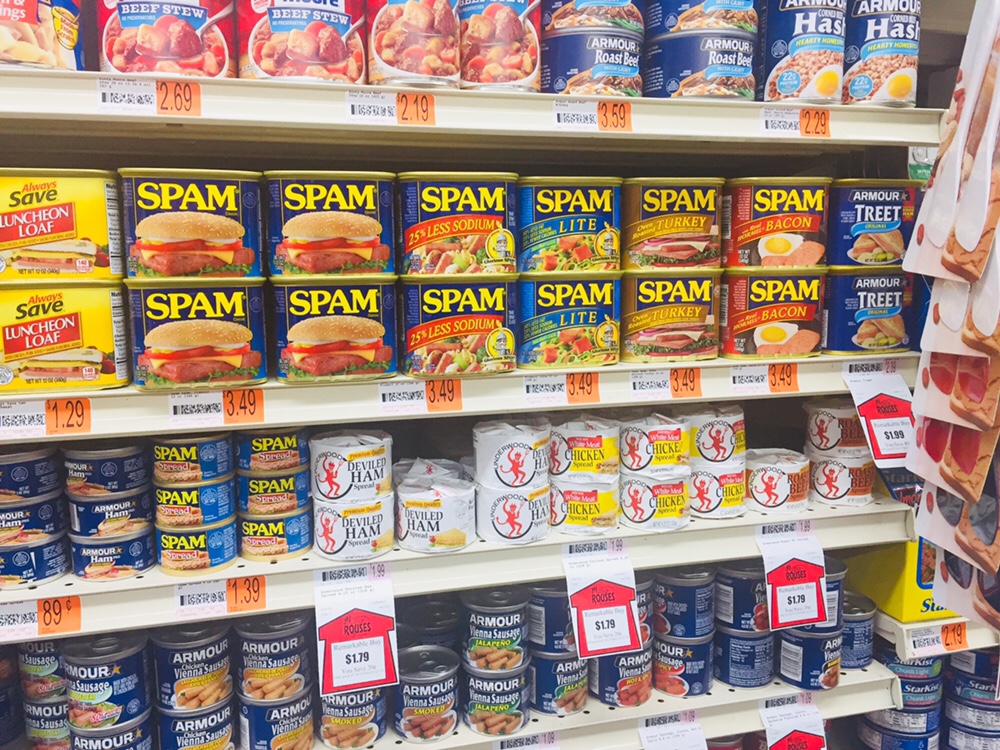 A great variety to choose from, including competitor varieties.

On the left, you’ll see a knockoff version. Our local Walmart also carries several types SPAM. The company actually makes 13 varieties, but I don’t know if all of them are available around the US, and in this part of Louisiana:

Somebody is eating Spam in this country, even if they won’t admit it. And yet, with all the variety presented, BF won’t eat anything but the original.

Well, of course, he does! That’s why things like lentils, quinoa, Waffled Falafel, and Overnight Oats are so foreign to him. (Aunt Ruth is still laughing at my description of BF’s first taste of overnight oatmeal.)

BF grew up eating Spam, I didn’t, so that explains some of the disparity. But you won’t be seeing this around here anytime soon: 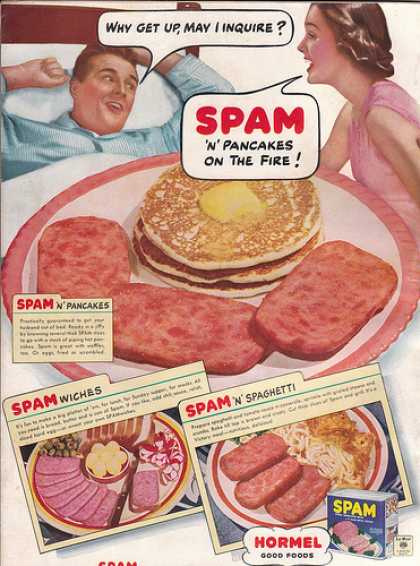 When I showed this ad to BF, he was quite interested in all three of these. He’s welcome to make them for himself. Thankfully this “cutesy” form of advertising has given way to more genuine styles, mostly, and with SEO (search engine optimization.)

All You Needed To Know

I hope you enjoyed today’s blog post; it’s been sitting in the draft folder for a while. If you really like the salty, cold canned meat, go for it! BF does, frequently. And now you know about the incredible variety of multicultural recipes that start with a simple can of Spam.

Of course, you can find plenty of recipes and information on the Spam website. There is also a gift shop for Spam merchandise and some cans. Some varieties of Spam are currently in short supply. But you can purchase Spam temporary tattoos, posters, magnets, postcards, T-shirts, Polo shirts, golf bags, and other quality merchandise that you didn’t know you needed. Want to learn more? Check out the company’s FAQ page.

At The Casa de Rurale

We actually have one or two cans in the kitchen somewhere. BF cracks open a can when he just doesn’t know what he wants for dinner. Sometimes it’s because he is in a place where food is being served that he doesn’t quite understand. He just takes his Spam sandwich and goes into a corner until it’s all over. Or, on rare occasions, I’m that mad at him that I let him feed himself, and he’ll find his way to a can.

One thing that worries me–if I go first, and I’m not there to make BF a healthy dinner, is he going to spend his days eating cereal for breakfast and Spam other times? Oh, well–if I go first, I guess it has to be up to him to eat healthily. I hope he’s learned a few things in the time I’ve been here.