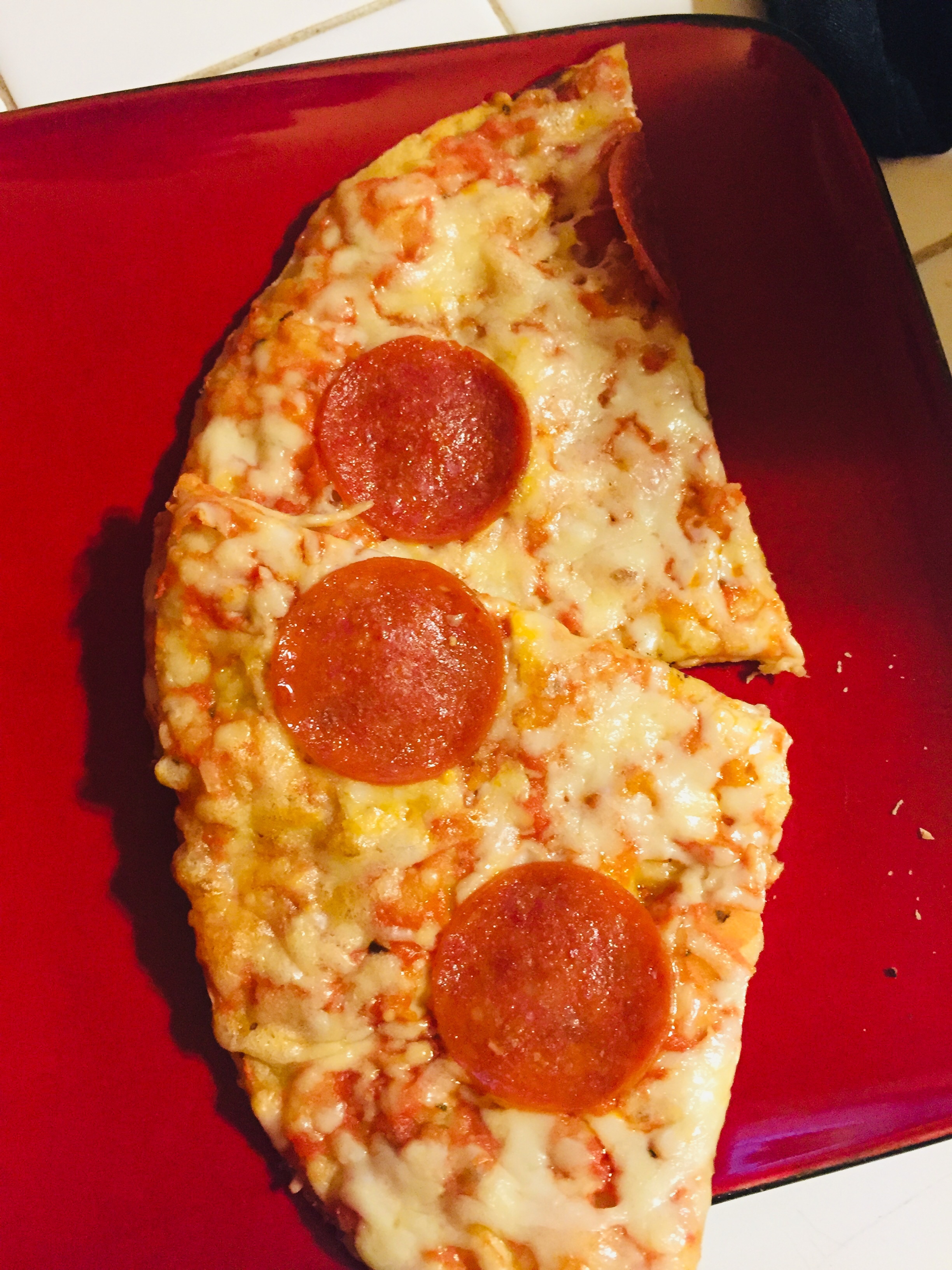 Frozen pizza: two words I never thought I would agree with. But there are healthier versions of it available now, and I’m very glad I found it.

I’m still enjoying the chorizo, but like the sweet potatoes and hummus butter, BF still won’t touch it. Good thing, because then I’d never get any. Friend of the blog AK lives way up in Idaho. When I posted a picture of it on Facebook with some scrambled eggs on top, she replied, “Would you please come visit and bring your culinary skills with you?” Honestly, I haven’t gone anywhere in a while, and still haven’t made it back to visit Houston yet.

Allergy update: the honey and stuff worked for a while, but I’m back to needing nasal spray and tissues. Too much sugar! I’ve purchased some heavier-duty allergen air filters for the HVAC and will be looking for a small, inexpensive air purifier to suck up the pollen and other allergens in here. If it works out, I’ll see about getting bigger one later for the whole house, or a couple for rooms.

In other news, the lovable pussy-cat pit bull is now 75 pounds. I swear, he’ll roll over and purr one of these days.

An Attempt At Backlinks

I got an email from Joan at TipsBulletin about cleaning and sealing granite, quartz and other countertops. If you’re interested, and you have these kinds of fancy-dancy countertops, here you go. The countertops here are what I would call “vintage Formica,” and is what you find the most in this part of the country.

How did we get to this point when Amy approves of frozen pizza? Like the tamales, it was an accident. I was walking through the Rouse’s in Hammond looking for something or other, and literally looked over and found this:

Cauliflower crust pizza! Low carb! Healthy! How did I miss this? Immediately, I grabbed one and put it in my basket. Having made one or two “regular” types in my life, I knew how to cook it:

When I took off the plastic, I arranged the slices nicely

Didn’t take long, and I had some lunch. Taste? DELICIOUS! No kidding, and I ended up eating. . .the entire pizza. Admittedly, I was really hungry, and it’s not a HUGE pizza.

Cooks up nicely but the picture isn’t so good.

What does it taste like? Very tasty, and everything you want a pizza to be.

For a handful of reasons, I told BF what I wanted for Valentine’s Day—dinner at home and a nice movie to watch. That means nothing with the words “alien,” “predator,” “blood,” “killer,” etc. I picked out a movie that I thought we could both enjoy: the animated movie called Sgt. Stubby. It tells the story of a little pup that *might have accidentally* joined the US Army in WWI. He actually went to war with his owner and was in France on the front lines. It did involve war, but is “kid-friendly,” so it satisfied BF’s need for that.

Because he was a dog, he had a very high-tuned hearing that could pick up incoming missiles before the humans could.  It also helped to save an entire French village from a gas attack. When his owner and French counterpart took shelter in a barn, they realized there was no gas mask for Stubby, so the Frenchman wet a small cloth and put it over his face. He survived just fine, and the people in the village were so happy, they constructed a canine-fitted gas mask for Stubby.

You can read more about this amazing doggie here, and the DVD is widely available.

Because Valentine’s Day can be fraught with peril for many who want “the perfect” day/night/whatever, I figured frozen pizza would be right up BF’s alley, and somewhat controllable.

So for me, it was Caulipower. For BF, it was his typical Red Baron:

Yes, this is still BF’s favorite

White flour crust and all, and it cooks up just like he likes it:

BF is happy with this

And I had mine. Together we watched the movie, had some delicious pizza of our choosing, and it went pretty well.

But BF still won’t taste the Caulipower pizza! (He says I haven’t tried to kill him in a while.)

So what’s in these? You can see the ingredient list for the uncured pepperoni version here. Not only is it gluten free, it’s low carb, because it doesn’t have a lot of high-carb ingredients that are common in gluten free products. Remember, there’s gluten free, and there’s “gluten-free.”

There is a whole listing of these products, and you can also buy a box of two plain pizza crusts, which friend of the blog MJ in Houston buys frequently.

I don’t know how I missed this. . .but I’m glad I found them, finally. Right up there with frozen tamales, although I’m more apt to eat one of these than fool with a few tamales.

Haven’t Tried It Yet

I’ve seen and heard about cauliflower pizzas for a while, and Ree Drummond has used several recipes on her show. You can find these recipes here, on The Food Network’s site.

It is a bit of trouble, and a tad messy, but that never stopped me before. I’ll have to try it one of these days for myself, BF optional.

Why haven’t I done this before? I dunno. . .I like cauliflower, and all, but it’s one of those things I just haven’t gotten around to trying yet. It’s not like I have a lot of taste testers here. . .and BF is a fussbudget about it. He also doesn’t like cauliflower, but I’m thinking he never had *good* cauliflower, either. Guess I need to break out one of those frozen crusts from the freezer and make him a pizza waffle again soon.

As if there wasn’t enough reasons to quit eating white flour, here’s more on the subject from the Living Traditionally blog. Anya has some interesting information on a lot of health subjects, including the dreaded soy. She also talks a lot about wheatgrass and collagen, but also has some generally good health information about a lot of everyday things.

A week later, I was walking around our local Walmart, breaking a 12-month personal boycott, and found another cauliflower crust pizza:

It was a little more than the Caulipower, and it looked like it was bigger.

Looks to be the same

Well, the box was. So I bought it, and anticipated a delicious lunch. “Anticipate” being the operative word here.  Looks good, with more pepperoni on top:

Into the toaster oven with it, and when it came out, I cut it with BF’s round pizza knife into 8 (or was it 10?) slices:

And let it cool a little, since there’s nothing worse than a burn from hot pizza, folks. But this pizza burned, even when following the directions on the box, which were similar to the Caulipower.

Verdict: C-. It’s OK, but it’s not really very good. Tasted like the Chef Boyardee variety my Mom used to make in the 1970’s. If you’re suddenly thinking, “hey, I remember those!” You can actually still buy them, no kidding. But it just tastes like a cheap imitation of Caulipower Pizzas. Had I not tried the Caulipower, I might have liked the RealGood better. But I don’t. Only if you’re in need of a pizza and can’t get anything else should you try this one.

I’ve bought Caulipower locally at both Walmart and Rouse’s, and I’m sure they’re available at HEB, Kroger and other big grocery stores. There’s a locator on their website, so you should be able to find it easily.

If you’ve not tried the Caulipower version yet, I highly recommend it. (If you try the other version, you’re on your own there.)