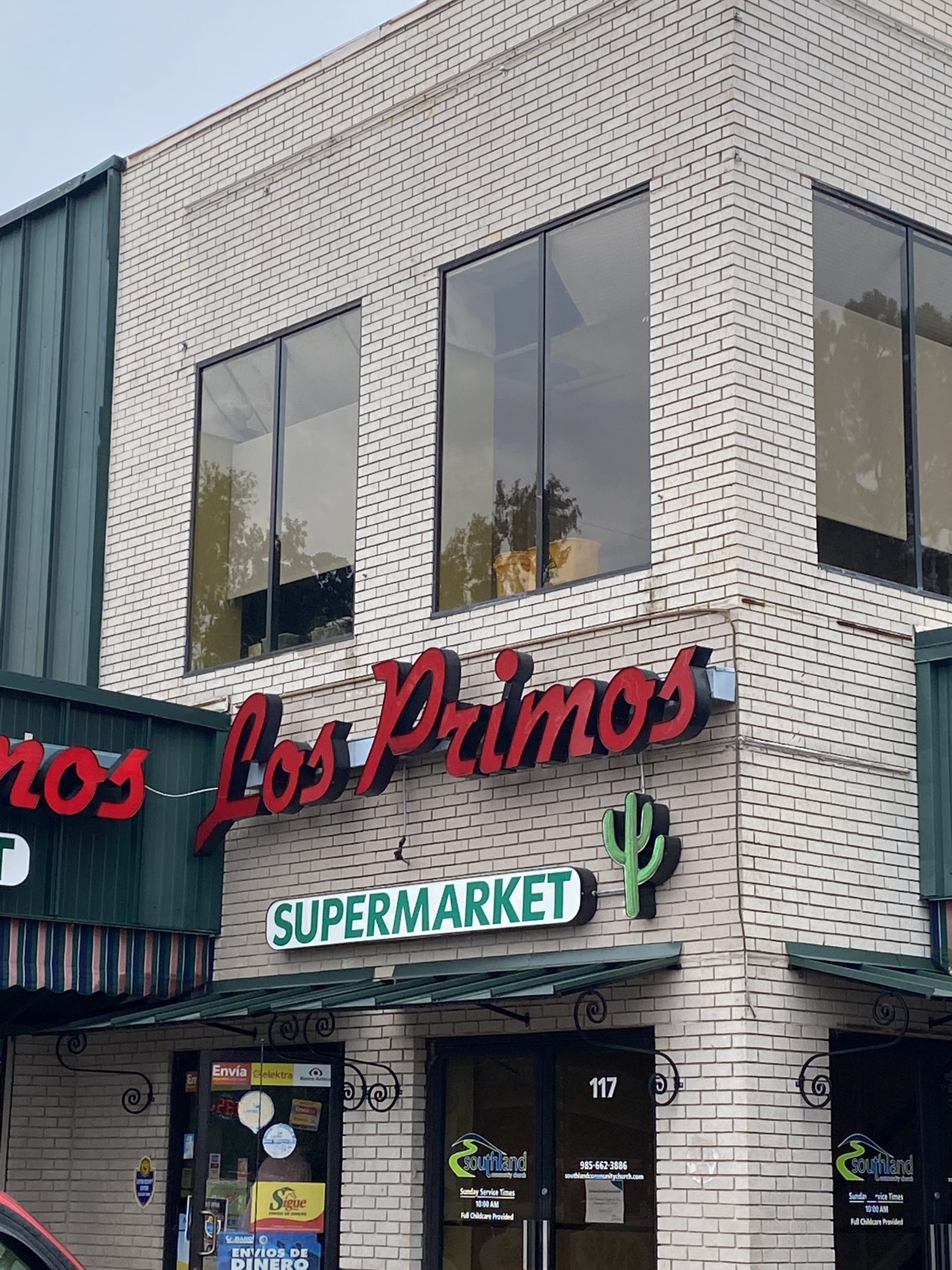 Los Primos is the little Mexican grocery store in Hammond. Let me take you to our local “little Mexico.”

OK–have you tried the Salsa Macha yet? I’ve emptied that big jar, and am down to the two small jars. Need to make a trip to Winn-Dixie for more peanuts, and soon, back to Hammond for more dried chipotle chili peppers.

I’ve used it on a few things and even eaten a small spoonful at a time. The warm, smoky flavor is amazing. What I’ve used it for the most has been. . .egg salad. No kidding. Slice or chop three hard-boiled eggs, and add them into a small bowl. In a separate small bowl (custard cups are good for this), mix about three parts of regular mayonnaise with one part Salsa Macha. Mix well, then mix in with the chopped eggs. Mix well and enjoy. That is fabulous. Unfortunately, I didn’t formally measure anything.

Oh, and BF finally did try it after I basically cornered him and twisted his arm (not physically.) I put about one-eighth of a teaspoon on a saltine cracker and asked him for his opinion. He’s always leery of anything with any kind of peppers in it, including sweet bell peppers. Peppers and tomatoes give him a bout of heartburn, especially at night. But I wasn’t asking him to eat a large amount, just a little taste. This shouldn’t give him heartburn, but he was adamant. He ate half of what was on the cracker and said it was “Ok, but I don’t want it again.” That was all I was asking for. So, more for me, and he gets heartburn from seemingly everything.

I’ve also started back working on my new copywriting website, which has been sitting idle for a while. Banana Rat is also doing a bit to help me with it, mostly the back-end stuff on WordPress.

Piggybacking on last week’s post, I want to tell you about an accidental discovery and a big surprise. Of course, BF never thought to tell me this place even existed.

The Casa de Rurale is a half-hour away from this sort of metropolitan city. It’s a little more than an hour north of New Orleans, and home to many “bigger city” amenities like Starbucks and Target. (It’s the closest of both to us.) If we can’t find it in either Walmart, Winn-Dixie, or Tractor Supply, chances are it’s on the list for the next trip to Hammond. We’ll visit Target, Rouse’s, Hobby Lobby, or a bigger Winn-Dixie while we’re there.

Hammond is also home to Southeastern Louisiana University, one of the top three universities in Louisiana, and also one of the fastest-growing. What does Southeastern have? College students from all over the US. So naturally, there’s Target, Starbucks, and other businesses they’ll know from home. It’s why there is a Trader Joe’s right outside LSU in Baton Rouge. You’ll nearly always see college students in there as well as local folks (and people like me who just love it but don’t live close by.)

When we go to Hammond for a shopping and foraging excursion, BF just smiles and gives me that same look when he looked into the very full pantry after I moved into his house. It’s the smile and the look that says, “Yes, dear, whatever you say.”

And it was on this day that we went to Baton Rouge, first to say goodbye to Alvin Calhoun. As we made our way back, he wanted to stop in Hammond–“it’s a surprise,” he said. I don’t normally like surprises–y’all know I’ve had way too many to think it’s going to be good. Thankfully, this one was different.

On the way home, BF decides we’ll be stopping for lunch at this little Chinese takeaway in a strip mall on Morrison Blvd. Before we get there, he just keeps telling me it’s a great little surprise.

Walking through the car park, hand in hand, I look over to my right and I see it:

How have I never seen this place before???

Could it be? A real Hispanic food store? It is! When I saw the words “envios de dinero,” in a sign on the door, I knew what was inside. I had to go inside and investigate.

Of course, BF had his little heart set on Chinese takeaway, and he had to physically pull me into the Chinese place. Not throwing shade on the nice Chinese place, but once I ordered I walked out. Because there’s a real Mexican grocery store in Hammond–right next door!

I left BF to take care of the rest and pick it up. Told him to text me when he was done and ready to leave.

Have you ever walked into someplace and your eyes just soaked up everything? That was me in Los Primos. The Spanish music was playing over the PA system, brightly colored stuff was everywhere, and I was the only Gringo in the place. This was the first thing I saw:

The brightly painted coffee cups, the clay pots, and the little shopping bags were my favorite.

I walked around a bit and saw the wall of dried spices, just like you’d see in Fiesta or Food Town:

Found the chipotle I needed!

Bought two of these

And other Hispanic spice-rack favorites:

They’re all here! (Although I don’t know what they’re all for.)

Sesame seeds were also needed for the Salsa Macha, and I was able to get a package here.

When I first moved to Houston, I was just shocked at all the different Hispanic, organic, and other specialty foods that were available in the regular grocery store. Stuff you just couldn’t even imagine buying in a grocery in New Orleans in 1998. But there it was, for anyone to purchase, no matter their ethnicity. I regularly bought one or two new things to try while I was in Texas, especially when I visited Phoenicia Foods on the west side.

While my eyes and ears were soaking this all up in Hammond (the first time), BF sat in the car park, in the cab of the truck, looking at Facebook. I think he was just afraid to walk into the place.

Los Primos also has a variety of groceries that are commonplace in most Houston grocery stores.

All kinds of things, and lovely decor hanging from the ceiling.

Goya is the largest Hispanic-owned food company in the US, and its products are available outside of the US as well.

I bet this is tasty.

And don’t forget your nacho chips:

Didn’t get these, but I could have

I got what I needed for the Salsa Macha:

Just what I needed!

I also bought another pound of fresh chorizo from the refrigerator case, as well as a couple of things to snack on during the trip home:

These didn’t survive the drive.

Pepitas (pumpkin seeds) are something I haven’t had in at least 5 years, and probably longer. They’re just not something people eat here, but they’re so delicious and I just love them. I used to have a recipe for roasted and spiced pepitas, but I think the cookbook is now long gone.

BF had been up since about 5:00 am and was tired, but still graciously took me to Los Primos the second time when I needed some ingredients. I did offer him both the almonds and pepitas, but he passed.

Although I didn’t buy anything this time, I did take pictures:

No, I don’t know what that all means, other than chicken and chorizo.

But I’d be willing to wager that this is chorizo:

I’ve never seen that much chorizo in one place before.

And because I don’t understand much Spanish, there was only one guy I could talk to–the nice guy at the one register! That’s OK. I told him I was making Salsa Macha, and he said, “Oh, that’s so good! You can get big containers of it at Costco, too.” Well, Costco is an hour drive in any direction, so I have to make it myself. Not that I mind.

There were folks putting up a little produce in the back. Not a big department, but they do have pinto and black beans in bulk bins, along with those little wagon wheels. (Never had those, and they’re wheat. You fry them up like croutons.) What I did get was some limos (limes.) At first, I didn’t realize that’s what they were. Look at the size of them:

That’s the biggest lime I’ve seen since I left Texas!

The young lady putting up produce didn’t speak any English, but she did know what I was talking about when I said “limes?” She responded, “Si, limos.” I responded, “muchas gracias!” Because I was so happy to find these monster-sized ones–all we get in Winn-Dixie and Walmart are the golfball-sized models. The smile on my face told her everything.

No seeds in these limos, so I can’t re-grow them, either.

It’s literally in the corner of this little strip mall, along with the Chinese takeaway, a donut shop, and a few other local shops. They’ve been in business for, as I was told, 11 years. They don’t have a website or any social media pages, either.

There’s A Restaurant Too

Just on the other side of the wall from the Chinese takeaway, Los Primos also has a sit-down restaurant that, I hope, we’ll be visiting one day soon. Apparently, it’s a great place for a cheap date, which is perfect for us! (La Carreta is nice but a bit pricey.)

Reviews are mixed online, with some saying it’s a great and authentic Mexican, others saying something else. Yelp has the most that I’ve seen so far, mostly positive.

I didn’t even realize there was a restaurant until I was leaving–the second time. I’m sure they thought I was bonkers, but honestly, it’s great to find such a place around here. Hopefully, it won’t be too long before we can have a “date night” here. My birthday is in October, so fingers crossed.

I’m working on a couple of upcoming topics, and there is another new book coming from Emilie Bailey, The Texas Granola Girl. Yes, it too is keto, but this one is vegetarian. I’ve already notified Miss Alice about the book, and I’m sure she and her daughter will eat it up. (Get it?)

The book comes out in September, and I may be lucky enough to get an advance review copy again. Based on the last two books from this lady, I can’t see anything being bad about this vegetarian food, whether for a side dish or for a main dish for people like Miss Alice.

If there is a topic you’d like me to explore and write about, by all means, let me know! I’m always looking for new blog topics. Leave a comment below, or use the contact form to get in touch. (I think I need to add a widget to the site so the contact form shows up everywhere.)